SpaceX Lands Third Consecutive Rocket, And the Video Is Breathtaking 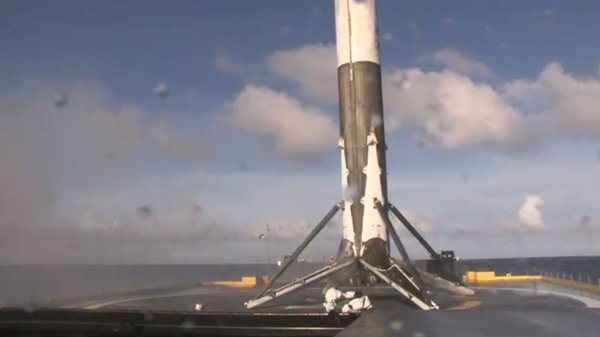 On Friday evening, SpaceX successfully landed another Falcon 9 rocket (or more precisely, its reusable first stage) back on Earth after a mission. These landings are a huge technical achievement, with big implications for spaceflight.

The footage is sped up (SpaceX (SPACEX) doesn’t say by how much), which is a bit frustrating. But what’s on display here is nonetheless mind-boggling. We see the rocket approaching Earth at an oblique angle, firing directional thrusters as it lines itself up, then a larger blast to slow down as it approaches a drone barge off the coast of Florida.

In the video, you can just make out the drone ship’s name, Of Course I Still Love You. That name is a reference to the Culture series of books by Ian M. Banks, a sci-fi epic about an advanced spacefaring society. And that is what SpaceX’s reusable rockets promise to help us become by making travel to space much cheaper.

While this third landing is another major step towards that goal, SpaceX has not yet actually reused a rocket. The final test of the big goal’s viability will be whether the company can affordably and efficiently return an already-used craft to flight readiness.

For more on space, watch our video.

Like all SpaceX missions, this launch had a commercial purpose. It delivered the 3,000 kilogram (6,613 pound) THAICOM 8 communications satellite to a position around 91,000 km (around 56,000 miles) above earth, to start what’s known as a supersynchronous orbit. From that huge distance, the satellite will eventually settle into an orbit around 35,800 kilometers from Earth, where it will provide communications for South and Southeast Asia. From liftoff to landing, the entire mission lasted about nine minutes.