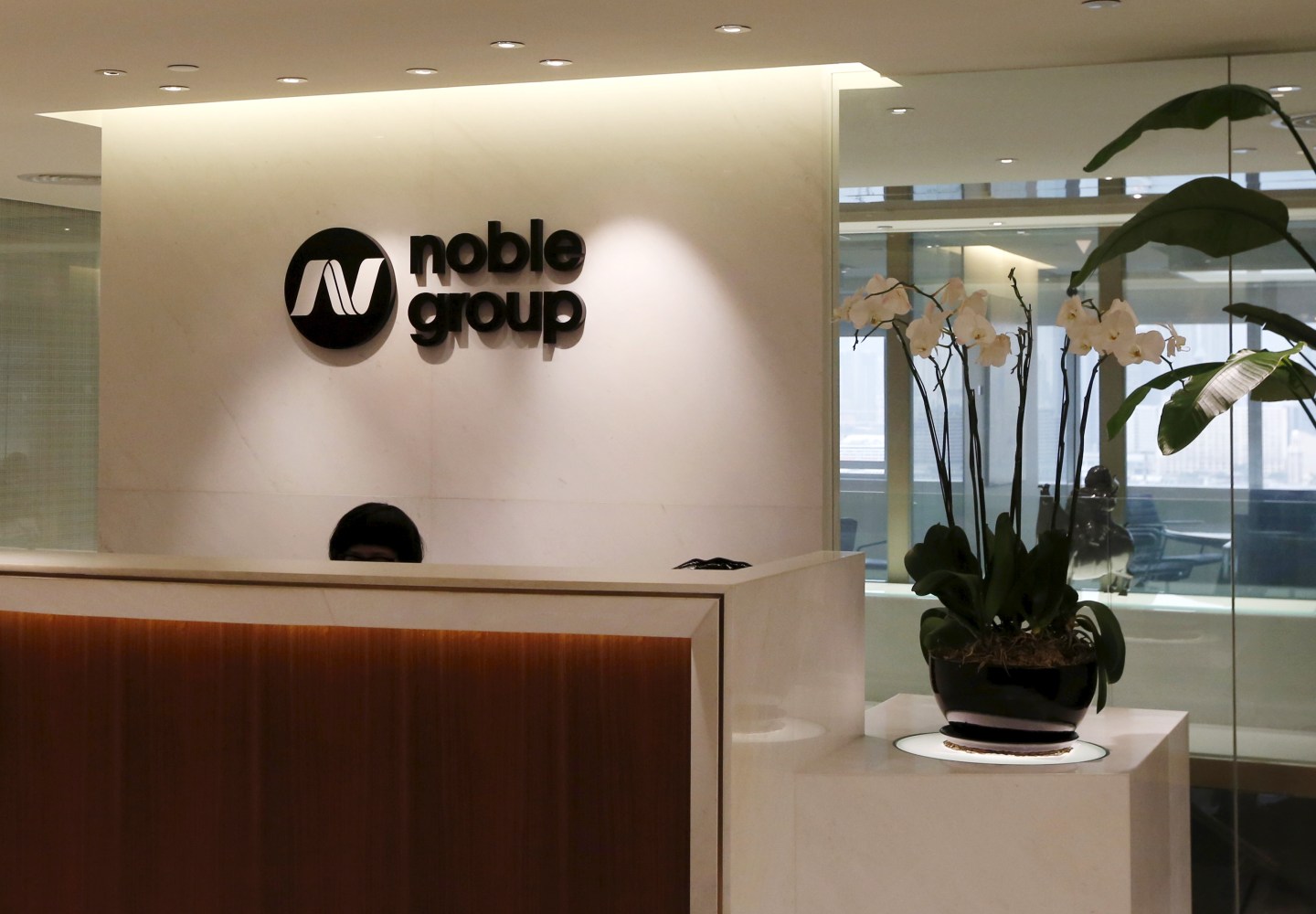 The reception of Noble Group is seen at its headquarters in Hong Kong March 23, 2015. Commodities trader Noble Group Ltd, the target of reports by Iceberg Research, said on Monday it plans to start legal proceedings after the little-known anonymous research blog accused it of inflating profits and understating its debt. Iceberg issued its third report on Noble on Saturday, saying the Hong Kong-headquartered group had substantially understated its gross and net debt, charges Noble has rejected. Noble's shares have lost as much as $1.8 billion in market value following the reports and the company has pledged to provide more disclosures to improve transparency. REUTERS/Bobby Yip - RTR4UFZ2
Photograph by Bobby Yip — Reuters

The embattled company named its president William Randall, and Jeff Frase, global head of oil liquids, as co-CEOs and said it would begin a sale process for Noble Americas Energy Solutions, which it had indicated to be valued at over $1.25 billion in August 2015. The changes are with immediate effect.

The sale move is aimed at boosting the balance sheet of Singapore-listed Noble, which has been battered since early last year by a bruising accounting dispute and weak commodity markets.

“The first task is to stabilize the situation and convey stability and continuity,” said Nirgunan Tiruchelvam, an analyst at Religare Capital Markets. “That would be the immediate task of somebody in this business which has volatility,” he said.

Noble (NOBGY) was accused in February 2015 by Iceberg Research of overstating its assets by billions of dollars, claims which Noble rejected. Since then, Noble’s market value has plunged by about 75%, or over S$6 billion ($4.35 billion), to S$1.8 billion and its debt costs have risen as it lost its investment grade rating and battled the worst commodity price rout in decades.

The shares shed 8% on Monday.

Alireza, a former Goldman Sachs Asia co-head who joined Noble four years ago, steered it into selling assets and cutting business lines as part of a radical transformation to become a company which did not own bulky assets.

With the transformation process now largely complete, Alireza considered that the time was right for him to move on, Noble said. Alireza did not immediately respond to a request for comment.

Under his watch, Noble made small investments in commodity producers to secure marketing and supply rights, in some cases for as long as 20 years, according to sources.

Critics have said the company booked profits upfront on some of the contracts, which were based on overly-optimistic assumptions about commodity prices. Noble has defended its accounting policies, and board-appointed consultants PricewaterhouseCoopers found it had complied with international accounting rules.

“The resignation of Alireza is a positive development in my view. It possibly signals a less aggressive approach to trading assets and profit recognition on long term contracts,” said Charles Macgregor, head of Asia at credit research firm Lucror Analytics.

Noble has grown to become one of the world’s biggest traders of commodities from coal to iron ore to oil since Chairman Richard Elman set up the group with $100,000 in 1986.

But worries over Noble’s finances have roiled investor confidence. In February 2016, Noble reported its first annual loss since 1998, battered by a $1.2 billion writedown for weak coal prices.

Earlier this month, Noble finalized $3 billion in credit facilities, a crucial move allowing it to refinance all of its debt maturing this year as it reported a 62% fall in quarterly profit.