The Race for the Least Bad Presidential Candidate 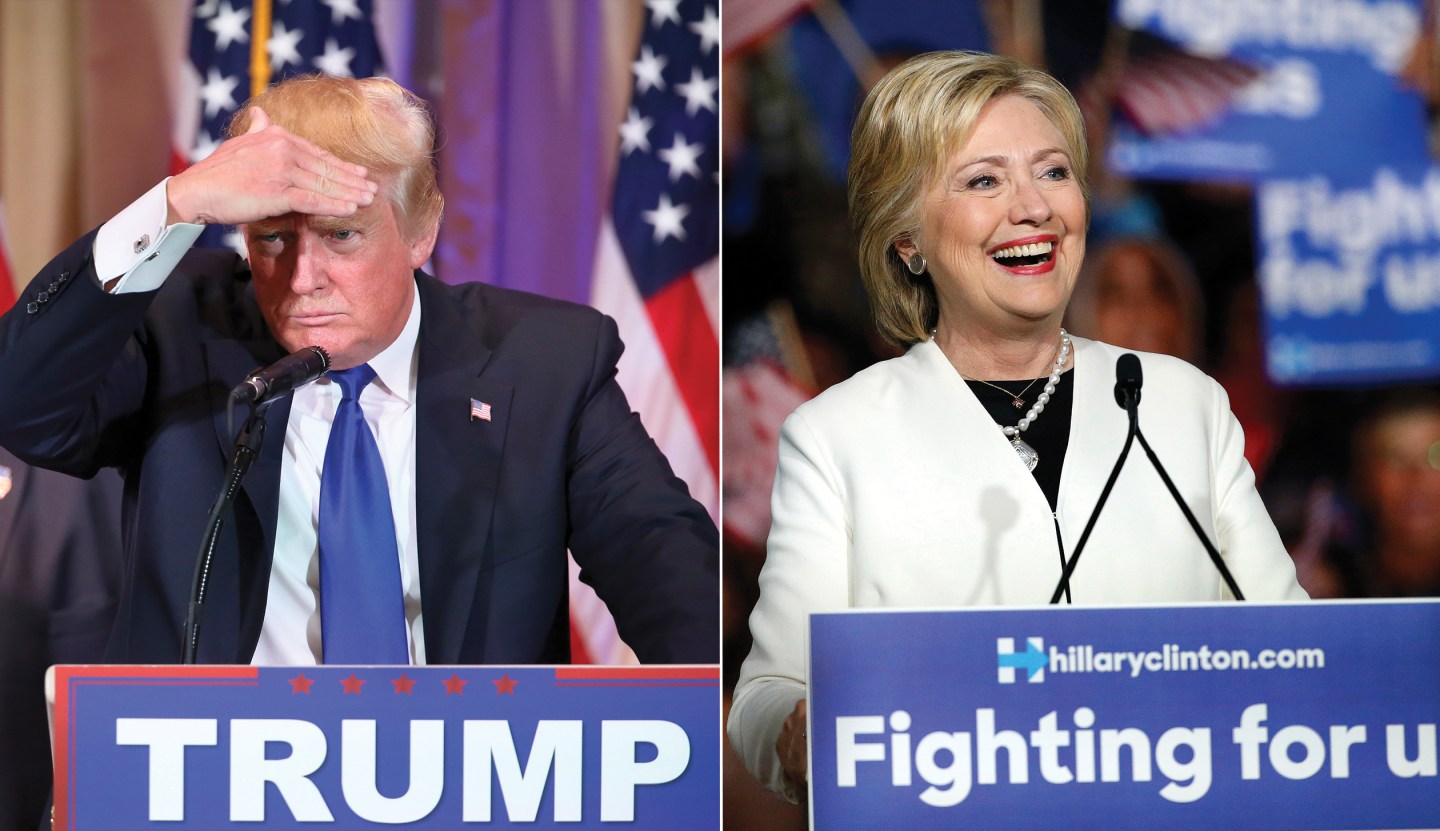 At this point in the 2008 presidential race, when both parties’ candidates had become apparent, the Economist put John McCain and Barack Obama on its cover under the line “America at its best.” The magazine described McCain as “a man whose political courage has led him constantly to attempt to forge bipartisan deals and to speak out against the Bush administration when it went wrong.” It said Obama had “demonstrated charisma, coolness under fire and an impressive understanding of the transforming power of technology in modern politics…. Even greater, though, is his achievement in becoming the first black presidential nominee of either political party.”

Contrast that assessment with Americans’ own views of their candidates this year. In a new Fox News poll released on Wednesday, registered voters say they consider Donald Trump and Hillary Clinton dishonest, untrustworthy, immoral, uncaring, unreliable, selfish, and willing to say anything to get elected. On every one of those dimensions, more voters believed each candidate fit the description than felt otherwise.

After a year of campaigning that has exhausted the candidates, the media, and the voters, this is the result. Each party has chosen a presumptive nominee whom America loathes. Each party is about to nominate the least liked candidate from his or her field as it stood a year ago. These will be the least liked nominees in the history of U.S. polling.

How did it come to this? Three potential explanations:

-The procedures were flawed. Because the Republican field was crowded, Trump never achieved majority support in any primary or caucus from January until May. With percentages that were sometimes only in the low 30s, he nonetheless got the “winner” label and the resulting momentum. A different voting procedure, such as one in which voters designate second and third choices to be applied until some candidate gets a majority, could have produced different outcomes and a different nominee. But this explanation applies only to the Republicans, and in any case what happened this year demands a deeper explanation than voting technicalities.

-The best candidates won’t run. You hear this all the time, and there is certainly something to it. Where was House Speaker Paul Ryan for the Republicans? Where was Colorado Governor John Hickenlooper for the Democrats? Yet the Republican field included at least a few substantive, experienced, grown-up candidates – Jeb Bush, Lindsey Graham, John Kasich – and none of them came close. Which suggests we need an even deeper explanation.

-Something weird is happening with U.S. culture broadly. Maybe we no longer care whether we actually like the candidates. Maybe we just want to express our anger or hatred of the other side. Or something. Maybe we see the whole process as a reality TV show in which we get to participate. In an entertainment-based culture, we can have a lot of fun with the villains as well as with the heroes.

Back in 2008, the Economist’s McCain-Obama article concluded, “On the face of it, this is the most impressive choice America has had for a very long time.” This year, “most” has become “least.”