Majority of Nike’s U.S. Employees Are Minorities For the First Time 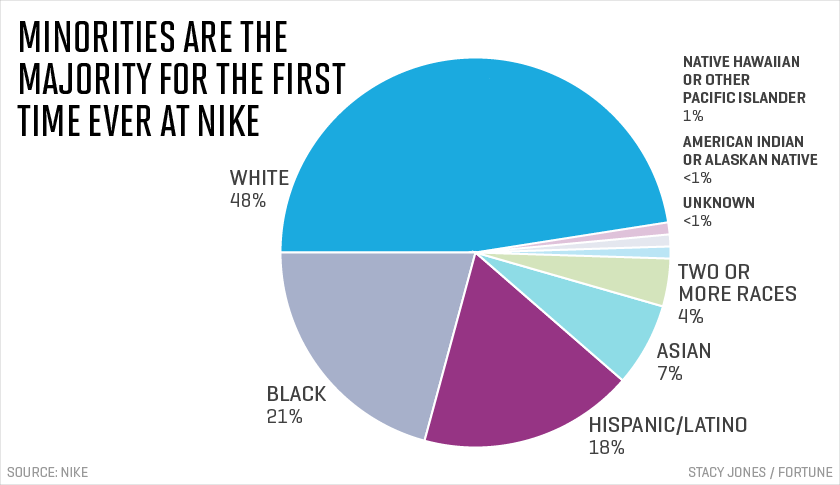 Nike has revealed that ethnic minorities now make up a slight majority of the athletic-gear maker’s U.S staff.

In a broad business report focusing on sustainability and staffing, Nike (NKE) said that in fiscal year 2014/2015 for the first time ever, the percentage of Nike employees who identify as non-white in the U.S. rose above 50%. For fiscal year 2015, 15,326 members of the U.S. staff identified as white, roughly 48% of the 31,977 total.

Black/African American employees make up 21% of Nike’s staff in the U.S., while Hispanic/Latino workers were 18%. Asians were 7% of the domestic employee base. Pacific Islanders, American Indians and individuals that reported two or more races made up the rest.

“To serve every athlete individually and completely, across hundreds of countries where we do business, we need teams that reflect the diversity of our consumers and a culture of inclusivity that respects the communities in which we live and work,” Nike said in a statement.

The gender split is fairly even. Women make up 48% of Nike’s global workforce though in management roles, their ranks total 41%. The male-female split has been fairly consistent in recent years.

Nike last publicly shared diversity/ethnicity staffing stats in fiscal 2012/2013. Since then, diversity in corporate America has become an increasingly important topic. Many headlines have focused on the tech sector, mostly calling out that industry’s dismal self-reported figures, which indicate that minorities and women make up a slim percentage of staffing. And Fortune published a deeply reported story focusing on some of the challenges keeping black men out of executive positions.

In an opening letter to the Nike report, CEO Mark Parker said the company believed that diversity “fosters creativity and accelerates innovation.” He added that different perspectives can fuel ideas and noted that for Nike to achieve a diverse workforce, the company has made efforts to recruit, promote, and retain diverse talent globally.

While Parker lauded the progress, he added that the company wants to continue to bolster representation of women and people of color on the Nike roster.

Across America’s biggest corporations, one trend worth noting is that while many companies are making greater strides to increase diversity among their ranks, that inclusion is less apparent in top management and board member roles. At Nike, diversity thins out at the top as well. Women hold just three of Nike’s 14 board seats. And 11 members of the board are white. U.S. leadership/management is 80% white, a figure that has remained relatively consistent in recent years.

Nike’s board is notably more diverse than main U.S. rival Under Armour (UA). At Under Armour, all 10 board members are white and nine of them are men.

Nike says that it has added more than 800 female managers to its staff between fiscal year 2012 and 2015. The company also says that racial and ethnic diversity within Nike’s “People Manager” team has increased by 5% over that period. Still, it acknowledges more needs to be done.

“This represents positive progress, but we also recognize that there is still work ahead,” Nike said.

Stacy Jones contributed to this report.