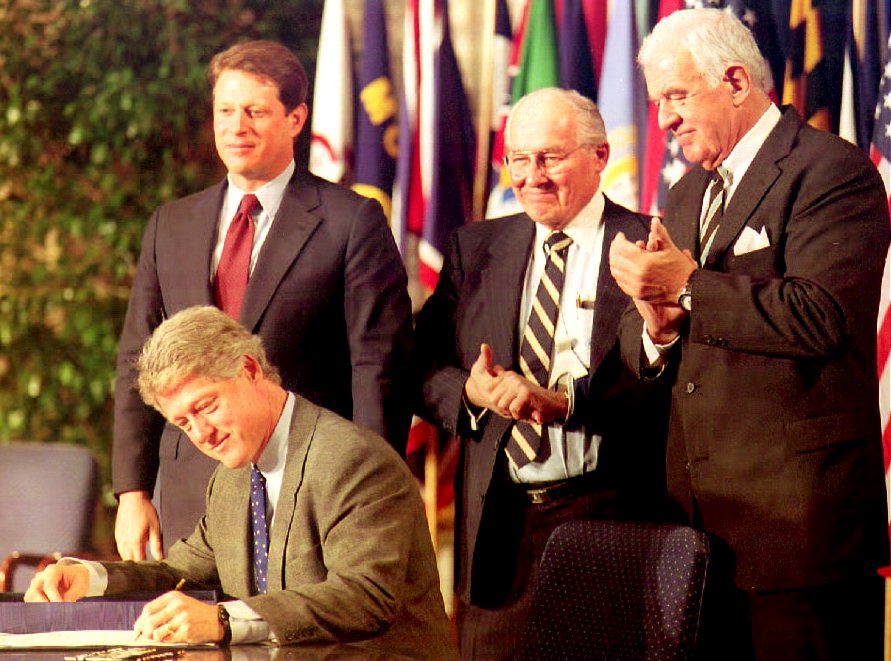 Historians may look back on 2016 as the year that America’s decades-long march to ever freer trade finally came to an end.

If you look at the results of the presidential elections so far, it’s difficult to come to any other conclusion. The presumptive Republican nominee, Donald Trump, really only departed from Republican orthodoxy on one issue—the idea that free trade agreements like NAFTA have been, on balance, good for America. Trump, and his supporters, say this isn’t so.

On the Democratic side, too, the Bernie Sanders insurgent campaign forced Hillary Clinton, a politician with a long track record of supporting free agreements, to abandon the Trans-pacific Partnership, a free trade agreement currently under consideration, that she pushed for as Secretary of State.

But if you ask attendees at the Milken Institute Global Conference being held in Los Angeles this week, free traders shouldn’t worry. During a panel on the topic of globalization, Tony Fratto, who worked in the Bush Treasury Department, argued that polls show that a majority of Americans see trade as an opportunity rather than a threat.

Undersecretary for International Trade Stefan Selig added that there is a misconception that young people are anti-capitalist or anti-free trade by pointing to a poll that showed that 67% of millennials are in favor of trade, even more than their older counterparts. These views were echoed by economist Tyler Cowen, who argued during a panel on Tuesday that we shouldn’t be concerned about a growing socialist strain in American society:

I know that if you listen to Bernie Sanders, or look at some polls, a lot of young people have more sympathy for what they call ‘socialism’ than ever before, but I don’t think they mean real socialism. If you ask Americans questions such as ‘Do you support trade?’ the answers are more positive today than they were five years ago. …So if you look at a lot of basic issues of tolerance, belief in the system, people accepting consumerism, heralding innovation, I think, mostly, people here believe in capitalism.

It’s not surprising that attendees at a conference like Milken, which brings together some of the biggest names in finance and industry, are pro free trade and want to believe that most Americans are too. The financial services industry was, after all, one of the big winners of NAFTA, which struck down barriers that prevented Wall Street from selling its services to Mexico.\

But the ease with which Milken attendees are writing off the results of the 2016 presidential primaries is pretty surprising. Nobody at the conference addressed the fact that—even if the polls they cite are to be trusted—such small majorities are no guarantee of successfully pushing free trade agreements through Congress. Just ask gun control advocates what having majority support for a policy proposal does for you, if those on the other side of the issue are more animated.

Worse still for advocates for free trade is that there’s no evidence that rescinding these agreements, as for instance Donald Trump hopes to do, will actually lead to improved economic outcomes for working Americans. And if repealing NAFTA makes these folks even worse off, there’s little reason to believe that isolationists will come to their senses and realize that the rise of China would have happened with or without American acquiescence. And that manufacture jobs would have been lost to technology with or without NAFTA. This could lead to further clamping down on trade, resulting in further declines in living standards.

Rather than take comfort in one or two polls, America’s economic elite should be falling over themselves to offer pro-active solutions for boosting the incomes of the broad middle class. But there is little evidence from the Milken Global Conference at least that elites are ready to put aside their differences to jointly beat back the populist tide that is washing over America as we speak.