Larry Summers Believes in Blockchain, Not Sure About Bitcoin 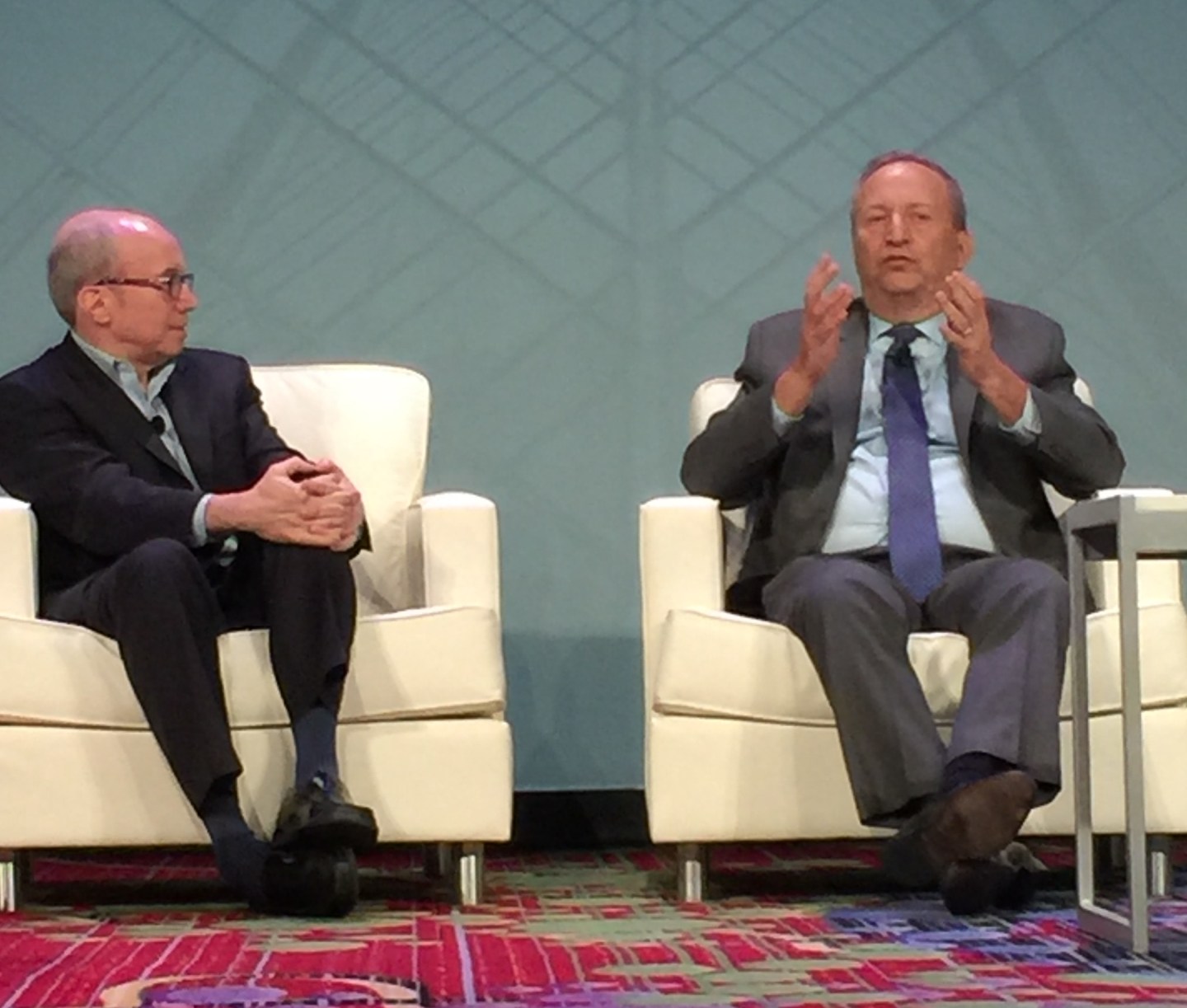 Larry Summers knows a thing or two about money. He ran the Treasury Department under President Clinton, and his signature is on the $20 bill. When he has a gripe about the price of something, it’s worth paying attention.

So what’s bugging him today? Speaking to a room of finance leaders in New York, the present day counterpart of Alexander Hamilton groused about the price of earphones.

“In a world of very sophisticated information technology, it’s kind of a remarkable thing that if I go outside and buy a $400 pair of headphones, $8 will be removed for processing the payments. That’s a lot,” he told Fortune’s Alan Murray at Consensus 2016, a three-day event about financial technology.

The source of Summers’ ire, though, is not the price of electronics. Instead, the point of his comment was how the U.S. financial system still permits middlemen, like credit card processors, to extract a 3% levy on every consumer transaction, and even more in the case of big ticket items like houses.

In the future, Summers believes that much-hyped blockchain technology will let banks and other financial institutions clear transactions infinitely faster than they do now. And at a small fraction of the cost.

The blockchain, if you’re unfamiliar, is the idea of a permanent online ledger where all sorts of transactions—from contracts to payments to title transfers—can be recorded and verified in a tamper-proof record. Currently, banks and business technology companies like IBM (IBM) are pouring money into the concept in the belief that it will dramatically reduce the amount they pay to clearing houses and other record keeping outfits.

Summers’ speech comes at a time when blockchain is achieving a mainstream respectability that has eluded bitcoin, the digital currency that uses the same ledger technology. While many people continue to value the public ledger associated with bitcoin, the backers who champion the currency are regarded by some as deluded fanatics. (One noted digital currency skeptic is JP Morgan CEO Jamie Dimon, who offers a cutting rant in the video below).

Summers, however, is less skeptical, telling Murray that he can see a future in which the financial system is based on blockchain and dollars, or perhaps also bitcoin or some other form of digital currency. (Those who like their fin-tech analysis with a grain of salt may wish take note of this FT article, which describes Summers role on the board of a bitcoin startup).

“Is the blockchain technology going to be fundamental to reducing fictions? The answer is overwhelmingly likely to be yes. Is bitcoin going to be a valuable store of value like people use gold? I don’t know,” said Summers at the event.

As for when the blockchain’s vaunted potential to reduce costs will actually materialize, Summers urged patience. He predicted the technology will display a typical j-curve effect, lowering productivity at the outset while companies rush to invest, but then yielding dramatic improvements further in the future.

So how much virtual currency does Summers own? For now, it looks like the former Treasury Secretary still prefers benjamins over bitcoins: Summers admitted he has yet to acquire any through Circle or any other currency services. At the close of the interview, Murray gave him 1/100 of a bitcoin to get him started.