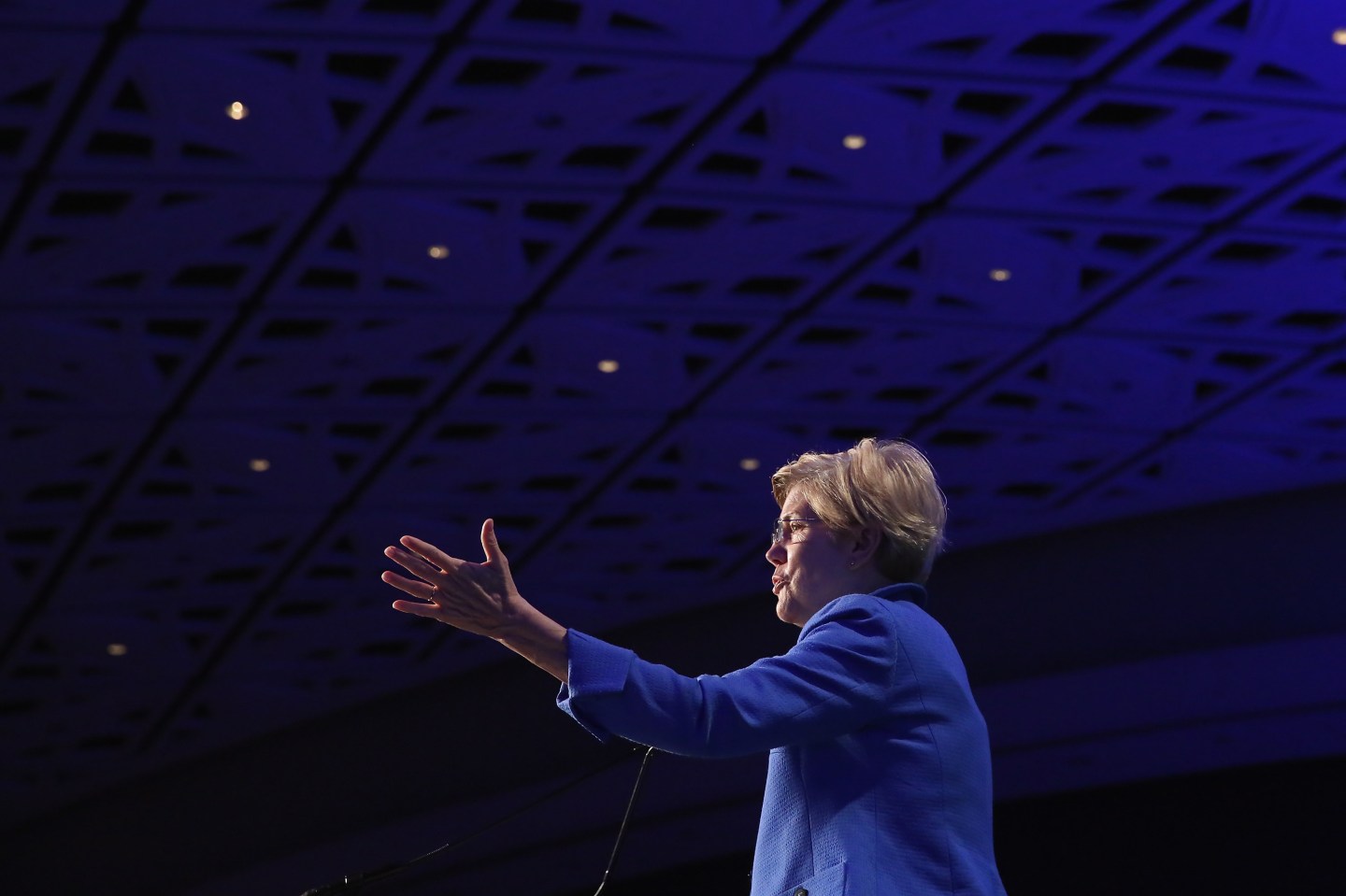 Massachusetts Senator Elizabeth Warren has yet to endorse a Democratic candidate in the race for the White House, but she made it abundantly clear Tuesday night that she’s for whoever Donald Trump is against.

As Trump emerged Tuesday night as the winner of Indiana’s Republican primary—all but clinching the party’s nomination for president—Warren took to her Facebook page to verbally assail the billionaire businessman and urge people of all party affiliations to stop him from winning the general election.

As Warren, a Democrat, began her tirade, it seems as if Trump’s victory in the Republican nominating process was still sinking in. “Donald Trump is now the leader of the Republican Party. It’s real – he is one step away from the White House,” she wrote, before letting loose on the GOP frontrunner.

Here’s what else is real:

Trump has built his campaign on racism, sexism, and xenophobia. There’s more enthusiasm for him among leaders of the KKK than leaders of the political party he now controls.

He incites supporters to violence, praises Putin, and, according to a columnist who recently interviewed him, is “cool with being called an authoritarian” and doesn’t mind associations with history’s worst dictators.

He attacks veterans like John McCain who were captured and puts our service members at risk by cheerleading illegal torture. In a world with ISIS militants and leaders like North Korean strongman Kim Jong-Un conducting nuclear tests, he surrounds himself with a foreign policy team that has been called a “collection of charlatans,” and puts out contradictory and nonsensical national security ideas one expert recently called “incoherent” and “truly bizarre.”

She then issued a call to action, pleading with Americans to oppose his candidacy and casting a Trump presidency as a doomsday scenario.

What happens next will test the character for all of us – Republican, Democrat, and Independent. It will determine whether we move forward as one nation or splinter at the hands of one man’s narcissism and divisiveness. I know which side I’m on, and I’m going to fight my heart out to make sure Donald Trump’s toxic stew of hatred and insecurity never reaches the White House.

Last year, Warren dismissed calls within her party to run for the Democratic nomination, and she’s now being mentioned as a possible running mate for Hillary Clinton. She’s become increasingly vocal about the presidential contest in recent weeks but has directed her comments primarily at GOP candidates. In April, Warren launched a fiery Tweetstorm against Texas Senator Ted Cruz, blasting him for a fundraising email that portrayed him as a victim. “Are you kidding me, Ted Cruz? We’re supposed to pity you because trying to be the leader of the free world is hard?! 2 words: Boo hoo,” she wrote. Cruz suspended his campaign Tuesday night after a poor showing in Indiana, all but crowning Trump as the Republican party’s nominee.

Fortune asked the Trump campaign for a comment on Warren’s remarks and will update this post if his camp replies.