Verizon Strikers to Get Paid From $400 Million Union Fund 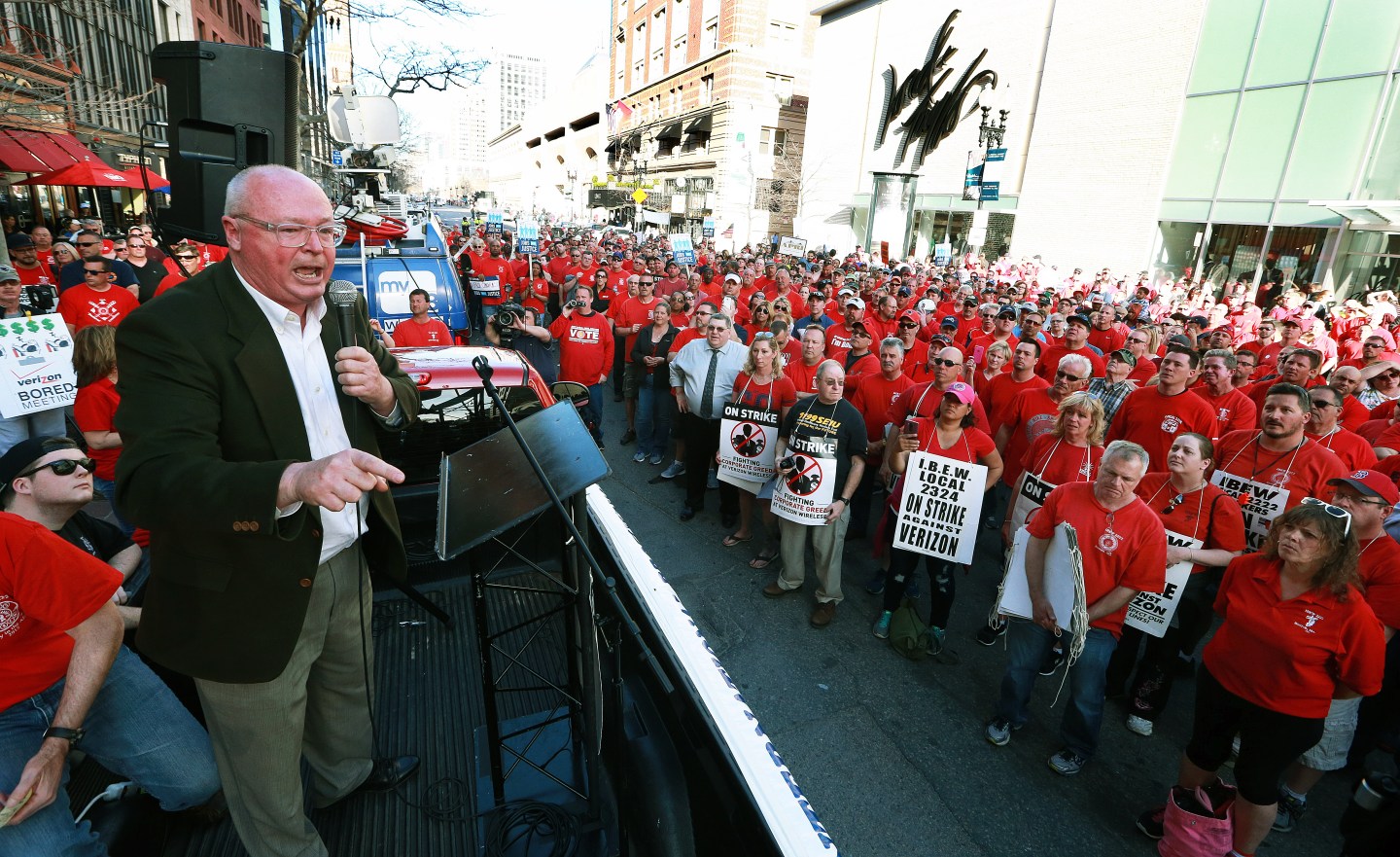 BOSTON, MA - APRIL 21: Striking Verizon employees staged a rally in Copley Square, followed by a march to a Verizon Destination Store on Boylston Street, where union officials spoke to the crowd from the back of a pickup truck. Traffic was diverted for a couple of blocks to vehicular traffic at rush hour due to the event. Steven Tolman, the president of the Massachusetts AFL-CIO is pictured addressing the crowd in front of the store. (Photo by Jim Davis/The Boston Globe via Getty Images)
Photograph by Jim Davis — Boston Globe via Getty Images

The nearly 40,000 Verizon workers on strike will start receiving payments this week from a $400 million union fund to offset lost wages and benefits.

As the strike finishes its third week on Tuesday, both sides appear to be digging in for a longer job action than many anticipated. That could take a toll on Verizon’s business because most of the strikers work in servicing or installing wireline telephone and FiOS Internet and television service.

Just a week into the current strike, Verizon (VZ) CFO Fran Shammo told analysts that the company was assuming no financial impact, at least in the second quarter. And five years ago, a similar strike lasted only about two weeks, though the sides then took another year to reach a contract.

But on Tuesday, representatives of the Communications Workers of America said they were prepared for a lengthy walk out. “We think the strike is quite strong and the people are not crossing the lines and we have not seen anything that resembles concerns by members about going back to work,” George Kohl, senior director for collective bargaining at the CWA, said on a call with reporters. “Their concern is to have something to have for the future. It’s a quite dedicated strike.”

In another sign of digging in, Verizon last week said it was adding “thousands” more temporary workers to its replacement workforce of thousands. Verizon initially relied on non-union employees who had been specifically trained to replace the strikers. The second wave of replacements consisted of employees on special assignment and contractors currently enrolled or recently graduated from the company’s technical training program.

On Tuesday, Verizon said more than 20,000 employees and contractors had installed thousands of new orders since the strike began. “While we strongly desire to reach a reasonable agreement with union leaders, we are also confident that Verizon customers fully understand our position,” a Verizon spokesman said. “Providing outstanding customer service is and will continue to be a top priority for Verizon during this work stoppage. Nothing will keep that from happening.”

The two sides met as recently as Monday, but are not close to agreement. Last week, Verizon offered what it called its “last, best offer” to end the walkout of workers from Massachusetts to Virginia. But the two unions involved, the CWA and the International Brotherhood of Electrical Workers, said the offer was disappointing and not serious.

Verizon is willing to offer wage and benefit concessions, but union members are worried about proposals to outsource call center jobs to Mexico and the Philippines, increase the use of non-union contractor installers, and allow employee transfers to other cities for up to two months at a time.

“Wages and benefits really don’t matter if we don’t have jobs,” Louise Novotny, research director at the CWA said.

The union also said it was pushing Verizon investors to support several proposals up for a vote at the company’s annual meeting this week, including rules requiring an independent chairman and a shareholder vote on executive severance agreements.

Shares of Verizon were down 1% in mid-day trading on Tuesday. The stock is up 9% so far this year.