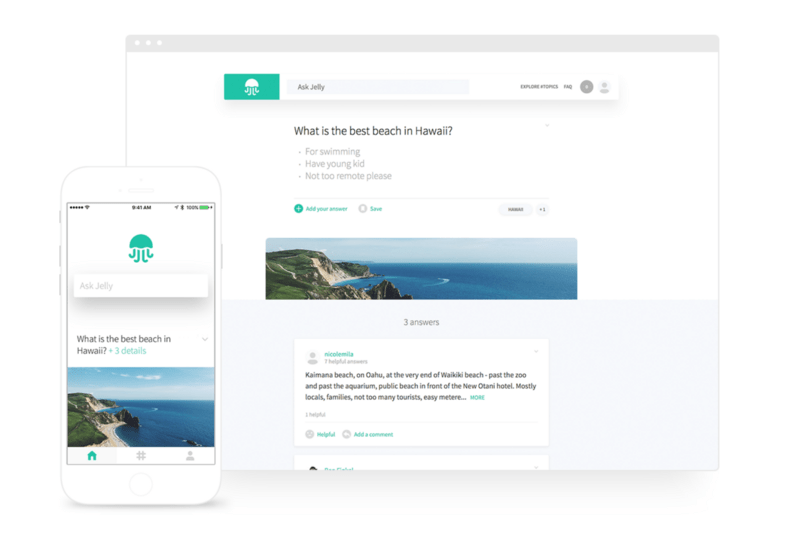 Last year at Austin’s annual South by Southwest tech festival, Twitter co-founder Biz Stone sat on stage and talked about how his supposed third act, a funky question-and-answers app named Jelly, had failed and how his company was abandoning the project. But things didn’t go quite as planned.

Stone, instead, is pushing for a second time to make Jelly a success. Jelly 2.0, as Stone refers to the revamped version, which invites users to query others about virtually any topic, is now publicly available for free to users on iOS and the web, the company said on Thursday.

“Our thing is really about helping you get through your day,” Stone said in an interview at Jelly’s office. Ideally, people will ask questions like, “Who is great real estate agent in San Francisco?” or “What’s a good snack for my kid at school?”

The revamped Jelly has a few noticeable changes to folks who used the first version. Asking questions can now be done anonymously and it does not require creating an account because, as Jelly’s team realized, people are more apprehensive to ask questions when their identity is known. “Imagine if a Google search was a tweet—you’d not search for 99% of the things you do,” Stone said last month during a return visit to South By Southwest.

The Jelly team also tossed out its initial thought that users could find answers from others in their social media networks. As Stone explains, while that might work in some cases, fielding questions to people with expertise in a topic is much more efficient, so that’s how the new Jelly works.

“We should start from scratch and build what we should have built from the beginning,” Stone told his fellow Jelly co-founder, Ben Finkel, when the two sat in their office’s conference room to discuss Jelly’s fate. The conversation was supposed to be about how to completely kill off Jelly and fully commit to their new app, Super, which lets users create and share colorful collages that include a superlative like “My favorite animal is the pug.” But as the discussion continued, they decided they couldn’t give up on Jelly just yet.

“Ben, this is gonna be really awkward, we’re gonna have to tell the team that we’re going back to Jelly after we said it would over,” Stone told his co-founder.

To make light of the situation, Stone says he came up with the idea of calling it an “un-pivot,” a joking take on the popular Silicon Valley term of “pivoting,” or drastically shifting a company’s focus after an initial product flops. Soon enough, the press was having fun with it too. BuzzFeed published a list of “History’s 8 Most Important Un-Pivots,” featuring Prohibition and Michael Jordan’s return to basketball after a brief stint in minor league baseball.

Surprisingly, the story of how Stone came up with the idea for Jelly isn’t all that riveting. As he tells it, the idea occurred to him while taking a walk with Finkel, a close friend of his from Twitter. Finkel, who Stone describes as one of the smartest people around and a talented engineer, soon quit his job at Twitter, and the two started working on Jelly.

“We think the future of search in general is no results. You ask a question, you get the answer,” said Stone. On the conference room table next to him was an Echo, Amazon’s voice-activated gadget for shopping, playing music, or other tasks. Though Jelly was founded before Amazon released the Echo, it’s become a good proxy for how Stone envisions the next phase of search engines. Sure, the Echo can’t answer any and all questions at the moment, but it also doesn’t provide its owner with pages and pages of results to wade through.

For now, getting an answer through Jelly takes anywhere between a few seconds to 10 to 15 minutes, but as the company adds more and more users, Stone hopes it will provide a quicker turnaround. Since every startup needs some sort of vanity metric, “average time to first answer” is Jelly’s.

Right now, all answers are submitted by users in response to individual questions. Although it sounds crazy that people will voluntary spend their time answering strangers’ questions, Stone claims that it’s in fact something people want to do. “People love answering the questions, especially when they know the answer” because it’s a topic they know well, he said. Users can select topics they’re experts in, and the app will route relevant questions to them.

Eventually, Jelly will also start to recycle answers for similar questions and even further down the line, it could also pull information from certain websites and serve up quick answers, similarly to Google’s “Featured Snippets,” though he wouldn’t say more about this.

Jelly is of course not the first attempt at human-powered answers—there’s already Yahoo Answers, which gained decent traction after it debuted in late 2005, but was then overwhelmed by spammy and low quality responses. Quora, a seven year-old service that is popular with Silicon Valley insiders and has maintained a relatively high quality, is another example.

But perhaps what’s most interesting about Stone, is that he seems quite comfortable with the unknown, including whether Jelly will work out at all this second time around.

Stone is quite aware that the idea seems ridiculous to some folks and that he hasn’t “invented water,” as one critic has said to him. But he also believes there could be space for an alternative to Google. “There’s a huge percentage of queries that are better answered by a person,” he said, adding that technically, even Google results were written by humans because most things on websites were put there by people.

Asked if he thinks Jelly will be as big as Google, he said he doesn’t know. “That would be great,” he added casually, though he didn’t seem to delude himself too much about this.

Jelly also got “lucky,” as Stone says, when it came to the undisclosed amount of funding he has raised after personally getting the company off the ground. Not too long after raising its first round of institutional funding in 2013, Greylock Partners’ Josh Elman approached Stone and asked to participate in his next round, and though Jelly hadn’t even begun to spend its first round of venture capital money, Stone accepted.

“I grew up on welfare and was in debt until I was 37, so I took the money,” Stone laughed, adding that “in retrospect, it looked like I was a genius.”