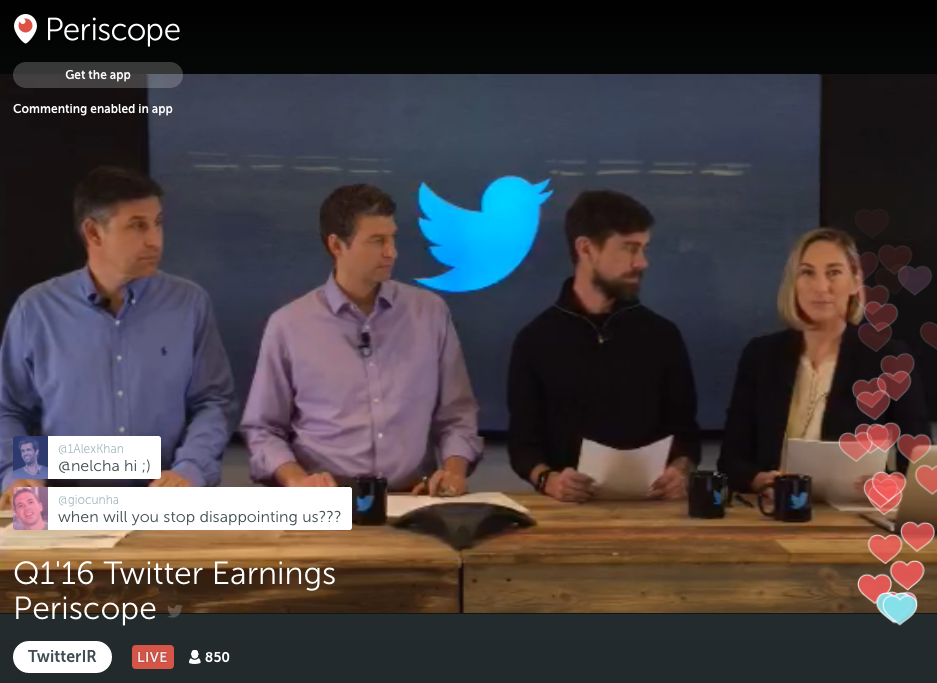 Business journalists sit through lots of earnings calls, and they’re not always riveting. (I describe them to my friends as “a series of accounting concerts.”)

But Twitter’s (TWTR) quarterly reports have become a lot more interesting to watch since Jack Dorsey returned as CEO and began broadcasting the calls on Periscope, Twitter’s livestreaming app.

Throughout the call, eager Periscope users send fluttering hearts and chime in with commentary.

Sometimes they have helpful advice: “[Twitter] would substantially increase their users if they better publicized that they allow nudity,” user @Richtheskeptic suggested in October. Sometimes they offer investment advice: “ALWAYS SHORT TWTR” someone wrote Tuesday. Other times they are not mad, just disappointed: “When will you stop disappointing us???” user Giocunta asked Tuesday.

The peanut gallery provides some light entertainment between the talk of “macroeconomic headwinds,” CPC’s and MAU’s. Twitter execs even answer questions posed by Periscope users. The most commonly asked questions on Periscope unsurprisingly concern Periscope.

Namely, when and how will Twitter make money on Periscope?

Chief operating officer Adam Bain noted that Twitter is already making money on Periscope and its other video subsidiary, Vine, where brands promote their live Periscope broadcasts via Twitter. Here’s his answer (lightly edited for clarity and brevity):

We actually are monetizing Periscope and Vine by bringing that creative canvas into Twitter and allowing marketers to do targeting campaigns and measurement.

This plays into Twitter’s big video push. Throughout the call, Bain referred to Twitter’s Promoted Tweets and Promoted Trends ad products as “legacy” formats, while noting that video ads are the future. The entire media world has contracted a case of video fever in recent months, in part because video ads cost more, are more effective, and look more like the ad format that brands spend the most money on: 30-second T.V. spots. Twitter is no exception.

Bain noted that Twitter is signing big video ad deals with the largest ad holding companies. Twitter faces serious livestreaming competition from Facebook (FB), but Facebook is not yet monetizing its live video content. (In fact, it is doing the opposite, paying media organizations to make the videos.) Twitter is smart to lock in that spending, especially as it relates to Periscope, now.