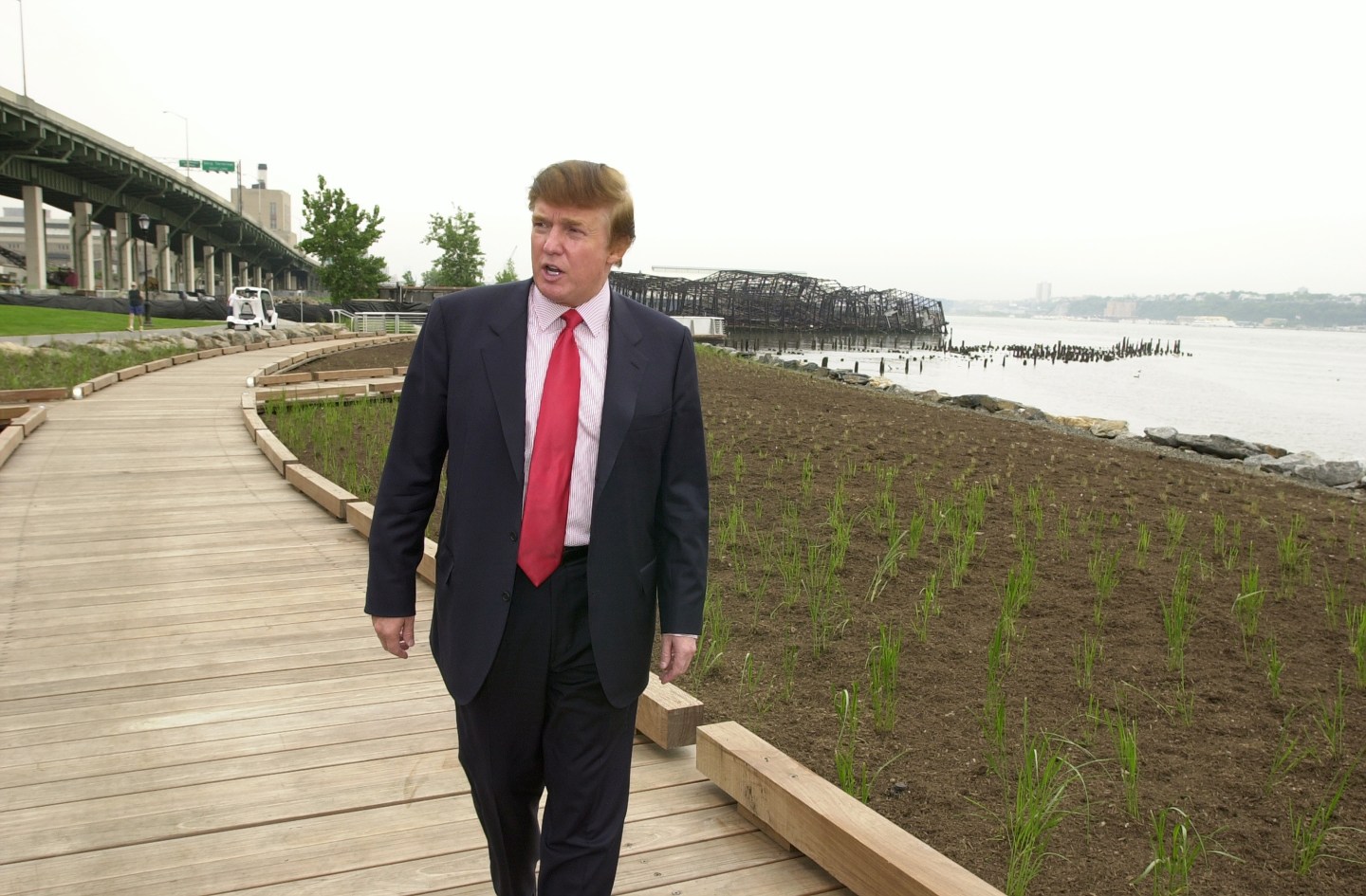 As Donald Trump reveled in a five-state primary sweep last night, he sounded a familiar note about his business prowess. “I know about dealing with China,” he said in his victory remarks. “I’ve made billions of dollars dealing with China.”

This statement may actually be true—but the story behind a key transaction with Hong Kong investors, which turns out to be the most lucrative of Trump’s career, is dramatically different than you might expect. The celebrity tycoon so despised what he called a “very bad and destructive” transaction that he sued his Chinese partners to block it. He hurled accusations of kickbacks, tax fraud, and a nefarious plot to shortchange him by hundreds of millions of dollars. But all of Trump’s loudest bluster and legal muscle couldn’t prevent the 2005 sale of a swath of land along Manhattan’s Hudson River. Trump’s best transaction turned out to be one in which the self-described master dealmaker had no power, got dragged along screaming—and then benefitted hugely.

Put simply, Trump got really, really lucky by parlaying the sale of what was variously called Trump Place and Riverside South––it’s now known as the latter—into a big share in two of America’s premier office buildings, 1290 Avenue of the Americas in Manhattan, and the fabled former Bank of America complex at 555 California Street in San Francisco. Those landmark properties contain a combined 3.8 million square feet of offices, more than 1 World Trade Center, fully leased at top rates to the likes of AXA and Goldman Sachs (GS). They form the core of Trump’s office holdings, the largest portion of his net worth, estimated by Fortune at around $3.5 billion, far less than the $10 billion Trump claims, but still highly impressive. (“Fortune has no idea what my assets are or the value of those assets,” Trump said in an interview for Fortune’s in-depth assessment of his career, Business the Trump Way, in which he was also presented with questions relating to the transaction examined in this article)

On a minimal cash investment Trump has reaped almost $800 million in additional equity, net rent, and tax-free re-financings from the properties he initially didn’t want to own. Those gains make 1290 and 555 even more lucrative than what’s probably Trump’s second best deal, the purchase of 40 Wall Street at an ultra-distressed price in 1995.

Trump’s history as owner, partner, then unwilling seller of Riverside South is more than a tale of incredible good fortune. Trump accomplished remarkable things to keep his claws in the project in tough times, and oversee construction on the buildings that showcased its potential. It also illustrates all of the factors that lifted him from near bankruptcy in the early 1990s to becoming richer than ever: brilliant salesmanship, the grit to surmount debt burdens that would sink almost anyone else, and skill in the unglamorous field of building and managing properties. The weaknesses are also apparent, especially resistance to selling anything with his name on it, even at fantastic prices.

In 1985, Trump purchased the former Penn Central site, 77 acres across the West Side Highway from the Hudson River running from 72nd to 59th Streets. The price was approximately $115 million, all of it borrowed. His plan called for the largest development in New York history, an 18-million-square-foot city-within-a-city boasting the world’s tallest building. Billed as Television City, it was conceived as a media mecca anchored by the headquarters for TV network NBC. Over the next few years, community opposition forced Trump to greatly shrink the development’s scope.

Early on, it looked like a financial bloodbath. By the early 1990s, Trump had defaulted on $310 million in loans on the project, along with another $2.5 billion in personally-guaranteed borrowings. In 1994, Chase Manhattan bank announced its intention to take the property in foreclosure. Through a remarkable display of brinksmanship, Trump managed to settle with the lenders and keep a major share in the project for himself. In early 1994, a group of investors from Hong Kong arrived in Manhattan to negotiate the purchase of another Trump property, the Plaza Hotel, also deeply in debt. Barbara Corcoran, founder of brokerage firm the Corcoran Group, says she was present when Trump first met with the Hong Kong group over breakfast at the Plaza. She vividly recalls how his magnetic salesmanship got them hooked on a property they’d never heard of. “Donald spends one minute talking about the Plaza,” recalls Corcoran, ”then spends the next 90 minutes trying to sell them Riverside South, even though they’d come to buy the Plaza. He was saying, ‘I have world’s greatest piece of land!’”

A former Trump executive recalls that at another meeting with the Hong Kong group, the bankers who’d loaned Trump $400 million in the Plaza were present. Naturally, they were hoping that Trump, the master salesman, would persuade the visitors to buy the hotel, and pay back at least part of their loan in the process. “Donald starts talking about Riverside South, which the bankers hadn’t loaned on, and they’re just staring in amazement,” says the executive. “It was classic Donald versus the lenders. He just kept rolling, and they were too polite to interrupt.”

Trump’s pitch was so flamboyantly irresistible, says Corcoran, that the group quickly forgot about the Plaza, and decided to buy Riverside South instead.

Continuing his charm offensive, Trump sold the Hong Kong consortium on keeping him as a 30% partner in Riverside South, extolling the power of the Trump name, and his expertise at supervising construction and managing apartment towers planned for the site. The Chinese agreed, and their partnership, Hudson Waterfront, purchased the $310 million mortgage on the property for $88 million, with Trump contributing around $4 million in cash. The deal came with an important proviso. Because he sorely needed a bailout, Trump agreed to a limited partnership interest that blocked him from participating in major decisions on the future course of the project, including a sale.

Despite those restrictions, Trump’s development skills, and his name, played a big role in making the project a success. Between 1997 and 2004, he oversaw the construction of three rental buildings and four condominium towers on the site, all branded Trump Place, a name emblazoned on their facades to this day. The approximately 2,500 apartments were less than half of the units approved for Riverside South, so the project, and the spread of Trump’s logo along the West Side waterfront, potentially had years to run.

At $1.76 billion, Extell and Carlyle were paying top dollar in an already excellent market. Three other developers, the Related Companies, the Durst Organization, and Vornado Realty Trust (VNO), also made offers, all below Extell’s. The transaction had a second leg: The Hong Kong investors planned to deploy the proceeds to purchase 555 California Street and 1290 Avenue of the Americas in a tax-sheltered transaction known as a 1031 exchange.

As conceived, the deal would transfer Trump’s partnership stake into a 30% share of the two office towers, worth around $342 million in equity. Trump sued to block the deal, charging that the proposed transaction amounted to a “very bad fire sale” done at the “lowest bid.” Trump asserted that the price was between $1 billion and $1.5 billion below what competing buyers were willing to pay, though none materialized to beat Extell’s offer. Trump assailed his partners for ignoring his “incomparable and superior market knowledge,” and accused the Hong Kong group of taking a $17.5 million kickback from Extell and Carlyle in exchange for selling at a sweetheart price, as well as illegally transferring partnership funds to themselves, without paying Trump his share. (None of these accusations went anywhere in court.)

Nevertheless, Trump was powerless to block the sale. After the partnership purchased the two buildings in December of 2005, Trump kept pressing his lawsuits, demanding several hundred million dollars in damages. Then, in early 2007, the Hong Kong group made a second lucrative deal: Vornado, the giant REIT, agreed to purchase their 70% share at a price that valued 555 and 1290 at a total of almost $2.6 billion, a couple of hundred million dollars more than the partnership had paid just over a year before.

Vornado’s CEO, Steven Roth, tried to buy Trump’s stake, but Trump turned him down. In his letter to shareholders in Vornado’s 2006 annual report, Roth stated that he’d offered the tycoon at “a substantial sum, which we think is a full and fair price, but he does not yet think so.”

Instead, Trump––who’s barred by the partnership agreement from selling to an outside investor until 2044––chose to remain as Vornado’s partner, keeping his 30% equity share. “I love Steve Roth!” declared Trump in 2007. “He’s a great friend!” Even so, Trump didn’t make it any easier for his “great friend” to clinch the deal. He refused to drop his suit against his former partners. To get the deal done, Roth took the highly unusual step of indemnifying Trump’s ex-partners against any damages from Trump’s suit.

Why was Roth was willing to shoulder that risk? He concluded from firsthand experience that Trump wasn’t shortchanged at all. As he stated in the 2006 letter to shareholders, “We were involved two years ago in the sales process, and in fact, may have been the under-bidder. We are convinced that the price paid for the land was then market or even a pinch better.”

The Trump suits were dismissed, and the deal he initially hated has proven incredibly profitable. As far as Fortune can discern, Trump’s only cash investment in Riverside South is the $4 million participation in the purchase of the mortgage. Today, the two buildings, exceptionally well managed by Vornado, are worth, measured against comparable sales, around $3.1 billion. Trump has received around $156 million in cash from re-financings, and pocketed rental income, after all expenses, approaching $20 million a year, for a total of about $340 million. In addition, his equity position, after subtracting $1.56 billion in mortgage debt, stands at about $450 million. Hence, Trump has made approximately $800 million from his tiny investment in Riverside South.

The beauty of the Riverside South story is that the partners shrewdly exploited a hot market to reap a big price, exiting before the financial crisis struck. They then moved their profits into trophy buildings that weathered the turmoil well. In the recovery, Manhattan and San Francisco have been two of the best venues for office space on the planet, sending the value of 555 and 1290 still higher.

It’s impossible to say what would have happened if Trump had succeeded in nixing the deal with Extell and Carlyle. As Roth suggested, it’s highly unlikely he’d have gotten a better price, and delaying might have forced the partners to market the property during the big downturn that followed. So Trump succeeded in spite of himself. Still, keep in mind that when Chase was about to seize Riverside South, and leave Trump with zilch, the Donald found a way to keep a big stake in what he knew would become one of Manhattan’s great developments, and a huge financial winner.

Trying to kill a great sale hardly makes the bombastic mogul look like the mythical dealmaker he claims to be. Then again, in the Art of Survival, no one can beat Donald Trump.