25 Years After Anita Hill, Have We Made Progress On Sexual Harassment? 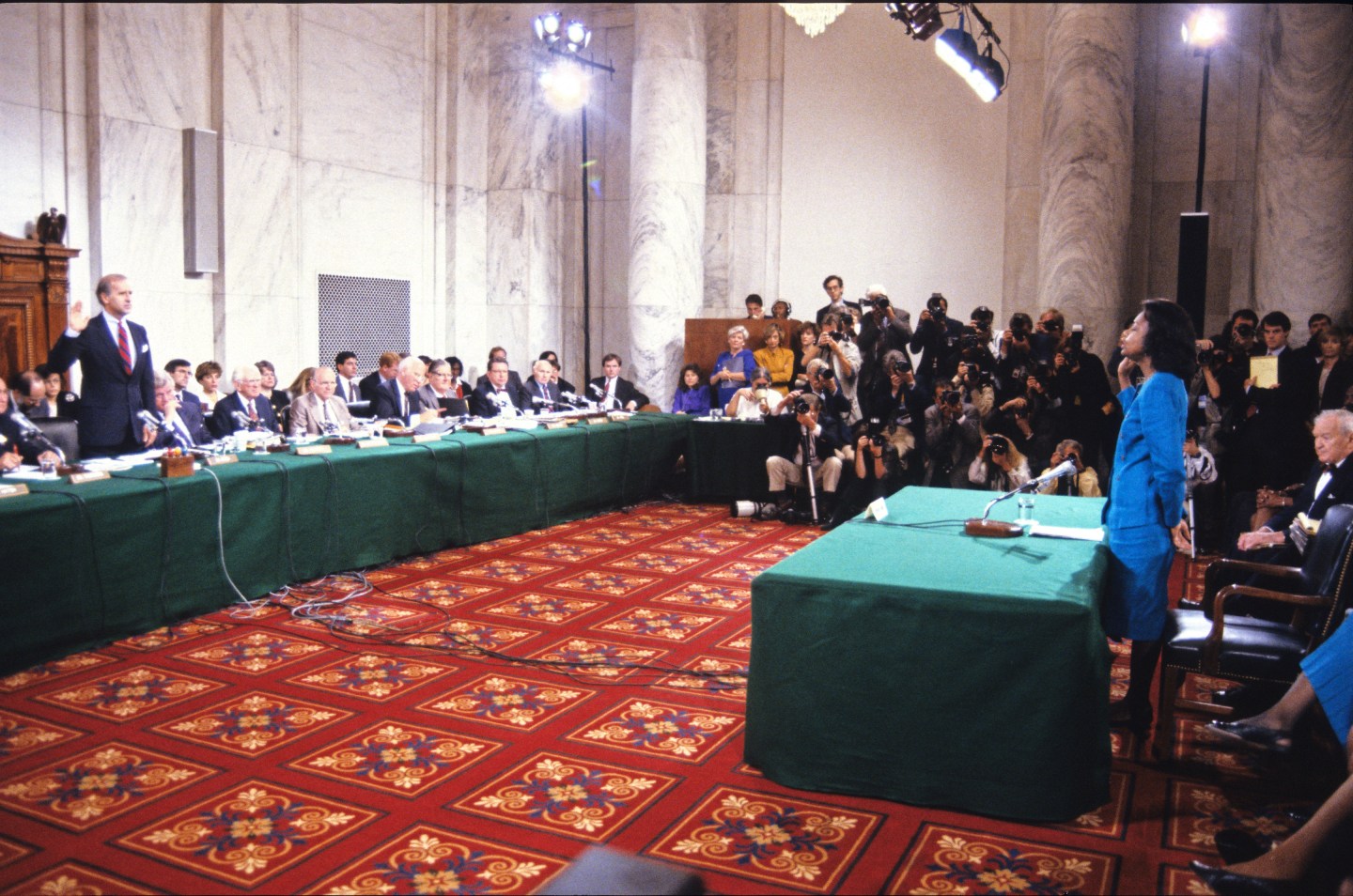 Professor Anita F. Hill, right, is sworn-in to testify before the United States Senate Judiciary Committee on the confirmation of Judge Clarence Thomas to be Associate Justice of the US Supreme Court by Chairman Joseph Biden (Democrat of Delaware) in Washington, DC on October 11, 1991. Credit: Arnie Sachs / CNP - NO WIRE SERVICE - Photo by: Arnie Sachs/picture-alliance/dpa/AP Images
Arnie Sachs — picture-alliance/dpa/AP

Don’t call it a comeback: Sexual harassment, that age-old workplace issue, is once again making headlines thanks to Confirmation, a new HBO movie that revisits Anita Hill’s testimony at the 1991 hearings of Supreme Court nominee Clarence Thomas.

It’s fitting that the film has touched off a fresh conversation on the subject, given the role that the original hearings played in bringing sexual harassment into the American public consciousness. At the time, many people had never really considered the issue—or if they had, they thought of it as necessarily involving assault, rather than the unwanted advances, constant badgering, and lewd conversation that Hill described.

Hill’s testimony, which conjured a shockingly hostile workplace—who can look at a Coke can the same way?—opened the public’s eyes to what goes on behind office doors, infuriating and emboldening many women. Her words are credited for driving more women into public office and unleashing a surge of sexual harassment complaints.

But that was 25 years ago. The question now: What’s the current state of workplace harassment, and what progress have we made over the past quarter century?

To find out, Fortune spoke to the current head of the U.S. Equal Employment Opportunity Commission, Jenny Yang. There’s more than a touch of irony here, given that Thomas was Hill’s boss at that very organization while he was allegedly harassing her. Nevertheless, the EEOC is tasked with enforcing federal laws that make it illegal for an employer to discriminate against job applicants or employees—a domaine that includes sexual harassment.

Yang, who was appointed by President Obama in 2014, is the first Asian American to led the organization. A lawyer by training, she was previously a partner at Cohen Milstein Sellers & Toll, where she represented employees in civil rights and employment actions, and earlier, a senior trial attorney with the U.S. Department of Justice.

The following interview has been condensed and edited for clarity.

Fortune: How much of the EEOC’s work involves charges of sexual harassment?

Yang: Harassment claims in general, including sexual harassment, account for about 30% of the claims that we receive. Race is actually the most frequent basis of harassment charges and sex-based harassment is the second most frequent. Last year we had over 6,800 charges alleging sex-based harassment. That can include unwelcome advances or it can include gender-based harassment, which might be comments that are demeaning to a particular gender. About 17% of our charges are filed by men, so it’s not an issue that only faces women. We also have increasingly seen same-sex harassment cases. [In the case of EEOC v. Boh Bros. Constr. Co. LLC], a supervisor sexually harassed a subordinate because he thought this male subordinate was feminine and didn’t conform the the gender stereotype of a rough iron worker.

What percentage of those charges do you end up pursuing?

In fiscal year 2015, 6,822 sexual harassment charges were filed with us. We resolved 1,829 charges for a total of $46 million. That same year we filed 20 lawsuits involving sexual harassment. The numbers are fairly steady [from year to year]. [Editor’s Note: According to the EEOC’s stats, which go back to 2010, the number of claims has been gradually decreasing from a 2010 high of 7,944.]

There are many more cases that are brought by individuals through the court room or through arbitration. Our numbers are just one piece of the overall picture.

What trends do you see in the types of harassment that are occurring?

The majority of cases do still involve women, filling charges of sex-based harassment in a variety of industries. Many of our cases have involved the restaurant industry and particularly young women. For example, we had a case against Burger King and [franchisee] Carrols Corporation that involved 89 women, including many teenagers. We have seen some very egregious cases in low-wage industries, particularly farm working and agricultural industries, as well as janitorial industries. Particularly where women may be in isolated work environments and there’s a real severe power imbalance.

We have also seen sexual harassment in white collar fields, including finance. We resolved a case against JP Morgan Chase in 2014 on behalf of female mortgage bankers based in Columbus, Ohio. We alleged that they were subjected to sex-based harassment and denied lucrative sales opportunities and that their employer ostracized women who declined to participate in a sexually-charged work environment. We resolved that case for $1,450,000 for 16 women.

One of the really transformative cases in our work was Mitsubishi Motors, back in 1998. It involved a real environment of systemic discrimination. We resolved that case for $34 million—at the time, it was largest-ever resolution of an sexual harassment case. It really raised awareness of the problem of environmental sexual harassment and the ways in which employers can allow that to occur.

Are there certain types of cases where the EEOC is particularly likely to get involved?

We consider a number of factors, including the seriousness of the violation, what legal issues are raised in the case, and the wider impact the lawsuit could have on our efforts to combat workplace discrimination. We think the charges that are filed with us are just the tip of the iceberg because so many women are afraid to come forward. There have been studies that say that about 25% of women say they’ve experienced harassment at work, but among that percentage, 70% said they never reported it. We have seen in many of our cases that people experience retaliation for coming forward. Because that’s a significant issue for many workers, that’s an issue where the EEOC has gotten involved.

What the biggest misconceptions about sexual harassment?

People primarily think of sexual harassment involving sexual advances, but while that certainly continues, it also can include lewd or demeaning comments that can create a hostile environment. I also think people don’t recognize that it can affect men as well. People often don’t realize that harassment doesn’t have to perpetrated by a supervisor or even by a co-worker. It can also be the result of a customer or a third-party supplier or others whom an employee has to interact with. We had a case against Fred Meyer, which is a grocery chain. A male customer was harassing female employees daily. The employees reported it, but the employer really didn’t take action.

Where are today’s employers most likely to bungle attempts to prevent harassment?

What we’re seeing is that sometimes employers aren’t really communicating their policies. One issue can involve temporary workers. You know there’s an increasing number of temporary workers now. [The EEOC worked with one temporary worker who was] harassed by a supervisor and then fired by the staffing agency for complaining about it, according to our allegations. She explained that she wasn’t trained about what to do. Employers may not recognize that even when you have employers working for you on a temporary basis, it’s important that they be aware of your policies. At this company, 80% of workers were temporary, but only full-time workers were given the employee handbooks.

What about big, high-profile cases, like the Clarence Thomas hearings or, more recently, Ellen Pao’s gender discrimination lawsuit against her former employer, Kleiner Perkins? Do you think that those types of cases have an impact on how we think about harassment and discrimination?

I do. I think those types of cases, which get a lot of pubic attention, do encourage more people to talk about the issue. They encourage more employers to look at their policies and think about whether they are doing enough to prevent harassment. We saw after the Mitsubishi case, we got international attention from media all over the world—that helps to lift up the focus.

Right now, an issue that getting increasing attention in the media is sexual harassment based on orientation or transgender status. That’s an area where employers are taking another look at their policies. We did file recently our first two private sector cases charging harassment around sexual orientation and we have filed a case on the denial of bathroom to a transgender individual—the denial of bathroom use is often an issue of harassment.

What should you do if you’re being sexually harassed at work?

It is very important to explain to the harasser that behavior is bothering you and to stop. Make sure that is very clear. It can also be helpful to keep a journal of what’s happening to you—when the harassment occurred, how, were there witnesses, who perpetrated it, so that the timing and the substance is very clear. It’s also important for employees to look at their employers anti-harassment policy and to report the harassment according to that policy. We also encourage people to contact the EEOC promptly to learn more about their rights and to file a charge.