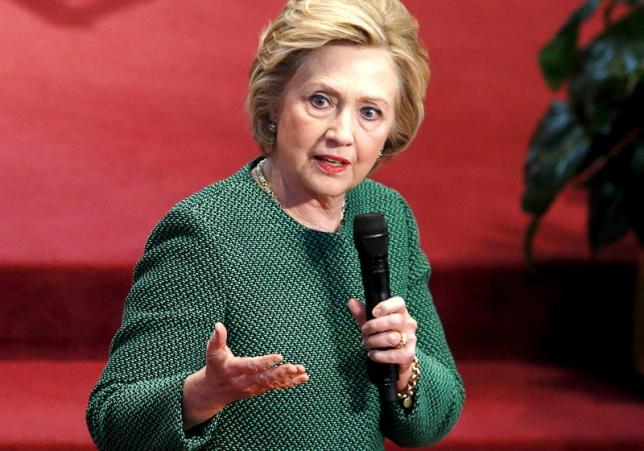 As in other states, Bernie Sanders is winning younger voters in New York decisively. But Hillary Clinton’s millennial supporters in the Big Apple aren’t willing to concede the fight yet.

Take Edward Delman, a 25-year-old writer and volunteer, who on a recent Monday was wearing black-rimmed glasses and a T-shirt that said “Yas Queen”—a reference to the comedy show Broad City—above a drawing of Clinton. He organized a Millennials for Hillary event at a Brooklyn bar specifically to fight the “narrative that the kids are for Bernie.”

Like other younger Clinton supporters, Delman says he’s troubled by the views of some of his Sanders-supporting peers, who he says are obsessed with “ideological purity.”

“There’s a culture that’s developed where we are assigning moral values to political positions,” he said. “I think they see it as ‘if you haven’t had a spotless record, if you’ve ever changed your mind on anything, you must be tainted.’”

The former Secretary of State is leading Sanders among all voters 55% to 41% in the New York primary, but among voters under the age of 45, Sanders is leading by 62% to 37%, according to a recent NBC News/Wall Street Journal/Marist poll.

Among the 120 Clinton supporters at Delman’s event at Union Hall in Park Slope, many said that the Democratic primary is particularly lopsided online, where they are often afraid to voice their thoughts. Some said they’d even started a private Facebook group so they could talk openly about their support for Clinton.

“For a young twentysomething who is liberal, there’s a social pressure to uphold that ideological purity,” says Thomas Lawler, a 22-year old recent college grad who works in child care and the arts. “We don’t post articles about Hillary. There’s more social capital to be gained by posting something positive about Bernie.”

But Lawler says that even if his Facebook doesn’t reflect it, he’s for Hillary all the way. “I would rather have a politician for president than an ideologue,” he says. “I don’t see Hillary as a compromise candidate. I am fully behind her.”

For Lawler’s friend Casey Zuckerman, Bernie Sanders’ single-issue campaign is a major turn-off. She thinks that her friends who back Sanders are making the perfect the enemy of the good. “You’re allowed to get away with being impractical if you’re voting on your morals,” she says. “But isn’t it more moral to actually win and get something close to a progressive agenda, rather than nothing?”

Both Zuckerman and Lawler are recent Vassar grads, and they think the college atmosphere is partly the reason for Sanders’ strength among younger voters. “When you live in a bubble on a college campus, it gives you the luxury of having ideologically pure positions,” Zuckerman says. “White men can afford to be like, ‘Bernie or Bust,’” Lawler adds.

For Jonathan Katz, 24, support for Sanders seems more like a “nostalgia for a past that never quite existed.” The son of South African immigrants, Katz says he sees much higher support for Sanders among people without immigrant parents. He also says that his friends who support Sanders try to “straight-splain” Clinton to him, as if they can’t believe a gay man would willingly support Clinton, given her evolution on gay marriage. He says the secret Facebook group he uses to talk about Hillary with his fellow supporters is “disproportionately queer.”

“Straight men who are into Bernie, they’re super-masculine bros,” said Katz, who is sporting an impressively bushy beard, even by Brooklyn standards. “It’s hard for us to relate to that.”

Clinton supporters say the focus on purity is unfair to Clinton, who represented New York in the U.S. Senate, a position that all-but requires a close relationship with Wall Street. “Bernie Sanders is the Senator from Vermont, what industry could he possibly be connected to?” Delman said. “Ben & Jerrys? Maple syrup?”

Still, the social pressure is so strong, that even die-hard supporters like Zuckerman feel tempted to fake the Bern. “What if I voted for Bernie just to say that I did it, then voted for Hillary in the general?” she said. “But no, I believe in Hillary.”

Besides, she adds, “this is our time to lay low… we’re playing the long game.”