This Is the Biggest Myth About the Gender Wage Gap 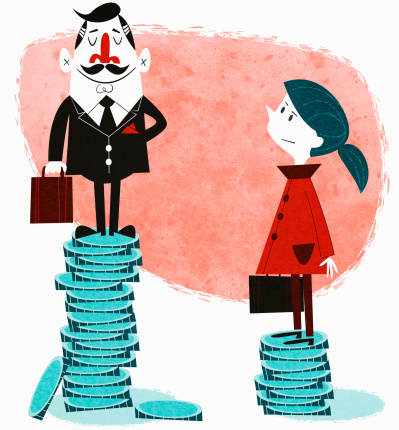 There are a surprising number of people who still believe that the gender pay gap – the difference between men and womens’ pay in the workplace – is not real. According to a recent Glassdoor survey, 7 in 10 employed adults in seven countries (United States, Canada, United Kingdom, France, Germany, The Netherlands and Switzerland) believe men and women are paid equally for equal work at their employer. How is this possible when the data clearly show that women are paid about 76% to 80% of what men are paid in a given year?

I’ll tell you why: Because anyone familiar with data knows that number doesn’t make sense. It doesn’t pass the sniff test, and doesn’t square with what most managers and executives see around their halls every day. Many leaders believe there is a pay gap, but they also believe it’s explainable, mainly due to the career choices women make, such as taking breaks to have children or choosing a career that offers more flexibility. But here’s the thing: While the 76%-80% gender pay gap figure might not tell the whole story, the truth certainly is not that the pay gap is all explainable. And, just because some parts of the gap are explainable doesn’t mean they are fair or justified.

Factoring differences in education, experience, age, location, job title, industry and even company, our latest research reveals that the “adjusted” gender pay gap in the U.S. amounts to women earning about 94.6 cents per dollar compared to men. It is remarkable that a significant gap persists even after comparing male-female worker pay at the job title and company level. This smaller, yet still substantial pay gap is largely bias – whether intended or unintended – and it can’t be explained by the data. This is extremely costly to women. At today’s real median earnings for full-time working women of $39,621, that is a pay loss of $2,140 per year or more than $64,100 over a 30-year career.

See also: Here Are 5 of the Most Infuriating Facts About the Wage Gap

The single biggest reason for the divergence of men and women’s pay is what careers they go into, or what economists call “occupational sorting.” While this may help explain the bulk of the pay gap, it’s unjustifiable because for decades, young girls have been pushed in subtle and not-so-subtle ways away from higher paying technical jobs and careers. In fact, this occupational sorting explains 54% of the overall or “unadjusted” pay gap in the U.S. — by far the largest factor. For example, U.S. Census figures show women make up only 26% of highly paid chief executives but 71% of low-paid cashiers. By contrast, differences in education and experience between men and women explain only a small part of the pay gap.

Many organizations, such as Code.org and MakeItWork.org are beginning to tackle this problem to increase opportunity for everyone, but it is ever so slowly changing. I have never met a C-level executive or manager who says that women shouldn’t be paid fairly for equal work when education, experience, skills, performance, etc. are taken into account. The problem is that they assume that’s already happening today. They are wrong.

So – it’s time we stop talking about equal pay and do something about it. It’s morally right, and it’s a smart business decision. There is ample evidence to suggest that companies that don’t give women a fair shake only end up hurting themselves financially. A study of gender diversity on firms in Standard & Poor’s composite 1,500 list revealed that, on average, female representation in top management leads to an increase of $42 million in firm value. It also concluded that companies that prioritized innovation saw greater financial gains when women were part of the top leadership ranks.

And, our workforce is expecting change and action. A recent Harris poll found that 93% of employed American adults believe men and women should be paid equally. In the U.S., more than two-thirds (67%) of U.S. employees are not likely to apply for a job at a company where they believe a pay gap exists between men and women doing similar work. Companies looking for unique and highly skilled talent must vigorously compete to hire them. Company reputation and employer branding is key. Workers – especially millennials and generation Z – have made it clear they want to work for enlightened employers that are purpose-driven, value diversity, and pay fairly.

I am optimistic we may finally be at a tipping point for gender pay equality. If your company has already taken steps to ensure pay equity, you should leverage that fact as part of your employer brand to stand out to candidates and employees. If you don’t know where you stand, it’s time to take a closer look. Take a lesson from Salesforce and Gap who have pro-actively inspected their pay inequalities and revisited how they were compensating men and women. Don’t wait for regulations, laws and/or investor activists to force you into taking action. When it comes to gender pay fairness, executives will ultimately define the winners and losers. Where you and your company land is up to you.

Robert Hohman is CEO of Glassdoor.