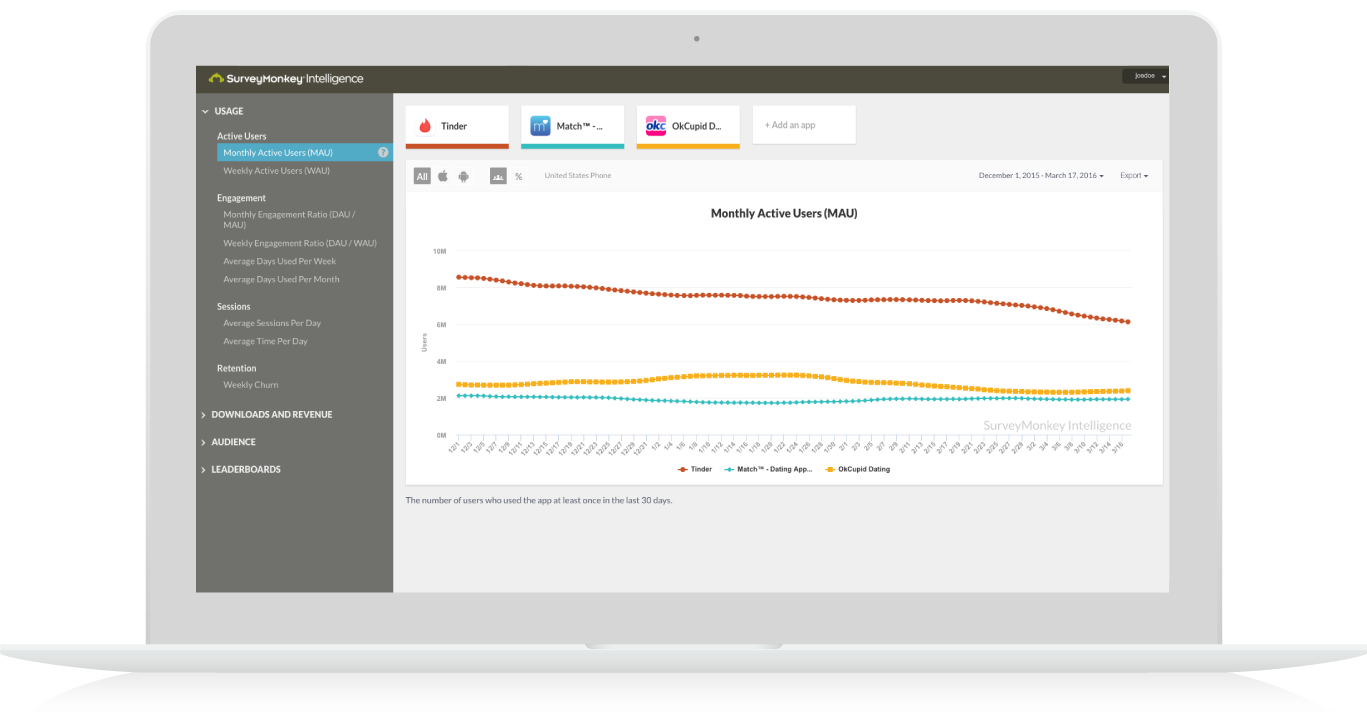 The offering, called SurveyMonkey Intelligence, collects an array of metrics such as usage, retention data, leaderboards, and audience demographics. The idea is for users to be able to compare their own results with aggregated insights for nearly any mobile app you could name—along with those of which you might never have heard. That includes ones that big companies such as Starbucks and United use to reach their most loyal customers.

“They way customers are interacting with your business is increasingly via the mobile platform,” says SurveyMonkey CEO Zander Lurie. “Just as we revolutionized how people ask questions and get feedback 17 years ago, we’re making it far easier to collect and consider mobile app data.”

Lurie, a former GoPro executive, joined SurveyMonkey in January. He was named chief executive after the abrupt departure of Bill Veghte, who replaced Goldberg after his sudden death last year but spent only six months at the post.

What are peak usage times for your company’s mobile app? How do usage retention rates compare with competitive offerings? Which new titles have similar audience demographics, make them good potential marketing partners? Which app store categories are growing most quickly? Those are the sorts of questions that SurveyMonkey seeks to answer, Lurie suggests.

The new SurveyMonkey service builds on technology that the company picked up last summer when it quietly bought Renzu, a mobile insights startup founded by several alumni of mobile games giant Zynga. It gathers data by tracking a panel of mobile apps users who have opted into the service—sort of like the system that comScore uses, for example, to collect information for digital marketers.

SurveyMonkey Intelligence is a separate service from the company’s main one. The freemium version allows someone to track basic download and usage metrics. Access to more comprehensive data requires one of the paid plans, which start at $79 per month.

SurveyMonkey, which has a private valuation of approximately $2 billion, is also fine-tuning its business strategy. It laid off about 100 people in early March, approximately 13% of its workforce. Lurie told tech news site Re/code that the company should generate $200 million in revenue for 2016.