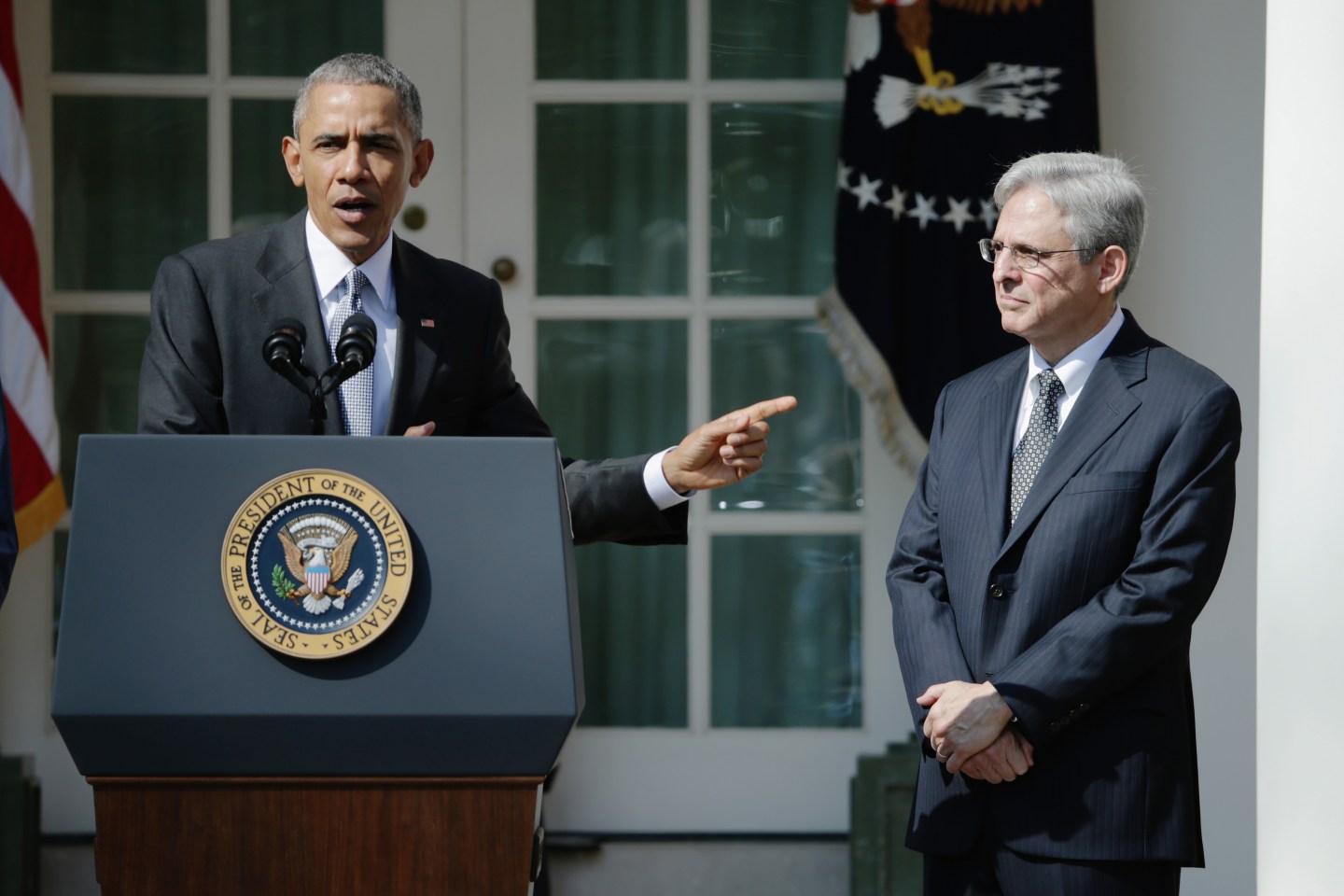 WASHINGTON, DC - MARCH 16: U.S. President Barack Obama (L) stands with Judge Merrick B. Garland, while nominating him to the US Supreme Court, in the Rose Garden at the White House, March 16, 2016 in Washington, DC. Garland currently serves as the chief judge on the United States Court of Appeals for the District of Columbia Circuit, and if confirmed by the US Senate, would replace Antonin Scalia who died suddenly last month. (Photo by Chip Somodevilla/Getty Images)
Photograph by Chip Somodevilla—Getty Images

Make no mistake: President Obama thinks the Senate should confirm his Supreme Court nominee, Merrick Garland. He thinks Senate Republicans are derelict in their constitutional duty for not holding hearings or even voting on his nomination. And he’s going to pressure them about it.

But that doesn’t mean he’s going to get worked up.

In keeping with a low-key style that he’s shown in a number of contentious political fights during his presidency, Obama is barnstorming without creating too much of a storm, making his case against the opposition in a calm and measured way.

In the three weeks since Obama announced his pick to replace the late Antonin Scalia on the nation’s highest court, his Administration has ushered Garland to Capitol Hill to meet with Senate Democrats. White House spokesman Josh Earnest has repeatedly made the case that Garland deserves a hearing in daily press briefings. Vice President Joe Biden has spoken at Georgetown Law School.

On Thursday, Obama will try once more at the University of Chicago Law School, where he once taught constitutional law.

Earnest has said President Obama is looking to make the legal case on why the Senate should move forward with the nomination process. Stalling, the president is set to argue, will jeopardize public confidence in the judicial system.

“If it gets overly politicized and starts to break down on party lines, that’s going to undermine the public confidence in the notion that when it comes to interpreting the law and the rule of law, that politics should be set aside,” Earnest said Tuesday. “And so you will hear the President talk a little bit more about this, and I think it’s an important argument for the American people to hear.”

The fact is, though, the majority of Americans already agree with that sentiment. Before the president announced his nominee, who is considered a consensus candidate for the position, polls suggested that most Americans wanted the Senate to give Obama’s pick a fair hearing. More recent polling shows that 64% of Americans say the Senate should at least hold hearings. And a little over half say Garland should be confirmed.

Republicans in the Senate, however, are a different story.

A sprinkling of Republicans have or plan to meet with Garland for what the White House has called “courtesy visits.” Sen. Susan Collins of Maine who met with Garland on Tuesday, said the meeting left her more convinced that the Senate should get moving and called for hearings. Five additional Republicans, including Senate Judiciary Committee Chairman Chuck Grassley, have also agreed this week to meet with Garland.

But Senate GOP leadership is holding strong. Just two hours after Garland’s meeting with Sen. Collins, a moderate Republican, Senate Majority Leader Mitch McConnell told reporters, “it’s safe to say there will not be hearings or votes.” On a grassroots level, organizations like the Judicial Crisis Network are pouring money into ads to urge Senators to let the next president pick the nominee. The JCN spent about $4 million in the past month.

Earnest said that the Republicans’ plan of blockading the nomination entirely will be unsustainable in the long run, especially in an election year.

“When your best explanation is I’m not going to do my job because the Republican leader in the Senate told me not to, I don’t think that there are many Republican voters, let alone Democrats and independents, who are going to find that an acceptable explanation,” Earnest said. “I think that is why we’re going to continue to see the pressure on Republicans continue to ramp up.”

One of the most vulnerable Republican senators this year happens to represent Obama’s home state, where his speech Thursday will take place. Feeling the heat of a tough re-election campaign, Kirk met with Garland and urged his colleagues to do the same, called for a vote on his nomination and even said he’d consider voting for him.

If Garland gets a hearing, it’ll be because of political pressure like that.