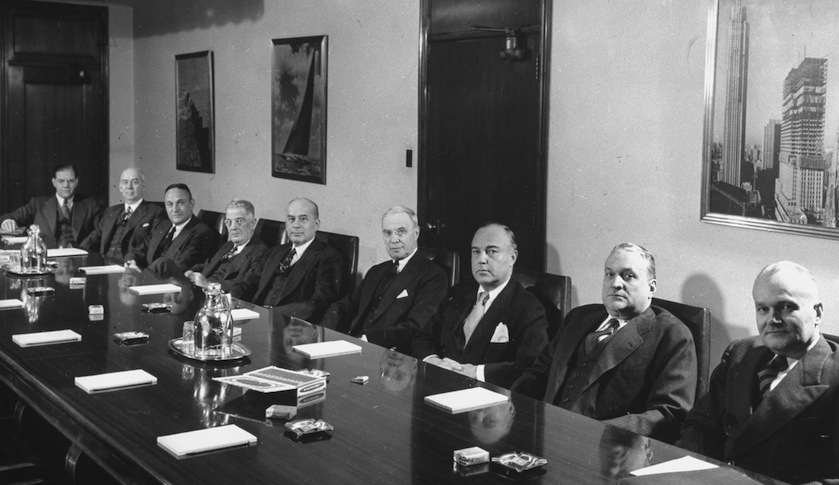 When Fortune looked at the number of Fortune 500 companies with entirely male boards in early 2015, it was disappointing to discover that the number was in the double-digits: 23. But returning to the question this year, we were optimistic that we’d see some notable improvement. Sadly, that’s not the case.

According to data March 11 data from S&P Global Market Intelligence, 24 Fortune 500 companies currently have no women on their boards. That’s right—one more than last year.

Of the 23 companies we identified last year, 18 remain on the list. Three—Chesapeake Energy Corporation, Fidelity National Financial, Inc., Precision Castparts—have added a female board member—and two fell off the Fortune 500.

Three of the new companies landing on this year’s list are newcomers to the Fortune 500, and three previously had a female board member who has since retired, transferred, or left the company.

“One can certainly understand there could be extenuating circumstances for some companies, but for those who have been in the spotlight by being in the Fortune 500 list before, they certainly should have responded to the enormous amount of public concern about women’s equality and getting women on corporate boards,” said Heidi Hartmann, the president of the Washington-based Institute for Women’s Policy Research think tank. “I would have expected them to have responded.”

Things look slightly better when you focus on the overall percentage of Fortune 500 board seats occupied by women: 21%, vs. 19.6% in 2015. The percentage of companies with just one female board member is down, now 22% vs. 28% last year.

“There’s still a long way to go before women are represented equitably in these top companies,” said Hartmann. “The research shows that when there’s women in leadership positions they’re more friendly to policies that help women, more friendly to promoting women and hiring women.”

Indeed, a 2015 study by McKinsey and Co. found that companies in the top quartile of gender diversity are 15% more likely to financial outperform those in the bottom quartile, and a 2014 Catalyst study found that having more women in leadership and board positions resulted in better financial performance while increasing innovation and group performance.

Fortune reached out to those Fortune 500 companies that still list no female directors. Below, we’ve published comments from all the companies that responded. If not comment is listed, the company either chose not to comment or never responded to our requests:

CHS sent the following statement to Fortune: “Because CHS is a farmer-owned cooperative, its 17 board members are directly elected by the company’s farmer-owners through a democratic process that begins at the grassroots level, much like elections for public office. The process is quite different from that of typical investor-owned companies, which may recruit and select directors with specific skill sets or other characteristics. In agricultural cooperatives, a director must be a member and have local level cooperative leadership experience, ensuring that the perspectives of customer-owners are reflected in the boardroom. Achieving greater board diversity—including gender, age and agricultural experience—is a high priority for the CHS Board and company leadership and is considered critical to the company’s future growth and success”

CSC’s sole female board member, Nancy Killefer, was transferred to the company’s federal government spinoff, CSRA, when that separation was finalized in November of 2015.

“CSC is committed to diversity in its recruiting practices,” wrote a CSC spokesperson in a statement prepared for Fortune. “In selecting board members, CSC has emphasized relevant experience, strong values, diversity, and independent thinking. Our current board reflects these characteristics and we will remain committed to them in future board selections.”

According to a statement sent to Fortune, “The Land O’Lakes, Inc. Board of Directors is elected in a democratic election process by the 4,400 members of Land O’Lakes, a food and agricultural cooperative. Women have been elected to the board in the past and served a number of years. The board has also benefitted from the counsel of women who served as previous advisory board members, and the organization has a group of elected leaders from which future board members typically come. In addition, four of 10 board members for the Land O’Lakes Foundation Board for 2016 are female, through appointment by our CEO. And in November, we promoted our most senior female executive Beth Ford to Group EVP and COO, where she has overall responsibility for the Purina Animal Nutrition and U.S. Dairy Foods businesses and accountability for all supply chain, operations, IT and R&D functions across the Land O’Lakes enterprise.”

“We are a private, employee-owned company. We do not publicly discuss our leadership structure.”

Western Refining Inc.’s sole female board member, Carin Barth, retired on January 1, 2016, and she is yet to be replaced.

“She was an original board member, chairman of our audit committee, and an active member of the board since the day we went public in January of 2006. That’s been a part of our culture and part of our history, and I anticipate it will be similar going forward,” said Gary Hanson, a spokesperson for Western Refining Inc.