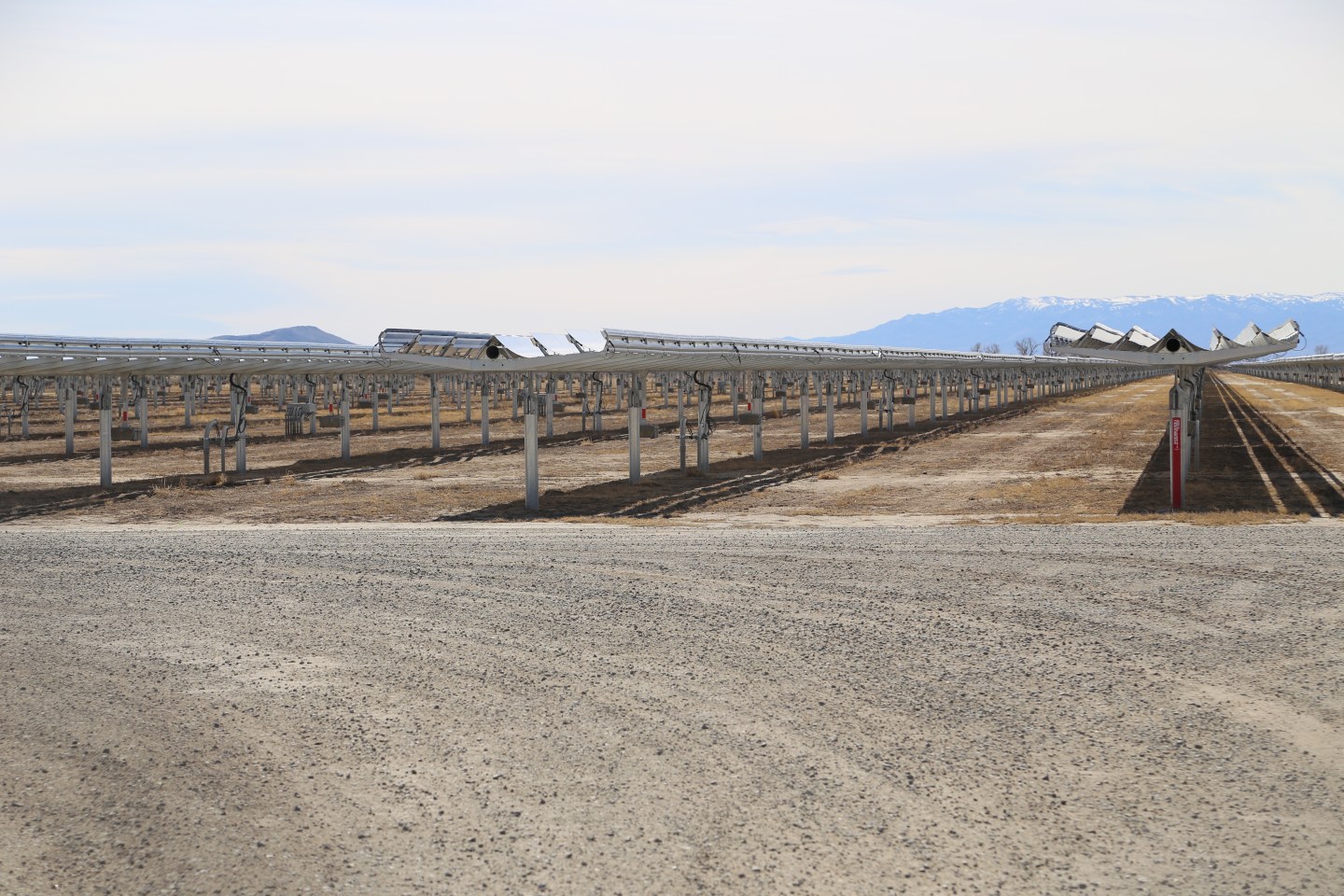 Shiny mirrors and solar cells in a barren plain in Nevada, about an hour and a half from the aging casinos of downtown Reno, flash brighter than a room crammed with slot machines. They’re helping power a vast and expanding data center nearby owned by Apple that would otherwise depend on fossil fuel for electricity.

The world’s biggest tech company decided to build the facility in this sun soaked state partly to tap into the region’s abundant natural clean energy. It’s an example of Apple’s ambitious pledge to eventually power all of its operations—data centers, retail outlets, and offices—with renewable energy.

On Monday, Lisa Jackson, Apple’s VP of environment, policy, and social initiatives, announced that 93% of the company’s worldwide facilities rely entirely on electricity generated by the sun, wind, and water. And it’s because of projects like this one —that sits just off of a highway dubbed the Loneliest Road in America, past tumbleweeds and intermittent ghost towns—that Apple is so close.

But the Nevada solar farm also illustrates how Apple’s clean energy plans have evolved over the years as the cost of solar has declined and as power companies and utilities have created programs for corporate customers to tap into. At the same time, Apple has gradually gained a better understanding of the most efficient ways to buy clean energy and build the plants that generate it.

In the future, Apple plans to buy significantly more solar energy in Nevada from a new project that will provide more than double the clean energy that this solar facility does. Construction will likely soon start outside of Las Vegas.

The extra power will help keep up with the increasing demand for electricity at Apple’s data center. The facility’s power consumption is expected to grow 45% from 2017 to 2019, according to filings by Apple with the Nevada Public Utility Commission.

The contrasts between the two Nevada sites highlights how Apple’s solar projects, and big solar in Nevada overall, have progressed. Solar has gone from being a costly fringe source of electricity, which was driven by environmental motivations, to a cost-effective mainstream power source.

Much of the industry’s growth has come from huge solar panel farms built in the California and Nevada deserts. Large power companies, and increasingly businesses like Apple, have staked claims in these regions that are abundant with cheap open space and blue skies.

But solar wasn’t always such a given, particularly when Apple first started out on its solar quest years ago. In many regions the local power companies and utilities didn’t originally recognize that companies like Apple would be willing to pay a premium for solar. Solar technology itself, including the price of the panels, was also far more expensive.

I first visited the project, called Fort Churchill, in late 2014, more than a year after Apple announced plans to build it. At the time, it was still being tested and constructed.

Apple first approached NV Energy, which is owned by Warren Buffett’s Berkshire Hathaway, in 2012 about how to buy clean energy after deciding to build a data center in the Reno area, according to filings with Nevada’s Public Utilities Commission. The two companies decided to use this stretch of unused land owned by NV Energy, next to a large natural gas power plant, near a small city called Yerington.

As part of its original deal with NV Energy, Apple said it would work with solar developer SunPower (SPWR) to build the solar farm. But Apple would own the project and would lease it to NV Energy over a period of 20 years.

That’s a somewhat unusual arrangement in the utility world that meant that Apple was taking on some potential risk in going through with the project. More often a company like Apple would want to just be the end customer and buy power from NV Energy or SunPower.

But at the time of the deal in 2012, Apple was in search of clean energy for its data center rather than a customer being wooed. Power companies like NV Energy weren’t particularly familiar with a company like Apple, which isn’t in the energy business, being so insistent on solar power.

But the deal for Fort Churchill, which started producing power a few months ago, is similar to how Apple built solar projects near its data center in North Carolina over the past few years. These were the company’s first big data center solar projects and were, at the time, the largest privately-owned solar farms in the U.S.

In contrast, for Apple’s solar project outside of Las Vegas—called Boulder City II— SunPower plans to build, own, and operate the solar farm. It is doing a more traditional power purchase agreement with NV Energy in which Apple is the ultimate customer. Such a deal can be more efficient for Apple because it is freed from having to manage the development itself.

There’s also a contrast in size and technology between Apple’s Nevada solar sites. Apple’s solar project near Reno generates 18 megawatts, providing the equivalent power of close to 3,000 homes, on a relatively small 137 acres.

To generate that power, Apple is using a funky sort of hybrid solar technology from SunPower that is able to produce extra power on a compact plot of land. That site uses both mirrors to concentrate sunlight and solar cells to convert the concentrated sunlight into electricity. Usually sites use either mirrors or panels, but the project outside of Reno uses both.

For more about the economics behind clean energy, watch:

Most companies don’t use this type of solar hybrid mirror and cell technology because it tends to be more expensive than relying entirely on solar panels. But companies that only have limited space can use this setup because it provides more power in a compact area.

During Lisa Jackson’s short clean energy presentation at Apple’s event on Monday, she showed off a slide of the SunPower hybrid solar tech installed in China with yaks grazing under and around the solar arrays. In that way, the solar site outside of Reno could have been a test bed for larger installations in China.

The costs of Apple’s Fort Churchill solar farm are confidential. But SunPower CEO Tom Werner tells Fortune that the “economics work” for the site.

In contrast, SunPower’s BoulderCity II site is using just solar panels, which is the most popular and cheapest form of solar available. The project is expected to generate 50 megawatts, which is more than double the northern site and is enough to power 8,000 average U.S. homes.

Apple’s Fort Churchill solar project in the north is also one of the first in the state to take advantage of Nevada’s clean energy-friendly “Green Energy Rider Program.” Companies like Apple voluntarily pay the extra cost associated with developing and buying clean energy, like a solar or wind farm, so that other power customers can avoid higher electricity bills.

It might seem strange that before the Green Rider Program, Nevada’s regulated energy sector wouldn’t easily let rich customers like Apple pay more to buy whatever kind of power they wanted. But such is the ways of the often slow-moving electricity industry and state regulatory bodies.

Nevada approved the Green Rider program in late 2013, a year after Apple started looking to build its first clean energy project in the state. And Apple managed to be the program’s first customer.

The lessons learned by Apple from its smaller northern Nevada solar project and now the larger one to the south will undoubtedly help it decide how to go forward with future solar projects. Early last year, Apple announced plans to spend $848 million to buy solar power from a huge 130 megawatt solar panel project under construction by solar developer First Solar (FSLR) in Monterey County, in central California.

That project’s large size—almost three times the size of Apple’s one near Las Vegas and seven times the size of Fort Churchill—as well the traditional power purchase structure means that it’s likely a very good deal for Apple. Apple also plans to more than double the size of that contract to 280 megawatts in another 15 years or so.

The company just can’t get enough of solar.

Analyst Sam Jaffe estimated that Apple agreed to pay around 8.2 cents per kilowatt hour in its California deal. Jaffe predicted that the agreement would look like “an extreme bargain” in the 2030’s when electricity rates will be significantly higher because of inflation.

But to get to this type of hot solar deal today, it took Apple and the solar industry years to evolve and learn. And in that way Apple played a significant role in helping the commercial solar industry transform into a more mainstream industry. Booming industries need big deep-pocketed customers, and Apple has been a prime one for the solar sector.

SunPower’s Werner said that five years ago companies like Apple were buying solar power to make an environmental statement but today, after years of innovation in the solar industry, lower costs and less risks, it’s about economics. “They found out the stuff works. Today solar is snowballing.” As for Apple, Werner says the company has pushed SunPower to be more innovative.

Apple has also helped utilities and state power commissions realize that progressive large companies want to buy solar power and are willing to do so when it costs more and when it’s cheaper. The company did that in both Nevada and North Carolina.

In both of those respects Apple has been a true solar pioneer. And now the company is positioned to benefit from the solid economics of the solar boom.