How Media Giants Are Profiting from Donald Trump’s Ascent 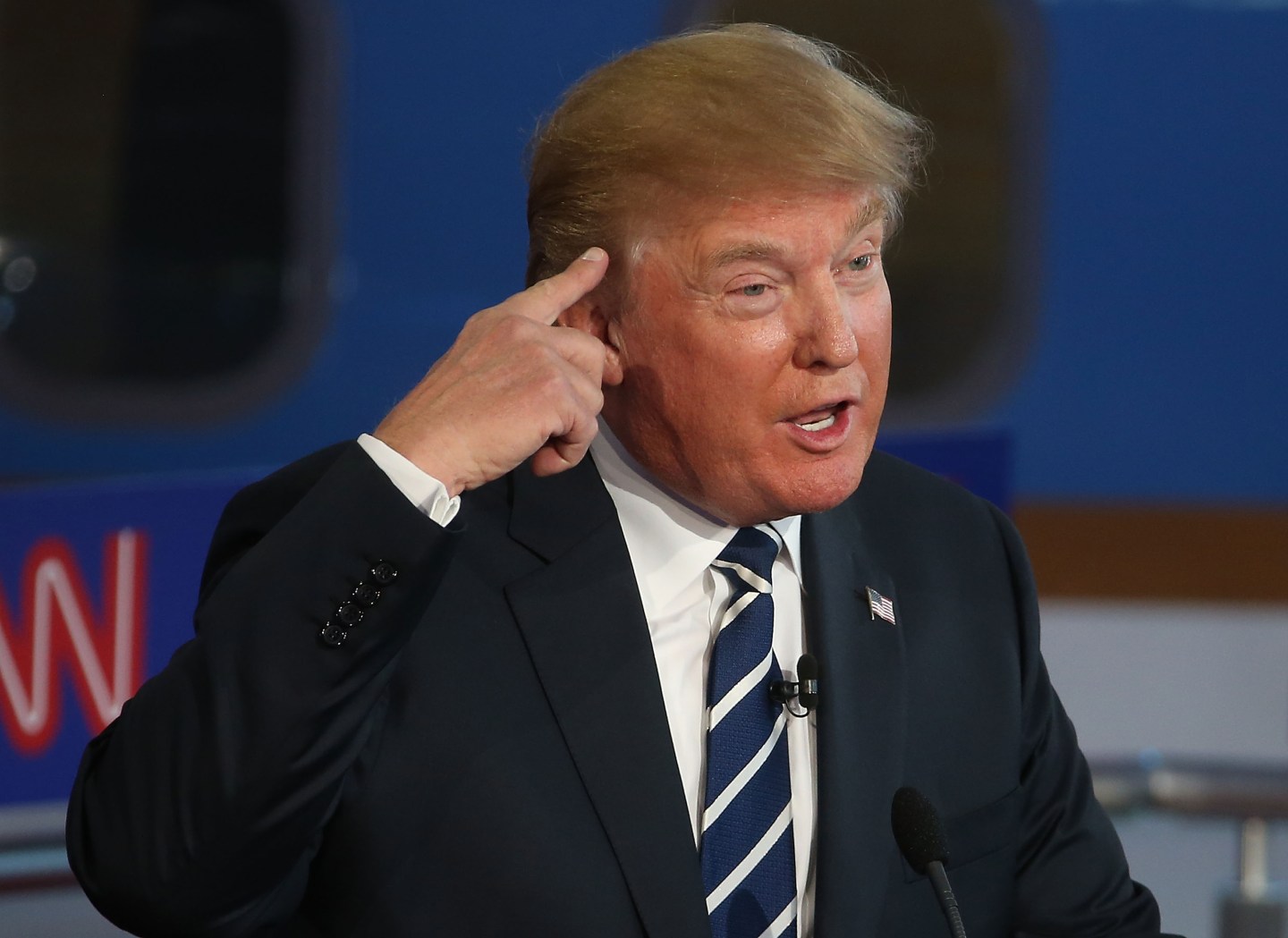 There has been much debate over the media’s relationship with Donald Trump. But, there is little doubt that the bombastic and controversial GOP frontrunner has dominated the airwaves throughout the 2016 election cycle—and television networks have reaped huge ratings boosts as a result.

Last week, CNN president Jeff Zucker said that the news media is not the culprit for Trump’s ascent and that networks like his own are simply doing their job in covering a leading presidential candidate. According to media analyst Andrew Tyndall, Trump was the second most-covered story of 2015, after “winter weather,” and the amount of coverage afforded to Trump in the 2016 election cycle accounts for nearly a third of all election coverage and more than all Democratic candidates combined.

Meanwhile, tonight in Washington, D.C., CNN hosts what could be described as one of the biggest ratings grabs in recent election-season memory. While previous debates and town halls have focused on one political party at a time, the network is hosting a three-hour special featuring live individual interviews with all five remaining candidates in both parties.

For TV networks, the “Trump effect” has meant higher television ratings for all election coverage in general and, in particular, a higher profile and record ratings for the 21 debates held so far by the two parties. Ratings for some of those debates have been so high—with, in some cases, more than four times as many viewers tuning in as did for debates during the 2012 election—that networks have been able to hike their advertising rates well into six-digit territory for a 30-second ad.

CNN, for example, was reportedly able to charge roughly 40 times its typical primetime rate of $5,000 for a 30-second ad spot during its September debate.

A boon for TV comedians

Also, as tends to be the case with any presidential race, the current election cycle is providing a wealth of material to television’s late-night comedians, who have relished the opportunity to mock Trump and his rivals on a nightly basis. HBO’s John Oliver has seen particular success online, where clips from his show Last Week Tonight have gone viral (especially two recent Trump-focused segments), with the comedian reportedly enjoying a larger online following than broadcast network late-night hosts. The latter typically see higher Nielsen ratings on TV.

Meanwhile, TBS’ Samantha Bee (a relative newcomer with her late-night show, Full Frontal, debuting in February) has also deployed her share of buzzy, political segments to post a strong ratings challenge to the rest of the late-night TV field.

Whether the media has fueled Trump’s political ascent, or if the constant coverage is merely a byproduct of the public’s fascination with him and TV networks are simply giving us what we want, coverage of the Trump campaign, and of the election in general, has bolstered TV ratings for the major broadcast and cable networks.

Here’s a look at the networks benefitting the most from election season:

Fox News: Fox News Channel has had to navigate perhaps the most tumultuous relationship with GOP frontrunner Donald Trump of any major network at a time when Trump’s love-hate relationship with the media is a major talking point of the election. Trump’s clashes with Fox News anchor and debate moderator Megyn Kelly (over Trump’s claims that she asked him unfair questions) led him to skip the second of the network’s three debates, in January. He also announced this week that he’d skip a final Fox News debate planned for next week that the network then cancelled after rival John Kasich also said he would not attend.

But, the conflict between Trump and the 21st Century Fox (FOX) subsidiary has also helped hand the network the highest debate ratings of the current election cycle, so far. Fox News is enjoying a network-record eight-week winning streak atop the weekly cable network ratings for full-day viewership. In terms of primetime ratings, the network has been either first or second in the weekly ratings race every week of 2016, with CNN most recently presenting the biggest challenge by winning the primetime race twice in the past three weeks.

Fox News set a record for televised political debates last August, when more than 24 million people tuned in for the first debate of the season. As a result, the Wall Street Journal reported that 30 second ad spots for the network’s second debate sold for as much as $260,000 (though ads sold after Trump backed out went for slightly lower but still sold at a premium for debates). The network’s three GOP debates averaged nearly 18 million viewers each, while the Fox News Democratic town hall this month drew only about 2.6 million viewers, as that party’s events have failed to drum up as much excitement with viewers.

To put the network’s huge ratings for GOP debates into perspective, the most-watched primary debate during the 2012 election drew less than 8 million viewers.

CNN: Time Warner’s (TWX) CNN scored the second most-watched debate of the current election cycle when it averaged 23 million viewers during the second GOP debate, in September. That was a ratings record for CNN. The Time Warner-owned network charged a reported $200,000 per 30-second ad during its September debate, though CNN has not released an exact total. As Advertising Age noted at the time, a typical primetime ad spot on CNN costs only about $5,000.

CNN has hosted four GOP debates throughout the current election cycle (including the most recent one, last week), drawing an average of 16.5 million viewers across each contest while averaging less than half as many viewers across four Democratic events. While TV ratings for Democratic debates have distantly trailed GOP events, CNN’s live stream of its October Democratic debate set a record for the network by peaking at 980,000 concurrent streams.

Despite Zucker’s objections, CNN was awfully quick to ramp up its Trump coverage, with Zignal Labs finding that the network offered 2,159 reports on Trump in just the first four months of his campaign, which was nearly double the coverage of Jeb Bush, who was the second most-covered candidate by CNN at that time (before later exiting the race).

CBS: If any network can attest to the fact that coverage of the GOP presidential race attracts more viewer eyeballs than the Clinton-Sanders show, it’s CBS (CBS), which logged a whopping 5 million more viewers for its February GOP debate (13.5 million) than for its November Democratic contest. That disparity no doubt fueled controversial comments from network chairman Les Moonves. Trump’s political success, he told reporters last month, “may not be good for America, but it’s damn good for CBS.” Moonves later said his comments were “misconstrued” but he added that he expects CBS to post “a record-breaking year” in terms of ratings and advertising dollars thanks to the election season.

ABC: Walt Disney’s (DIS) ABC News has also hosted one GOP and one Democratic debate, and more than 13.3 million viewers tuned in for the network’s February GOP New Hampshire debate—again, more than 5 million above the ratings posted by the Dems on ABC in December.

ABC pulled in the highest 2012 primary debate audience of any network with 7.6 million viewers for a GOP standoff in December 2011.

CNBC: CNBC hosted the third GOP debate of 2015 and hiked up its ad rates (to a reported $250,000 per 30 second spot) to take advantage of the 20 million-plus viewers pulled in by FNC and CNN for the first two GOP events.

The business-focued network’s ratings for that late-October stand-off fell well short of its predecessors, but the 14 million viewers still topped any of CNBC’s previous audiences despite complaints from the GOP establishment that the network’s moderators were biased in their questioning of the candidates.

Fox Business: Fox’s business-focused network averaged 12.25 million viewers between its first two GOP debates (in November and January), including a network record audience of 13.5 million people for the first debate. Those viewer totals are especially impressive when you consider that, according to Nielsen, Fox Business averaged only a little over 100,000 total viewers per business day in October, the month before the network’s first debate.

Of course, there is still a long way to go before November’s general election, which means TV networks will have plenty of opportunities to capitalize on the ratings behemoth that has been the 2016 election cycle. If Trump does, in fact, win the Republican nomination, then networks should be able to bank on more big ratings when he debates the eventual Democratic nominee—Hillary Clinton, most likely.

Meanwhile, coverage of each party’s convention this summer could provide another ratings bonanza, particularly if drama continues between the Trump and the Republican establishment and leads to a brokered convention. Either way, the public’s resurgent interest in politics (Trump-driven or not) should be music to the ears of television networks after 2012, when fewer people tuned in for the GOP than the Democrats and both conventions saw ratings dip from previous years.