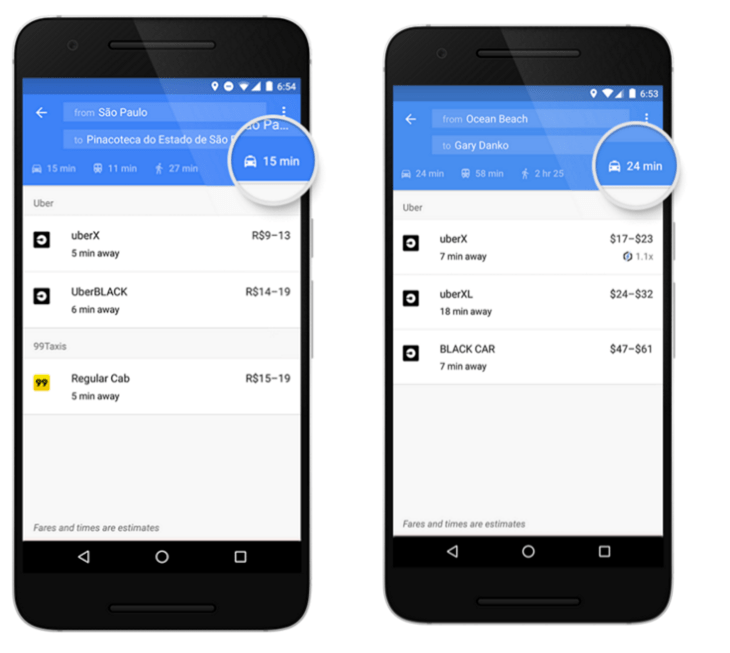 Google has added a way for users of its Map app to compare at ride-sharing fares with industry giant Uber.

Users in certain countries will be able to see which service is cheaper so they can better decide which one to choose. It is an example of the growing amount of transit information available through Google Maps beyond the typical driving directions.

Previously, Google Maps provided ride sharing information under its transit tab only from Uber at the bottom of a list of options that included bus and train routes. But users were out of luck if they wanted to know what competing ride sharing services charged.

Now, when users search for directions in Brazil, they can click on the ride share tab and see fares for both Uber and competitor 99Taxis. Google has added other partners in four other countries including Ola Cabs in India, Hailo in the UK and Spain, mytaxi in Germany and Spain.

Gett in the UK will be included in the new version of Google Maps.

But in North America, Google has made no similar additions. Uber remains the only option while rival Lyft is conspicuously absent. The only new thing U.S. and Canada, and Mexico users will see is a way to compare fares for Uber’s basic service, car pooling, and black car ride.

Google’s venture arm invested $258 million in Uber in 2013. But in the past year, Google has been reportedly working on a ride hailing app that will compete with Uber.

Ride-hailing apps battle it out in China:

Smaller competitors to Google’s navigation app are also vying to become one-stop platforms for how people get around. Xerox, better known for making copies than cars, has developed software designed to make travel in and around Los Angeles, easier, cheaper, and faster.