Samsung and Apple Were Top Targets for Patent Suits in 2015 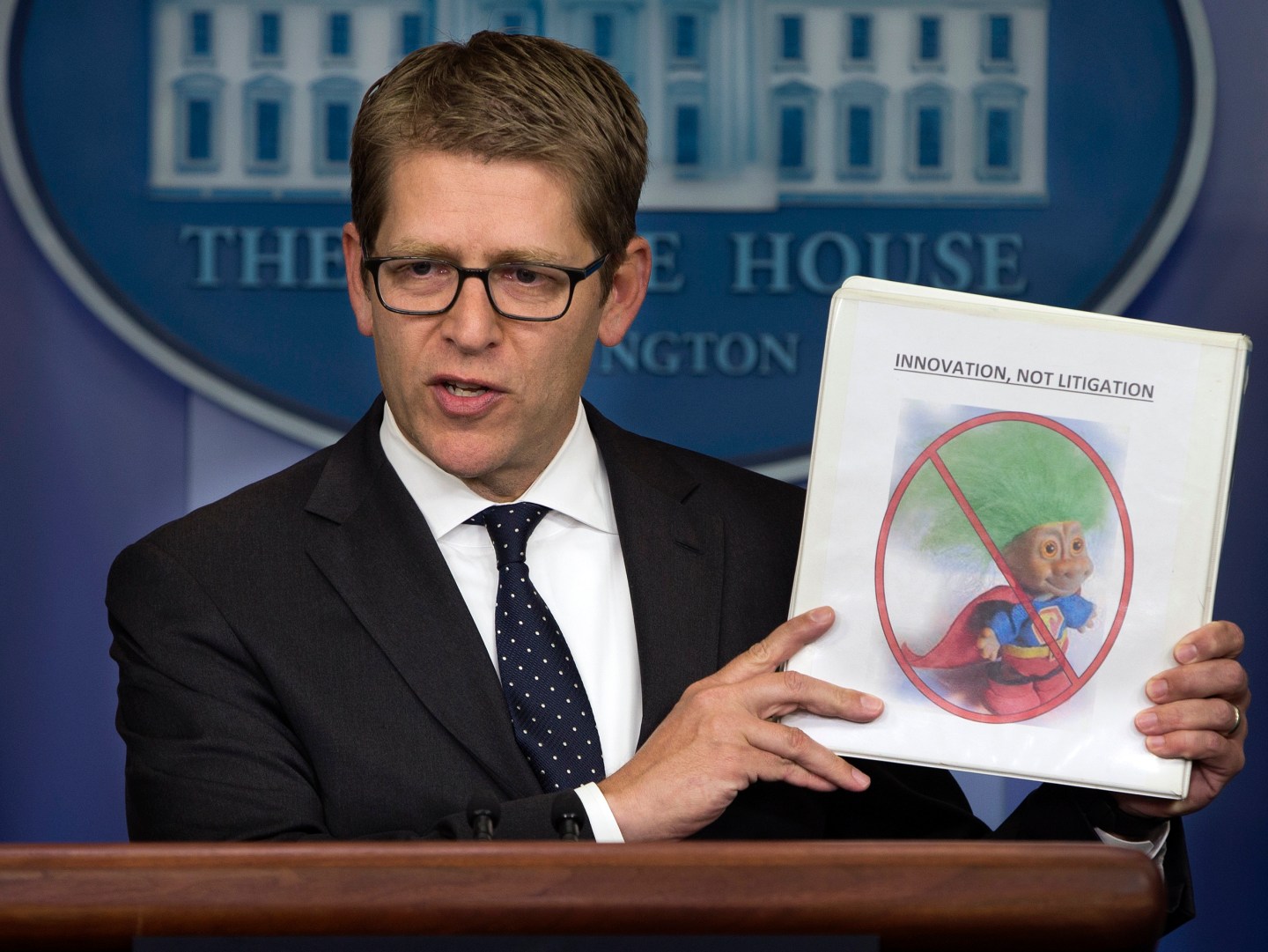 White House press secretary Jay Carney holds up a folder with an image of a troll and the words "innovation, not litigation" during the daily press briefing at the White House in Washington, Tuesday, June 4, 2013. Carney pointed out that the Obama administration is taking action to limit frivolous patent lawsuits, or "patent trolling." (AP Photo/Evan Vucci)
Photograph by Evan Vucci — AP

The country’s two most popular phone makers, Apple (AAPL) and Samsung, are still getting smacked by dozens of lawsuits from so-called “patent trolls,” which are shell companies that make no products.

Meanwhile, a single district in Texas, which the late Justice Antonin Scalia once branded a “renegade jurisdiction,” continues to occupy an outsize role in this ongoing patent pileup.

Those are two of the most notable takeaways that can be found in a new report on U.S. patent trends in 2015. Published by patent analytics firm Lex Machina, the report adds new grist to a debate over U.S. innovation policy at a time when patent reform in Congress has foundered once again.

Here are some of the key findings from the report:

Little of this will come as a surprise to those who have followed the debate over U.S. patent policy in recent years, which has seen Congress propose multiple measures to curb the role of patent trolls, but deliver no new laws since 2011.

For the tech industry, which has endured patent trolls as a tax of sorts for years, the new report does include a few bright spots. Namely, the overall number of lawsuits did not grow significantly from 2014 and tailed off significantly from November to December. That drop-off reflects a change in patent procedure that requires plaintiffs to put forward specific allegations rather than just rely on a generic legal form.

Still, patent trolls remain a major thorn in the side for tech companies, as evidenced by a $625 million verdict a Texas jury awarded against Apple last month.

If you’re curious why the towns of east Texas are so popular for patent lawsuits, the answer appears to be that the local economy relies in part on litigation. As Corporate Counsel explains:

Before the Eastern District became a hub of patent litigation, Marshall, Texas was a center for litigation involving personal injury cases related to chemicals and toxins exposure. But after broad tort reform was enacted limiting damage, it looked as if the legal community would suffer. Some have suggested the Eastern District went out of its way to create an environment that would ensure that litigation there would continue. … Justice Anton Scalia referred to the district as a “renegade” jurisdiction.

In the absence of action in Congress, the tech industry is likely to look to the courts as the best hope for reforms. Currently, an appeals court is considering a case that could change venue rules and significantly limit the role of Texas.