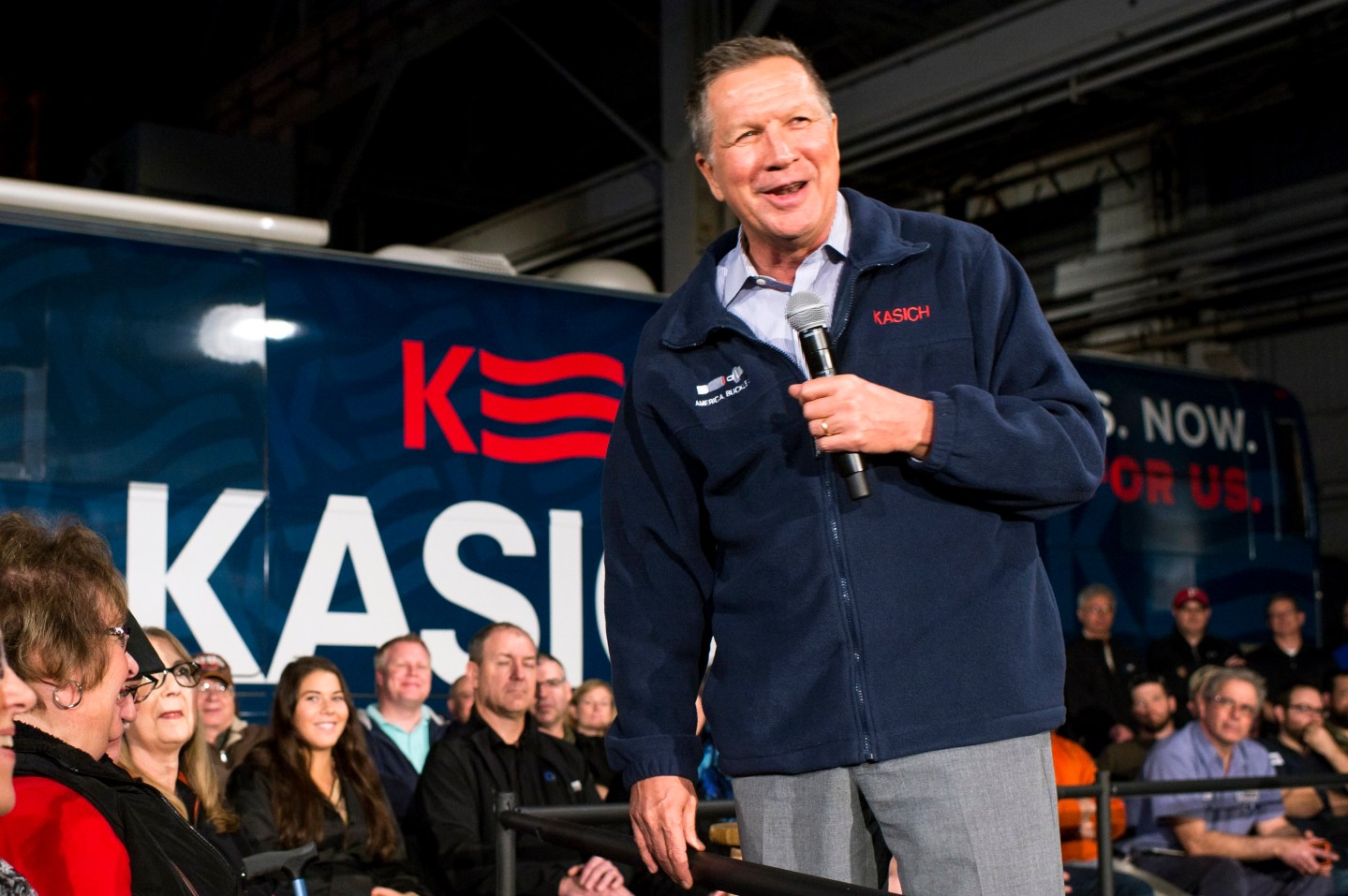 Microphone in hand, Republican John Kasich promised the crowd inside a high-tech Ohio factory Saturday that he’ll never be beholden to Washington insiders if he wins the White House in November.

But as he zigzags across the state before Ohio’s GOP primary on Tuesday—emboldened by polls showing him edging ahead of rival Donald Trump—Kasich may soon need all the Washington insiders he can get.

Behind the scenes, strategists for Kasich, the Ohio governor, are studying arcane party rules that they believe could offer a path to the Republican nomination if he wins his home state, his aides said.

It is a long-shot strategy, both for Kasich and the anti-Trump forces inside the party. But if fellow GOP candidate Marco Rubio loses his own state of Florida on Tuesday—as polls predict—a surge by Kasich may be the only viable strategy for Republicans looking to stop Trump from getting the 1,237 delegates needed to clinch the nomination.

A loss by Rubio, a senator, will almost certainly end his struggling candidacy. If Trump wins both Ohio and Florida, the New York real estate mogul’s march to the nomination will be all but assured.

The Kasich camp sees a Rubio loss in Florida opening up a different possibility—the first contested convention held by either party since 1952.

“The plan is to win Ohio, and some other states, and if that happens, nobody is going to have enough delegates to win the nomination on the first ballot,” said John Weaver, Kasich’s chief campaign strategist, who also worked on Republican Senator John McCain’s losing presidential campaigns in 2000 and 2008.

Kasich supporters are betting that an Ohio win will give his candidacy its first real momentum, attracting donors and endorsements. From there, he could score more victories in upcoming primaries in Pennsylvania, Maryland, Wisconsin, Connecticut, and California, states where Kasich polls favorably.

He has almost no hope of winning enough delegates to secure the nomination outright. But if he can succeed in blocking Trump from getting a majority, Kasich can make a case to convention delegates that he is more electable than Trump or Ted Cruz, the conservative evangelical from Texas and, to date, Trump’s most successful Republican rival.

To become the nominee who faces Hillary Clinton or Bernie Sanders—the two leading Democrat candidates—a Republican needs to win a majority of the 2,472 Republican delegates. Trump is leading, with 460, followed by Cruz with 370, Rubio at 163 and Kasich at 63.

If no candidate reaches that threshold by the close of the last primary on June 7, then the convention will almost certainly be contested—a historical rarity that would signal deep party rifts.

Kasich’s aides are looking to history as a guide, particularly Wendell Willkie’s path to 1940 Republican nomination.

That year, three leading candidates—Robert Taft, Thomas Dewey, and Arthur Vandenberg—each arrived at the convention without enough delegates to win.

Willkie—a businessman and former Democrat who had never before run for public office—opposed the Republican Party’s isolationists and was a supporter of Great Britain’s war efforts. His cause gained momentum after the Nazi blitzkrieg in Europe in May 1940.

At the convention, after six ballots, delegates in Pennsylvania, New York, and Michigan deserted other candidates and switched to Willkie, giving him victory.

Trump, Cruz, and Kasich could face the same scenario this year, which would force to them to lobby delegates on the convention floor until one emerged with a majority.

The Kasich campaign and Republican elites—many of whom have a distaste for both Trump and Cruz—are planning for just such a scenario, Weaver said.

But because it has been more than a half century since the last brokered convention, he said, “Nobody knows exactly how this works.”

An Outsider With Insider Help

Despite 18 years as a Republican congressman, and now six as Ohio governor, Kasich has cast himself as a Washington outsider in hopes of tapping the anti-establishment mood that has fueled Trump’s once-improbable front-runner status.

“Guess what? The establishment is afraid of me because I don’t take orders from anybody over there,” Kasich said in a recent television interview.

At other times, he appears to revel in his Washington experience. “I took on Washington and I won. I actually got the budget balanced when I was a member of the Congress,” he said in a March 11 debate.

“A lot of people who do not want Trump have been sitting back to see how Kasich and Rubio do in their home states on Tuesday,” he said. “If Kasich wins, I think he’ll see a pick-up in donors, and in help from members of the party.”

Ford O’Connell, a Republican strategist not affiliated with any presidential candidate, expects Kasich to face a tough battle even if he wins Ohio.

“But for some of these anti-Trump voters, if they can get Kasich to a contested convention, they see that as their best hope of blocking Trump.”

Until now, the relationship between Kasich and party elites has been prickly.

On Feb. 21, the Rubio campaign had released a memo calling for Kasich to quit the race, while a string of party insiders endorsed Rubio as the “establishment” candidate most likely to defeat Trump.

That’s changing. After the Republican presidential debate in Florida last week, Kasich flew on Friday morning to Lima, Ohio, for an event with voters. As he landed, he and aides switched on their phones and saw emails telling them that Rubio adviser Alex Conant had just publicly urged voters in Ohio who wanted to stop Trump to vote for Kasich instead of Rubio, according to several aides.

“We were not expecting them to do that,” said a Kasich campaign spokesman, Chris Schrimpf.