Why Carl Icahn Is The Donald Trump of Finance 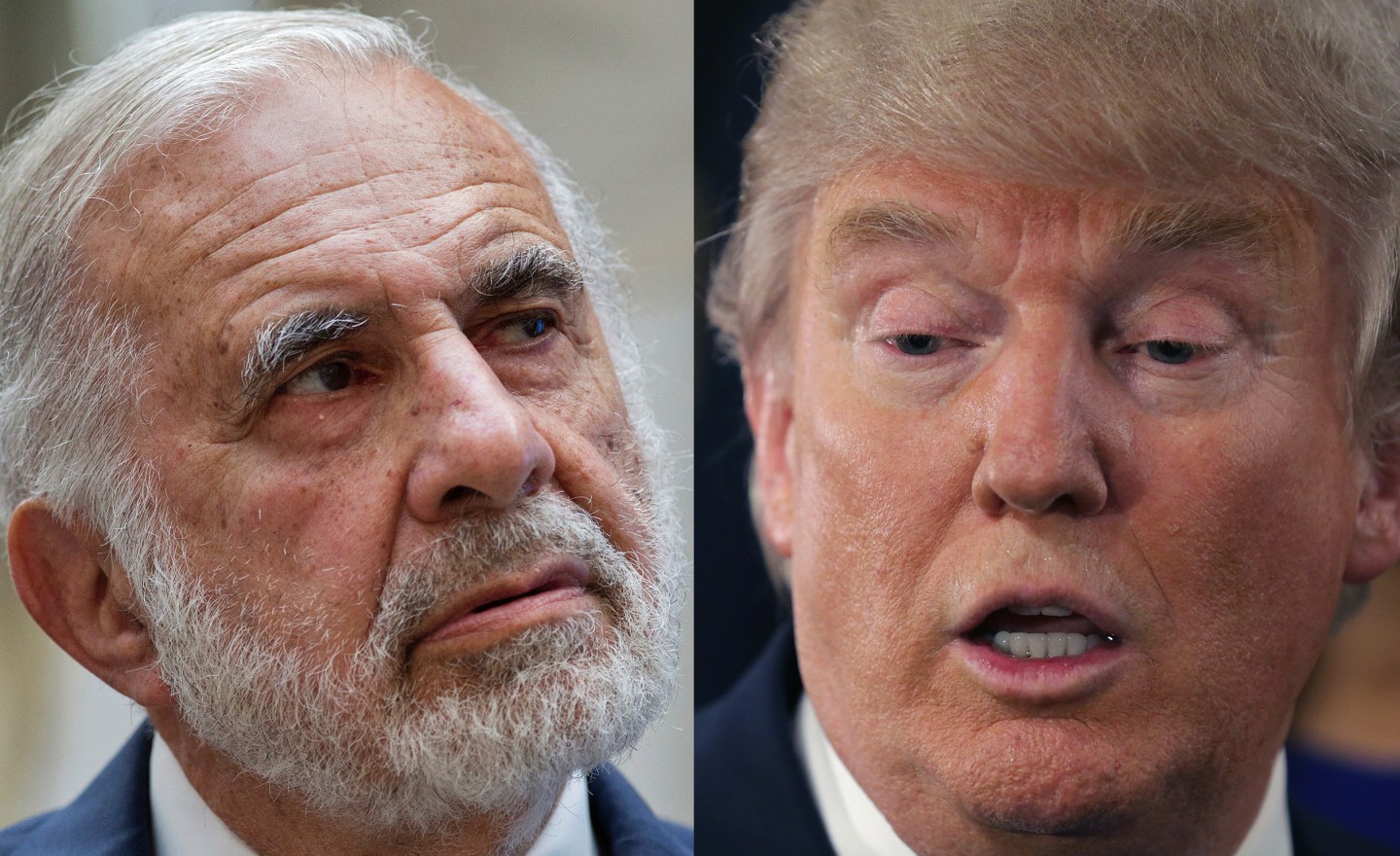 Billionaire investor Carl Icahn is one of the few financial industry supporters of controversial Republican presidential frontrunner Donald Trump. And he has a lot in common with the man he believes is the best person to lead the United States of America.

The two men’s irreverence is refreshing to rabid followers who aren’t bothered by their willingness to use crude language on live TV. And while Icahn has not landed a reality show like Trump’s, he has performed standup at New York comedy club Caroline’s (and does a wicked Texas accent).

But perhaps the most telling thing Icahn has in common with Trump is this: He has no problem declaring that he’s one of the all-time greats, even when his business is getting beaten like a drum. And just as the litany of Trump’s bankruptcies and business failures has not dimmed his appeal to most avid supporters, neither have Icahn’s past two years of dismal investment returns—largely due to concentrated energy bets—fazed his admirers.

As with Trump, hyperbole and a cult of personality surround Icahn. “You’re arguably the best investor we’ve ever met,” “Wall Street Week” host and hedge fund-of-funds manager Anthony Scaramucci gushed last May when the 80-year-old Icahn appeared on the Sunday morning Fox show. A recent series of columns dedicated to Icahn in the New York Observer was titled simply “Icahn Worship.”

In fact, Icahn began substantially elevating his public profile right in the midst of his portfolio’s worst performance since the crash of 2008.

Last September, the corporate raider-cum-shareholder activist turned himself into something of an investment oracle by releasing a 15-minute video titled “Danger Ahead,” warning about a coming financial apocalypse. The video was also an unpaid testimonial for Trump’s candidacy, and in it Icahn endorsed his fellow Queens-born businessman.

“I think you need somebody to shake up the establishment in Washington just like you do in corporate America,” Icahn recently told Fortune, reiterating his support while drawing another parallel between Trump and himself.

“I probably have one of the best records on Wall Street,” Icahn boasted in “Danger Ahead.” But even as he spoke, oil prices were going through the floor and crushing his investment holdings.

During the third quarter of 2015, which ended one day after the video’s release, Icahn’s investment fund fell 10.3%. That portfolio, essentially an internal hedge fund managing only Icahn’s own money, fell 18% last year, on top of a 7.4% loss in 2014. Most of his current activist stock bets, as measured by their 13D securities filing price, are under water. (Investors must file Schedule 13D forms when they acquire a stake of 5% or greater in a company and plan to press management for changes.)

Meanwhile, stock in Icahn’s holding company, Icahn Enterprises—which includes $3.4 billion worth of his beaten-down investment portfolio as well $7.6 billion in the value of companies he controls—has fallen about 50% since peaking Dec. 2, 2013.

In late February, Standard & Poor’s said it may downgrade the holding company’s senior unsecured debt to junk status, saying its loan-to-value ratio has “very likely” increased above 45%. Icahn Enterprises had $5.5 billion in debt at year’s end.

Icahn downplays the rating agency’s concerns. “I fight back like Trump does,” he says. Icahn says he has built a bigger war chest than ever and plans to use it to buy “billions and billions” of dollars worth of stock. “We may soon be able to avail ourselves of that opportunity because we think the market is going to go down further,” he says.

Though times have been tough recently, Icahn’s long-term success is undeniable. Since 2000, when Icahn Enterprises became a vehicle for his activist plays, it has registered a 16.5% annualized return. That compares with about 4% for the S&P 500. Since 2004, however, when he launched Icahn Partners hedge fund, the investment portfolio only has an annualized 9.3% return. That’s slightly better than the S&P 500, which has annualized at 7.7% during that time, but trails fellow activist hedge-fund managers Bill Ackman and Dan Loeb, who posted gains of 17% and 12.75%, respectively, over the same time period.

Icahn is certainly richer than Trump (whose claims about his own wealth have stirred extensive debate). Icahn’s fortune is currently estimated by Forbes to be $18.8 billion. That wealth has more than doubled since 2009 thanks to the post-Great Recession bull market, and Icahn Enterprises shares have doubled since the end of 2008, slightly trailing the S&P 500.

After suffering heavy losses in 2007 and 2008, when his hedge fund fell 36%, Icahn bought out his investors and went to work taking full advantage of the rebounding stock market. A 2012 bet on Netflix, for example, soared more than 460%, as CEO Reed Hastings turned the company around after Icahn had built up a near-10% stake. He sold the stake in October 2013. (Some observers have given credit for that and other successes to Icahn’s son, Brett; the New York Post reported this week that Carl Icahn was negotiating a deal with Brett Icahn that would encourage Brett to stay with the family firm and eventually succeed his father.)

Heady gains like those helped Icahn cement his elder-statesman status, and beginning in 2013 he began re-emerging as a public figure, making frequent appearances on CNBC. He opened a Twitter account where he announced his activist plays, took on Apple and soon was having dinner with CEO Tim Cook, who agreed with him that stock repurchases were just what Apple needed. Icahn also jumped into the multilevel marketing company Herbalife, opposite Ackman’s big short.

That’s another affinity he has with Trump: Perhaps befitting their outsider images, both men support controversial MLMs that they’ve defended publicly as legitimate businesses. Trump made $1.3 million in 2014 and 2015 promoting an MLM called ACN, which has survived several regulatory probes. For Icahn, Herbalife—which is also under investigation by regulators—remains one of the best-performing live 13D holdings in his portfolio. Though trading well below its highs, Herbalife is up 53% since he took a 17% stake in early 2013, giving him a paper gain of nearly $300 million. “I thought the stock was very undervalued,” Icahn told Fortune’s Roger Parloff last year. “I still do.”