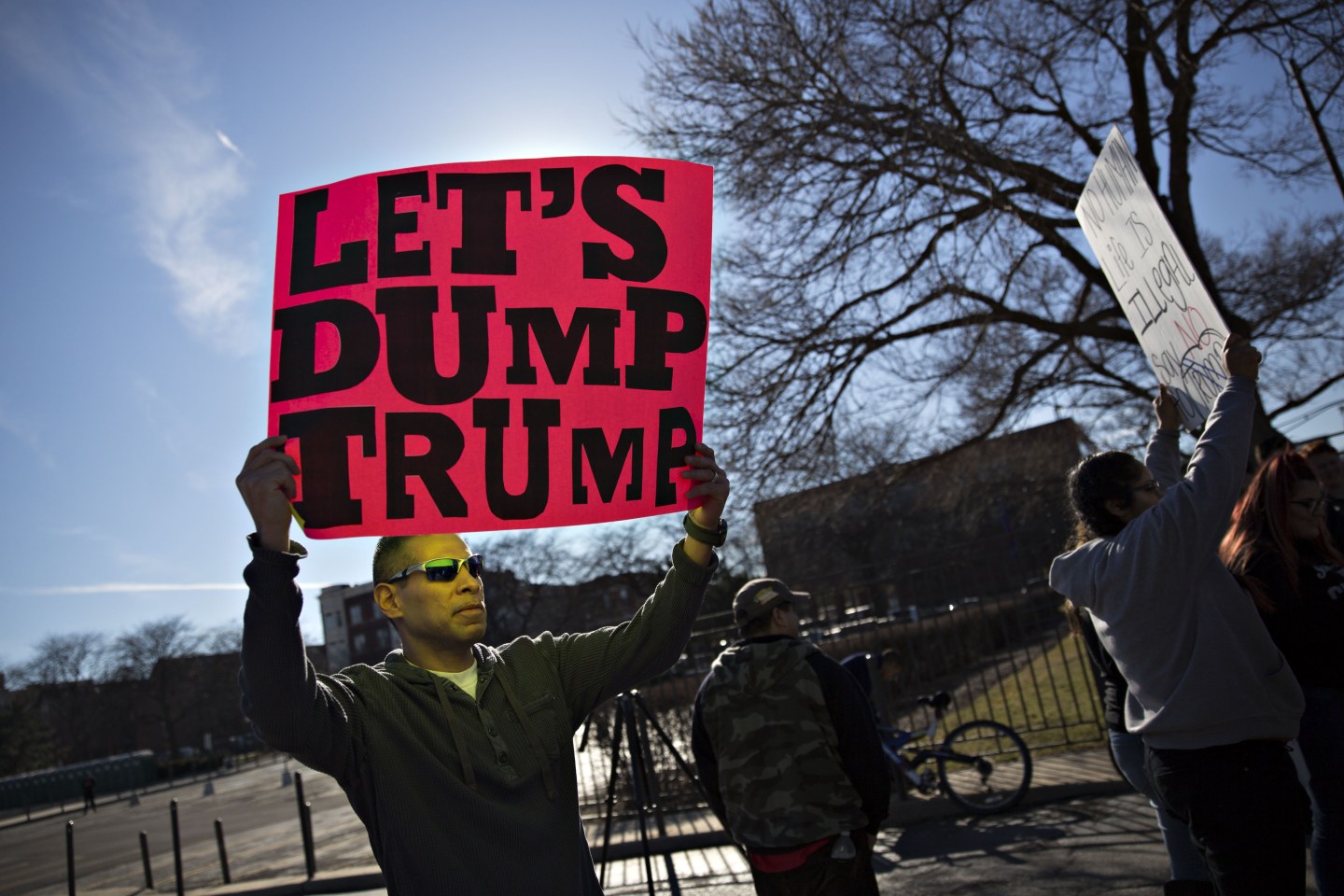 On Friday night, Republican frontrunner Donald Trump had to postpone a rally in Chicago because too many protesters showed up and, even before the billionaire businessman took the stage, things got ugly. Really ugly.

The Black Lives Matter and other mostly minority protesters went toe–to-toe with Trump supporters, some of whom were wearing confederate flags. The scene looked more like a race riot from the 1960’s than a Republican political event in 2016. The Republican establishment reacted with a sad shrug: I’ll still support the nominee, rival Marco Rubio said, but “it’s getting harder every day.”

The melee was a direct result of Trump’s us-vs.-them rhetoric that has catapulted him into a surprising first place in the GOP contest. His anti-immigration stances—labeling Mexican immigrants drug dealers, criminals, and rapists, calling for a suspension of all immigration from Muslim countries because “Islam hates us,” and refusing at one point to condemn white supremacist groups—have outraged minority groups.

In lieu of holding his rally, Trump called around to the cable networks, which ran live for hours with footage of the violent tussles as they spilled out onto the streets. He refused to apologize or soften his tone. Instead, the business mogul remarked how sad it was that people couldn’t even hold political rallies any more. More evidence, he said, that America “is going down hill,” as he told MSNBC.

Trump leads the pledged delegate count with 459 to Texas Sen. Ted Cruz’s 360, Florida Sen. Rubio’s 152 and Ohio Gov. John Kasich’s 54. It’s a lead that is likely insurmountable—Cruz would have to win 70% of the remaining votes to pass Trump to the 1,237 needed to win the nomination. That’s highly improbable given the continued presence of two other candidates in the race and Cruz’s unpopularity with the party establishment.

The remaining states to vote are mostly blue states, like Illinois, which have never played a role in picking the GOP nominee. Never in recent history has a Republican process gone on this long. How will GOP voters in New York, California and New England react to such scenes?

“Blue State Republicans don’t differ much with Red State Republicans on law and order,” says Larry Sabato, head of the University of Virginia’s Center for Politics. “The Chicago event has incensed [Trump’s] followers, and one doubts that the melee is the last of its kind. The law-and-order theme always appeals to Republicans.”

Minority groups behind the protests have pledged to continue to disrupt Trump events, which sets the stage for a lot more ugliness even as the candidate in recent days has tried to reign in his enormous audiences—some 25,000 were expected in Chicago—by checking at doors for swastikas, confederate flags and Bernie Sanders paraphernalia.

In the short run, there’s little likely impact to more disruptions, says Charlie Cook, head of the Cook Political Report. “People are getting dozens of impressions about Trump every week and to date, no single event has seemed to have any measurable impact, positively or negatively,” Cook says.

But in the long run, Friday’s ugly scene—and the scenes to come—set the stage for a dramatic general election. Up until this point, Democrats have watched GOP voter turnout surges with trepidation. Republican contests across the board have seen millions of new voters, sometimes by as much as 250% over the last open seat race for the White House in 2008. Democratic turn out, meanwhile, has been below 2008 levels.

Trump as a general election candidate might single handedly solve that problem for Democrats: Friday night proved he inspires as much passion in Democrats trying to stop him as he does new Republicans supporting him. The forthcoming general election looks to be nasty, bitter and potentially violent, but as Trump would say, it’ll also be Yuge.