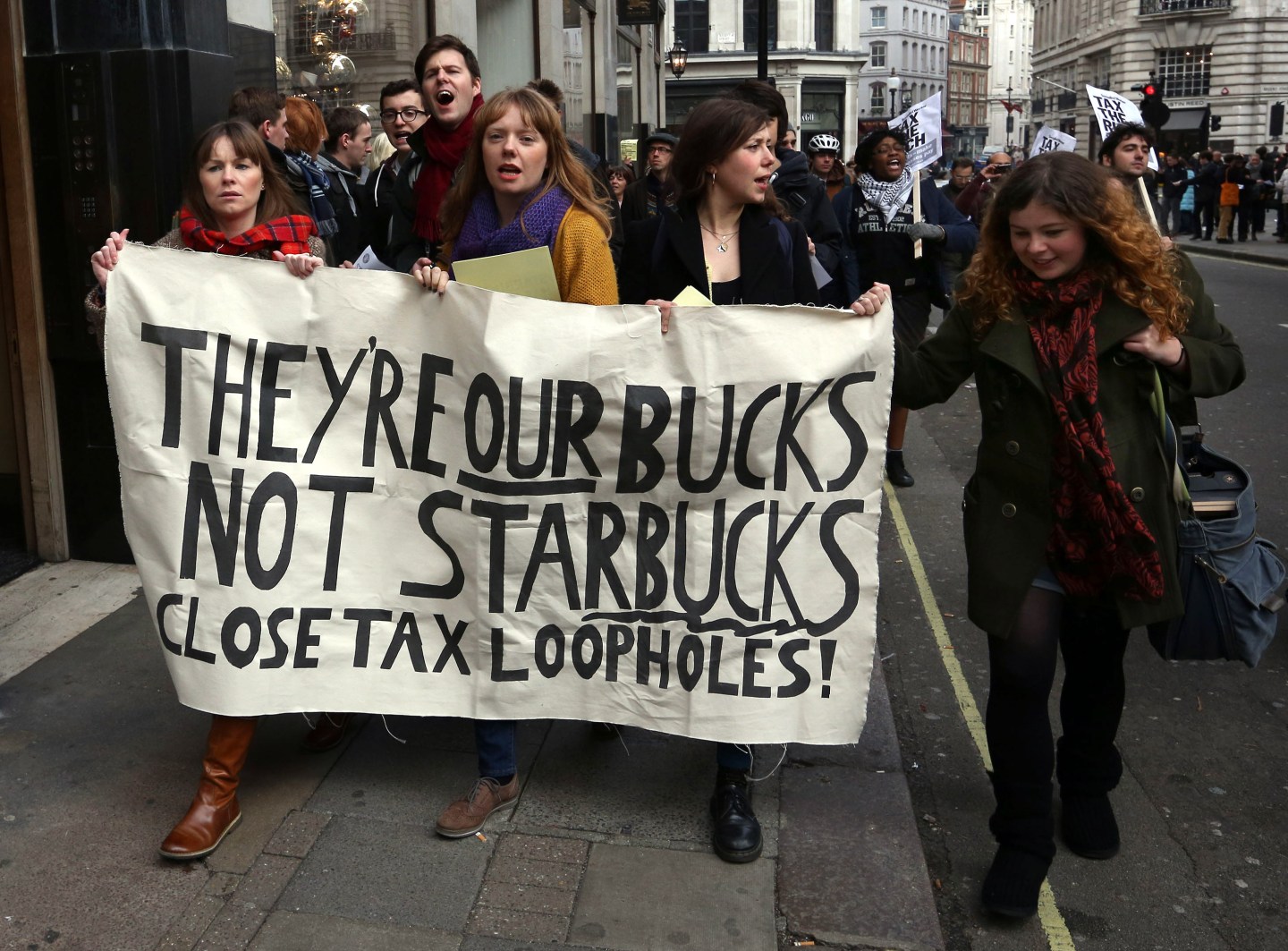 LONDON, ENGLAND - DECEMBER 08: UK UNCUT supporters protest at a Starbucks coffee shop near Regent Street on December 8, 2012 in London, England. UK UNCUT are holding a day of protests at various Starbucks throughout the United Kingdom after the coffe chain were revealed to be paying almost no corporation tax. (Photo by Peter Macdiarmid/Getty Images)
Photograph by Peter Macdiarmid—Getty Images

It’s tax season—and that’s apt for companies who are under the microscope of European tax authorities.

In February, reports emerged that the European Commission is considering a proposal that would force multinationals to reveal their tax bills in 28 European countries.

Why? Because corporate tax-dodging costs the EU between $54.5 billion and $76.4 billion a year, according to a study by the European Parliamentary Research Service. Companies allegedly achieve this by funneling their profits made in Europe to low-tax countries like Ireland and Luxembourg, and regulators now want corporations to fork out taxes for profits made in each respective country.

“The days are numbered for companies that avoid tax at expense of others,” Pierre Moscovici, the top EU official responsible for tax, told CNN.

Here’s a rundown of the multinational companies that have allegedly been jumping through tax loopholes in Europe:

Google’s (GOOG) relationship with authorities in Europe have been rocky (the company is currently fighting antitrust charges from the European Commission), and none more so than when it comes to taxes. According to Reuters, in 2014, Google had moved around 10.7 billion euros (roughly $12 billion) from its Dutch arm to a Bermuda-based, Irish-registered affiliate called Google Ireland Holdings. (The money was received as royalty payments from its Irish affiliate Google Irish Limited, where most non-U.S. revenues are apparently channeled.)

That tax strategy, cleverly known as a “double Irish, Dutch sandwich,” reportedly helped its parent company Alphabet enjoy an effective tax rate of just 6% on its non-U.S. profits, since it passes through a comparatively lower Irish corporate tax rate of 12.5% and a Bermudan tax rate of zero. Revenues at its Irish affiliate were a reported 18 billion euros in 2014.

Google and the U.K. government recently agreed on a 130 million pound-payment ($181 million) to settle tax disputes. France and Italy are pursuing the company for hundreds of millions more in back taxes.

“Google complies with the tax laws in every country where we operate,” the company said in a statement, as reported by Bloomberg.

About $8 billion in back taxes—that’s how much Apple (AAPL) could be required to pay if the European Commission finds the tech giant guilty of using subsidiaries in Ireland to avoid paying heftier taxes on non-U.S. revenues. Apple has been accused of being one of the first to use elaborate methods to avoid paying more taxes; other countries are probing Apple’s alleged lower tax deals with countries like Ireland.

According to a study released last year by the liberal nonprofit groups the Center for Tax Justice and the U.S. Public Interest Research Group Education Fund, Apple has booked $181.1 billion in offshore profits, more than any other company. Yet, it pays a 2.3% effective tax rate on it, according to the study.

According to Bloomberg, if the Irish government is forced to recoup taxes from Apple, the company may face a $19 billion tab in the worst-case scenario. In response, the company said in a 2014 report that it “has received no selective treatment from Irish officials over the years.”

The Netherlands has appealed and challenged the findings of the commission, and Starbucks said they supported the government’s efforts.

Yes, even one of Europe’s own has been accused of tax dodging. Swedish multinational company Ikea has been accused of not paying more than 1 billion euros in taxes over the past six years. Based on a report by the Green party, Ikea was using its subsidiary in the Netherlands to move money from its European stores, and then pushing it to tax havens in Lichtenstein and Luxembourg.

EU regulators said they would examine the report. On Ikea’s part, the company said: “The Ikea Group pays taxes in accordance with laws and regulations, wherever we are present as retailer, manufacturer or in any other role.”

Amazon (AMZN), it seems, has decided that it might just be worth it to pay more in taxes. Reports coming out last May indicated that the online retail giant would start paying more taxes in the European countries it was conducting business in, rather than funneling cash to a holding company in Luxembourg. In the U.K., The Guardian reported that Amazon became the first technology company to unwind its complicated tax structures, and would start booking its sales in the U.K.

This after politicians called for a boycott of Amazon after it was discovered they were paying 4.2 million pounds ($5.86 million) on the back of 4.3 billion pounds ($6 billion) worth of sales. Even in the U.K., Amazon were reportedly able to get away with low tax payments because it attributed payments in Europe to a subsidiary in Luxembourg.

That practice is set to end. “More than two years ago, we began the process of establishing local country branches of Amazon EU Sarl,” the company said in a statement reported in the Daily Mail, referring to its subsidiary in Luxembourg. “As of 1 May [2015], Amazon EU Sarl is recording retail sales made to customers through these branches in the UK, Germany, Spain and Italy. Previously, these retail sales were recorded in Luxembourg.”

In February, fashion retailer Gap (GPS) became the latest brand name to join the row over unpaid taxes in Europe when reports surfaced that the San Francisco-based company had paid almost no tax in Britain since 2011; this despite reaping sales of around 1 billion pounds ($1.4 billion). The retail giant achieved this feat by allegedly moving money through a multi-million-pound “royalty fee” to a Dutch company called Gap (Netherlands) BV. This cratered U.K. profits, and effectively meant Gap didn’t need to pay corporate taxes on it.

The Seattle-based tech company is reportedly another corporation that has used Luxembourg as a safe haven from tax authorities. In 2012, it was reported that Microsoft (MSFT) sent cash generated from its new Windows 8 operating system to Luxembourg, and avoided paying U.K. corporate tax on more than 1.7 billion pounds ($2.4 billion) in sales.

Furthermore, the company’s U.K. operation reportedly paid 19 million pounds in corporate tax in 2011, which was just 2.8% of revenue. Investigations also showed that Microsoft had reaped huge sales from 2008 to 2011, yet paid low taxes. Microsoft’s response to allegations of tax dodging? “We serve customers in hundreds of countries all over the world and our tax structure reflects that global footprint,” the company said in a statement given to The Seattle Times.