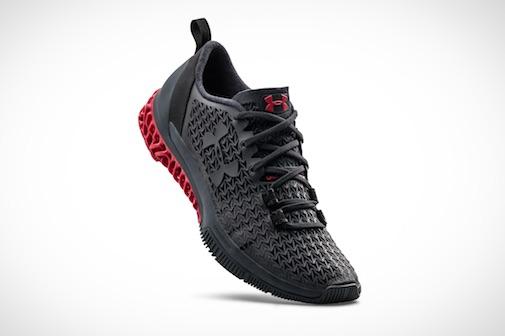 Under Armour is sneaking into the 3D-printed shoes craze with the launch of a very limited-edition performance training shoe that will go on sale later this month.

The Baltimore-based athletic gear maker is the latest to experiment with the innovative manufacturing process that has already lured rivals including New Balance, Nike (NKE) and Adidas (ADDYY).

This week, Under Armour (UA) said the UA Architech features a 3D printed midsole and a 3D upper design that helps provide a precision fit. The training shoe was conceptualized during a two-year research and development process that Under Armour says involved the study of geometric shapes and structures to come up with the midsole design. In 3D printing, computerized machines layer material to create three-dimensional objects.

The UA Architech won’t move the sales needle too much for Under Armour, as the initial run of this line of shoes will only be for 96 pairs. The product will retail at $299.99 each and go on sale on March 18.

While 3D printed shoes may not generate high sales volume today, it is important for shoe makers like Under Armour to experiment with how that form of manufacturing can help augment the design and construction process for the company’s shoes.

Still, footwear remains a strong growth channel for Under Armour. Sales for that category soared 57% to $677.7 million in 2015 from the prior year, far outpacing the 22% jump for the larger apparel category. Under Armour, now 20 years old, only entered the footwear market a decade ago but is quickly gobbling up a bigger piece of the pie.

Investments in product innovation within the footwear category have helped Under Armour gain market share recently, analysts have reported, though much of the gains have been attributed to increased sales of basketball shoes. Under Armour’s relationship with NBA all-star Stephen Curry has been particularly lucrative.

Within the running and training categories, Under Armour still commands a slim market share. Larger rival Nike commands sizable market share across all the footwear divisions it competes in, so brands like Under Armour have a lot of room to grow–but also face a strong rival to win market share.