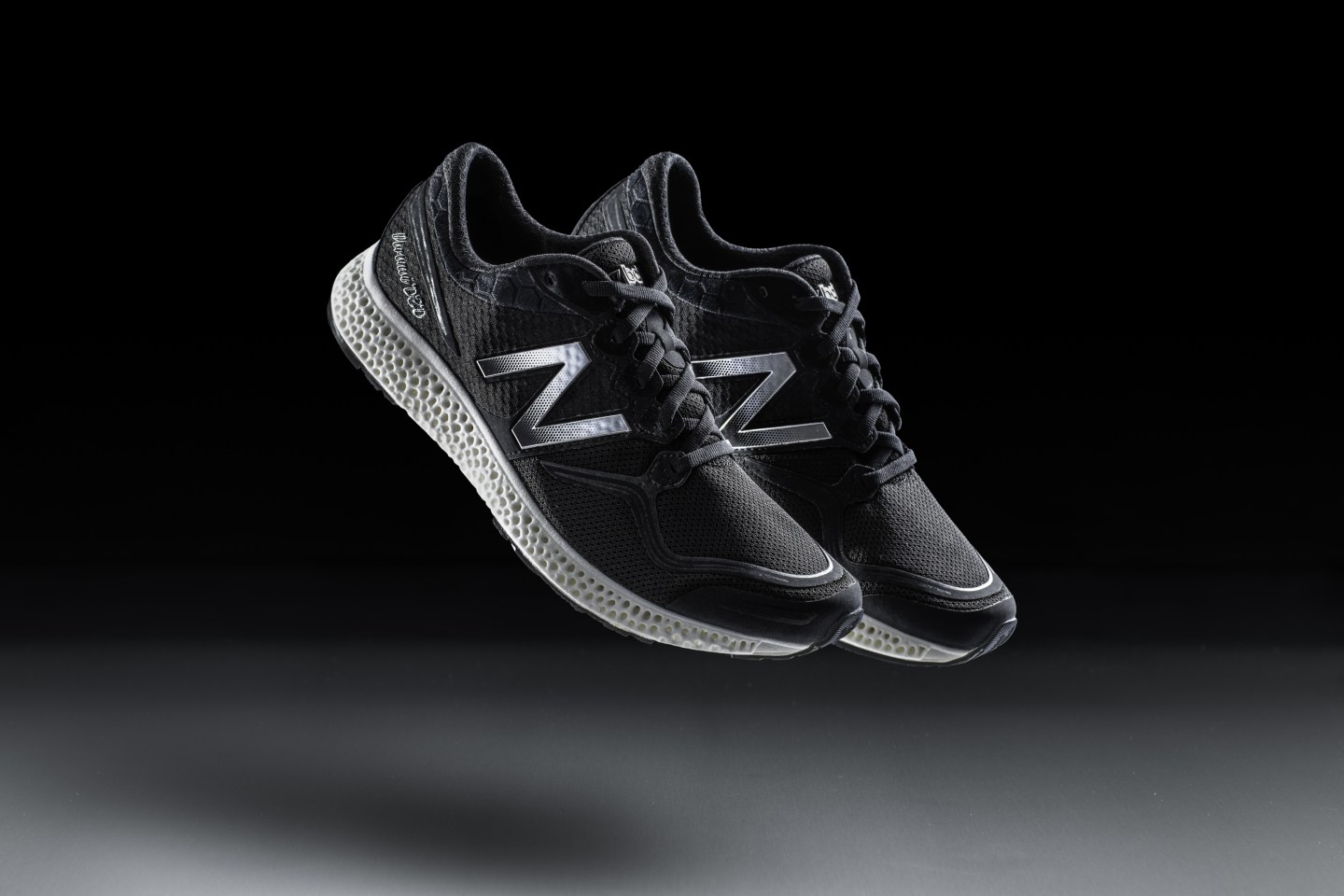 Next month at the Consumer Electronics Show, New Balance will unveil the footwear of the future: A running shoe with a 3D-printed midsole.

By April, the athletic footwear company expects to start selling this limited edition running shoe, the first of its kind, in its hometown of Boston before releasing it to select stores around the world. But for New Balance, which has been testing 3D-printed midsoles for a few years, the opportunity a partially 3D-printed shoe brings a company that makes upwards of 90 million pairs of shoes a year is grander than just being a goody to be gaped at by CES attendees.

“There is potential that printed parts could be superior to the foam parts we’re making now,” says Katherine Petrecca, general manager for studio innovation at New Balance. “But the future of on-demand manufacturing is also very attractive.”

In a November announcement, New Balance said that better flexibility, strength, and cushioning are all benefits of its shoe with the 3D-printed midsole. (For the hard core 3D-printing enthusiasts: The midsole was printed using a selective laser sintering process that fused together layers of a powdered elastomeric material, newly developed by 3D Systems (DDD) specifically for this shoe.) For consumers, being able to have a company 3D print a shoe means having the ability to design unique shoes, ones with aesthetic attributes they picked that fit perfectly because they were printed from scans of their own feet.

But beyond the ability for consumers to customize their own shoes, there’s a longer-term trajectory of where 3D printing becomes a boon to the shoe industry. Behind the scenes, 3D printing has the potential to drastically shorten the supply chain—and therefore slash costs—for the shoe companies.

“It does create cost savings because we’re not utilizing molds,” Petrecca says. “It saves quite a number of steps and quite a lot of time when we’re able to go from design to part in very short order.”

On average, it takes about one to two years for a shoe to go from concept to being shipped. What happens when that process takes weeks, if not days?

“Shoe manufacturing is really archaic,” says Kegan Schouwenburg, founder of Sols, the New York-based, Carmelo Anthony-backed makers of 3D-printed custom insoles. “On-demand manufacturing and mass customization is kind of the Holy Grail of footwear. There’s just a massive opportunity there because you’re able to create a product that is truly customer-driven.”

No surprise, then, that New Balance isn’t the only one experimenting with 3D-printed midsoles. In October, Adidas announced its Futurecraft 3D midsole, 3D-printed in partnership with European firm Materialise, and its vision for the future of 3D-printed shoes. “Imagine walking into an Adidas store, running briefly on a treadmill, and instantly getting a 3D-printed running shoe,” read the Adidas (ADDYY) news release.

Nike, which has already printed and tested 3D-printed studs for football cleats, is also giving 3D printing a look. At the Geekwire summit in October, COO Eric Sprunk spoke about customers in the future walking into a Nike store and having a 3D-printed shoe made in a matter of hours. Indeed, what Nike (NKE) does currently with its Flyknit sneakers isn’t all that different from what it might be able to do with a 3D printer sometime in the next decade.

“This is a file we send on a computer. It goes to the knit machine, and the operator puts the file into the machine and out comes a shoe,” Sprunk said at the summit.

“Obviously our traditional [manufacturing] systems are built for massive scale. That’s where [3D printing] needs to intersect,” says Petrecca. “But the potential is extremely real in the long-term for on-demand manufacturing.”

What New Balance plans to show off at CES seems to be just a first shot in what’s shaping up to be a three-way race toward a new era of shoe manufacturing. What was once conceived solely as just a physical object—a shoe, in this case—now becomes something that acts like software, and can therefore be tweaked and upgraded many times. An on-demand model for shoe production via 3D printing means eliminating overhead because no shoe is produced until a customer orders one, and any shoe ordered will end up being a bespoke product made from an individual scan of your foot.

“It’s an industry where people are competing with marketing dollars,” Schouwenburg says. “But if you can compete with product, suddenly your customer retention and ability to engage with the customer is light years ahead of everybody else.”