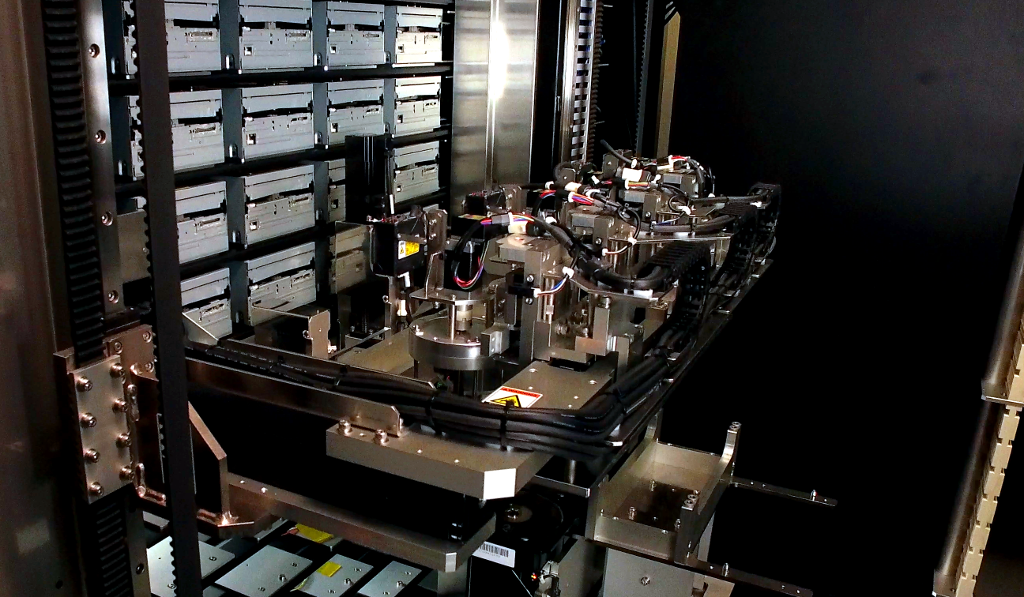 Frank Frankovsky, the data center guru out of Facebook and the Open Compute Project, says optical storage—the technology behind Blu-ray DVDs—is finally ready for the data center, and he has the product to prove it.

Frankovsky, who is now chief executive officer of Sony Optical Archive Inc., says his company’s new Everspan Optical Disk Archiving system, combines the durability of optical media with the performance and storage capacity needed for data archiving. Slow speed and capacity constraints have kept optical storage out of the huge data archiving jobs that now flow to tape systems or hard drives. At least up until now, Frankovsky says.

The need for affordable and reliable, long-term storage has only been exacerbated by the big data explosion, which has ratcheted up pressure on companies to keep records of everything they do. That’s the problem that Sony’s Everspan system aims to address.

“This is a product that will finally make tape obsolete,” Frankovsky told Fortune in an interview. To be fair, that’s something we’ve heard for the last few decades. Tape is slow, prone to wear and tear, and generally a pain in the butt. People have been writing its obituary for years, but it’s cheap and gets the job done.

Nevertheless, Frankovsky is sticking to his guns. “The thing is that tape and hard drives are not designed for archiving, and the one trend that is absolutely true in all cases is that people want to store more data and to do it for a longer period. And they want it to cost less,” he argues.

Everspan, he said, checks off all those buttons.

Several customers, including Los Alamos National Laboratory, are using early versions of the library, he said. The product includes three components—a base unit, a robotic unit, and up to 14 expansion units. The robotic component, something Sony is especially adept at, means that the storage media is never touched by human hands. If the full complement of 64 optical array drives is incorporated, one system can handle a massive 181 petabytes (PBs) of data. The speed at which data can be shipped around the arrays (aka the average transfer rate) is 280 megabytes per second.

In archiving, as you might guess, longevity is everything. “We have such durable media, we are willing to guarantee it for 100 years,” Frankovsky promises. The only condition is that the storage venue has to be “a bit cooler than Texas in July,” he adds. Specifically, the room has to be kept at or below 86 degrees Fahrenheit and at “something less than 96% humidity” to qualify, he notes.

The beauty of optical media is that durability compared to tape and hard drives which have to be changed out every few years. After the tsunami in Japan, optical disks were found under raw seawater that were dried out and operative again, he points out.

Frankovsky knows from optical storage. Facebook (FB), where he was vice president of hardware design and supply chain, uses optical media to store all those gazillions of user photographs, for example. Imagine the hue and cry if those photos were to disappear due to some archival mishap?

Most of Everspan’s customers are focused on write-once, read-many times (WORM) media to store data that they will never want to change. That’s key for archiving data that must be immutable or unchanged for regulatory, legal, or compliance reasons. Everspan can also support re-writeable media—although that will cost more, and the media won’t last as long.

Frankovsky thinks Everspan can do the job of tape at a lower cost, but there is no list price for the machine. So customers will have to scope it out for themselves. He also thinks it will also eat into the market for low-cost SATA drives as well.

In the storage universe, companies typically use different technologies for different needs. For archiving vast amounts of data that may not be needed for years at a time—for the usual CYA regulatory and compliance reasons—tape has been key because of its low cost. Hard drives, aka spinning disk storage, are used for data that must be more accessible faster than archival stuff, thus making them pricier. Flash or solid-state storage is both faster and more expensive, but also being employed increasingly for jobs where speed is a priority.

Gleb Budman, chief executive of Backblaze, a cloud storage provider that manages to offer backup storage at a price that rivals everyone else’s, including Amazon Web Services, is interested in what Sony (SNE) has to offer here. “We’re always looking to reduce the cost of cloud storage, and we go to insane lengths whether it’s using consumer drives or designing our own storage pods,” he remarks.

Budman says he has wondered if tape makes sense in his scenario, but he just doesn’t think so. “From a pricing standpoint, it’s just not dramatically cheap. Its advantages are you can put it on a shelf, and it doesn’t suck up power when it’s not in use. And you can shove a lot of tapes into a small space. But the latency on tape is terrible, and it takes a long time to seek things,” he reflects.

When you read, write, or erase on tape, you’re constantly scanning back and forth, which builds up to a lot of wear and tear. For those reasons, Everspan is worth a look, Budman suggests.

As for competitors in the optical storage arena, Sony is both collaborating with and competing with Panasonic (PCRFY). The two companies designed optical disk media for archiving purposes and are building their own competitive systems around that media.