This Game Company is Using VR to Preserve History 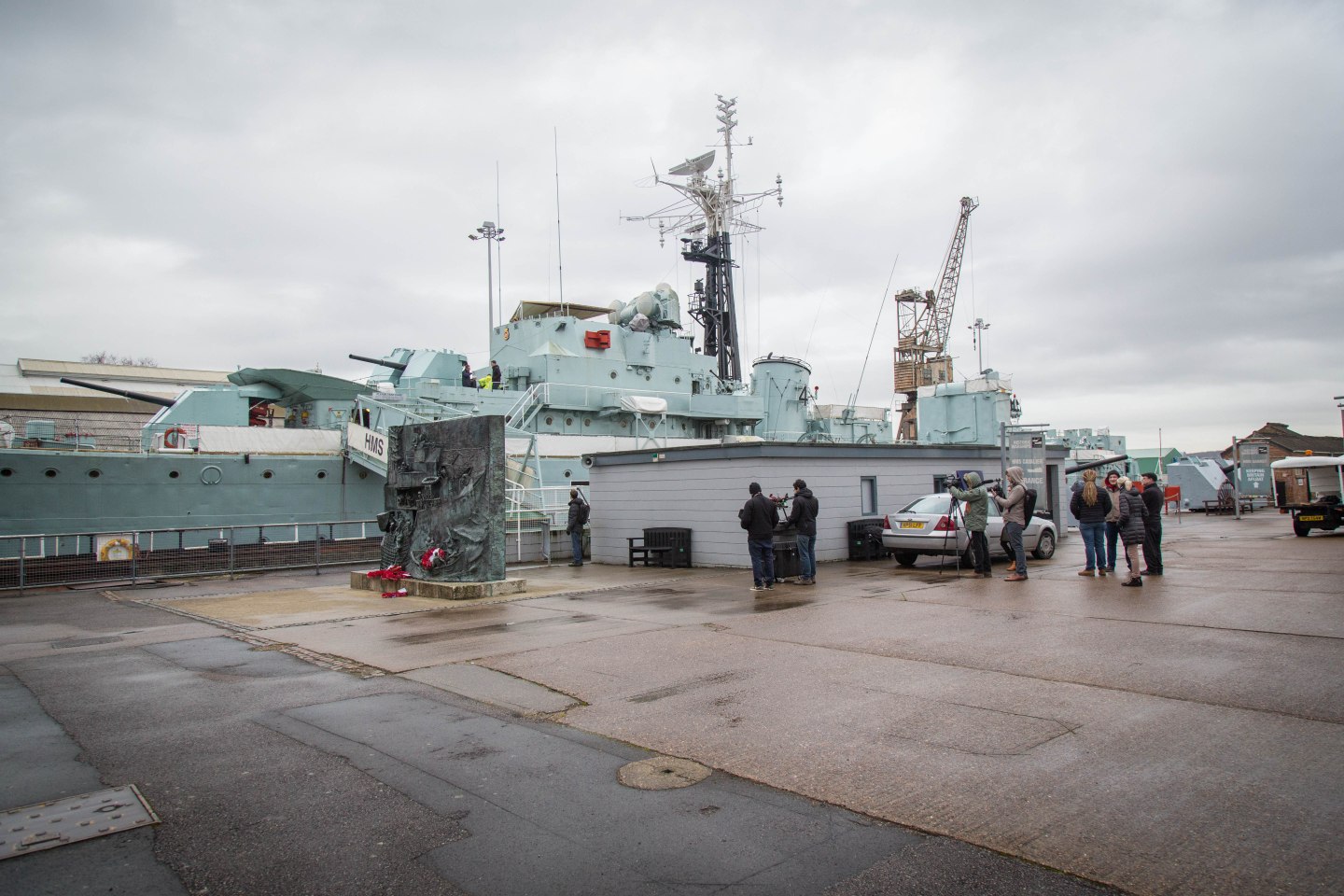 Today, the HMS Cavalier destroyer guards the historic Dockyard Chatham in England, but her guns still fire (blanks) and her decks remain open to any tourists who venture to the southeast English seaside town. A museum since 1998, now her history will live on forever through virtual reality thanks to a new program by video game publisher Wargaming.

A team of 360-degree filmmakers spent a few days aboard the WWII destroyer in February with BBC presenter Dan Snow and Barry Knell, who served on the ship for over 18 months in 1960 and later wrote a book about the vessel called The Fastest Ship in the Fleet.

Knell noted the Cavalier was one of 96 emergency large destroyers ordered for the war effort between 1940 and 1942. They were the first ships that could cross the Atlantic without having to refuel. The Cavalier, the last remaining of this class of warships, was ordered in 1942, built in 1943, and officially began her tour in 1944. But her guns were used to shoot down German warplanes when the dockyard came under attack while still in dry dock at Chatham in 1944.

“Her anti-aircraft guns were in action before she had even been commissioned,” Snow said. “Then she went up in the arctic convoys for the North Atlantic. She fought in the English Channel and played an important role looking for German U-boats and in air defense against German aircraft. Then she went out to the Pacific and caught the last few months of the Pacific campaign, helping the much bigger American Navy bring the Japanese Empire to its knees. This ship saw a lot of action.”

These are the types of details that virtual reality users will learn from Snow and Wargaming military specialist Richard Cutland as they offer a 360-degree tour of nine key areas above and below the ship’s deck in “Virtually Inside the Warship.” The free video is part of an ongoing series of WWII virtual reality documentaries that will explore key tanks, vessels, and planes currently in museums or located in places with limited access for the typical historian or gamer.

“Virtual reality is incredibly exciting,” Snow posited. “I’m a historian. I’ve spent my entire life trying to get great historical properties, museums, collections, archives, ships, and aircraft out there for the world to experience. We used to use 2D and TV shows and YouTube films. But VR is a paradigm shift. Now anyone, anywhere in the world is going to be able to access this vessel, walk around it, and actually experience it almost as if they were here.”

That experience is improving by the project. Virtual reality filmmaking is still in its experimental state, and Wargaming is learning how to best bring history to life through 360-degree video. The company has partnered with Google on these projects, which certainly helps.

Matt Daly, special projects lead at Wargaming, said the first project, “Virtually Inside the Tanks,” which allows viewers to experience riding in a moving T55 tank, taught his team that 360-degree viewers want to watch about three and a half minutes of content. They had packaged a six-minute experience from that shoot at The Tank Museum in Dorset, England, which houses the largest collection of tanks in the world.

“On one side, we have gamers that came into our universe with some level of interest in the history of WWII, and on the other side, we have people that came in as historical enthusiasts who are fascinated by the accurately detailed vehicles and historical battles,” Daly explained.

The “Virtually Inside” series of 360-degree content is a natural extension of these players’ experience with the game, according to Daly. VR uses a lot of the same language as video games.

“The idea is that we can take that interest and momentum from the video game world and dive into something that’s deeper that tells a narrative story about what really happened in WWII,” Daly remarked. “You’ve played with these ships and tanks. Now you can learn what it was like to really serve on a ship like this.”

Last year, Wargaming recreated a 1941 tank battle with T-34 and Panzer III tanks, artillery, warplanes, and 40 infantry reenactors. The 360-degree shoot was filmed at the Stalin Line Museum outside of Minsk, Belarus.

“Eventually, we’ll be able to create more and more of these VR experiences around ships and vehicles and historical sites,” Daly promsied. “We’re essentially teleporting people into these experiences and making them feel like they’re part of a conversation with historical experts like Richard Cutland and Dan Snow.”