‘Full House’ and 7 Other Long-Forgotten TV Shows Coming Back 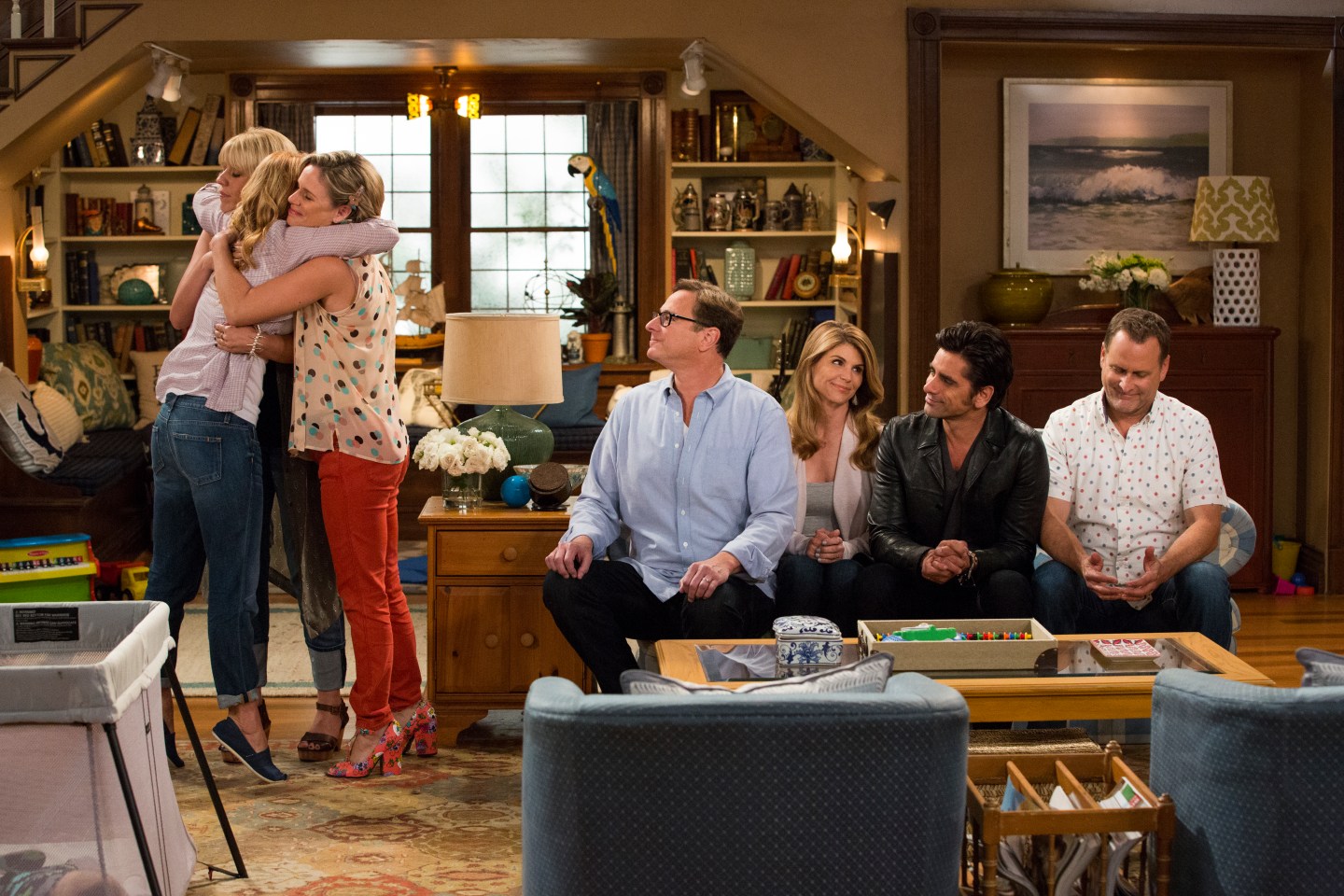 Get ready to travel back in time. The sitcom “Full House” is returning to television on February 26 as “Fuller House,” courtesy of Netflix.

The new show is a reboot of the sitcom that went off the air in 1995, and it reunites most of the original cast. If you’re wondering why it’s being brought back after more than 20 years, you can ask the same thing about several other long-forgotten shows that are also in the midst of being resuscitated.

The reboots are going to air on network television, cable and streaming services, and have only just begun to roll out, with further shows coming back throughout this year and the next. The reboots revive shows that span multiple decades, some dating back to the 1960s and some that went off the air less than a decade ago. Many of the reboots feature members of the original casts, though in some cases, the sad fact of human mortality has made that impossible.

Those observing this trend may well wonder why we now find ourselves in the tight grip of reboot fever. Some of it can simply be chalked up to desperation — traditional network television simply isn’t pulling viewership numbers that it once did. In December, Nielsen Co. confirmed that traditional television viewing has been in decline since 2010. By contrast, television audiences had grown every year up to that point since 1949.

And certainly, there is a big fear about losing millennials, the 18-34 demographic. The Nielsen study showed that among 18-to-34-year-olds, the use of smartphones, tablets, streaming boxes and game consoles had increased by more than 25% just between 2014 and 2015. Among that same demographic, traditional television viewing had fallen by 10% during the same period.

But many millennials were not yet born when some of the shows being rebooted were originally on the air, and a few of the shows never ran in syndication, so this strategy may seem like a questionable way to woo audiences.

But Chris Brantner, founder of the blog Cut Cable Today, isn’t so sure. His blog teaches television viewers how to dump cable and embrace cord-cutting, and he told Fortune that these reboots may help networks transition into the streaming-dominated landscape that seems to be fast approaching.

“It makes sense,” he said. “It’s a formula that’s worked with movies. Why not apply it to TV? I think now is a good time for those 90s and early 2000s shows. Millennials are getting older and feeling nostalgic about the shows they watched as kids. Not to mention, a lot of these shows already have cult followings. So it seems like a pretty good risk to take.”

The first wave of reboots is beginning to air, so Brantner’s theory is about to be tested. In the meantime, Fortune takes a look at the old shows that are being given new life as 21st century reboots.

In the late 1980s and early 1990s, ABC’s “Full House” reigned supreme. The story of a widower named Danny Tanner who joined forces with his best friend and his brother-in-law to raise his three daughters, it made stars out of John Stamos and Bob Saget, as well as Mary-Kate and Ashley Olsen.

The reboot, “Fuller House,” focuses on Tanner’s adult daughter D.J. who, like her father, is widowed with three children. Sadly, the reunited cast will not include the Olsens, who now work full-time on their two fashion lines, The Row and Elizabeth & James. In a statement, executive producer Robert L. Boyett said that the Olsen twins “are still very much considered family… and I support their choice to focus on their fashion brands and various business endeavors.”

From 2000 to 2007, “Gilmore Girls” was one of The WB network’s most popular shows. The story of a single mother and her daughter, it became famous for its fast-paced dialogue, which the characters deployed at roughly the same speed as a livestock auctioneer. It went off the air in 2007, just as Time had named it one of its “All-Time 100 TV Shows.”

In January, the reboot was officially confirmed. Original cast members Lauren Graham and Alexis Bledel will return, along with Daniel Palladino and Amy Sherman-Palladino, the original executive producers. Lauren Graham, who portrayed Lorelai Gilmore, took to Twitter with the message:

I CAN NOW CONFIRM: it's time for me, and this jacket I stole in 2007, to return to work.@netflix #GilmoreGirls pic.twitter.com/tBb07J9oO1

“MacGyver” starred Richard Dean Anderson as the titular secret agent. He carried no lethal weapons and saved the day using only improvised contraptions that he had cobbled together, such as in the 1985 pilot, in which he disarmed a missile with a paper clip and stopped an acid leak with a candy bar.

“MacGyver” became the butt of relentless jokes on “The Simpsons” as the favorite show of Marge Simpson’s chain-smoking sisters Patty and Selma, but apart from these two fictional characters, it was hard to envision a grassroots movement demanding that the show return. However, “Furious 7” director James Wan worked diligently to revive it, and in October CBS Studios announced its triumphant return to the airwaves.

The Fox series “Prison Break” aired from 2005 to 2009 and focused on two brothers, one of whom sat on death row for a crime he didn’t commit, and another who tried to help him escape. The series predicted the future in one interesting way – in 2006, it inspired a spin-off series called “Prison Break: Proof of Innocence,” which was made exclusively to be viewed on mobile phones. This made it the first series that a viewer could “stream” at his or her own leisure from a handheld device.

The return of “Prison Break” was announced by Fox in August. A limited series consisting of 10 episodes, it will star series originals Wentworth Miller as Michael Scofield and Dominic Purcell as Lincoln Burrows, and 20th Century Fox Television co-chair Dana Walden described it as “a bit of a sequel.” There is a small detail – the Michael Scofield character died in the 2009 direct-to-video series finale “Prison Break: The Final Break.” Walden explained that the reboot would offer “a logical and believable explanation to why the characters are alive.”

There is perhaps no television show that’s been the subject of more reboots, sequels, spin-offs, re-imaginings, rebirths or resurrections than the original “Star Trek,” which aired from 1966 to 1969. Despite only airing for only three seasons on NBC and never finding much of an audience in that time, nobody would dispute its long-lasting popularity or effect on popular culture today.

The show spawned four other subsequent series, “Star Trek: The Next Generation,” “Star Trek: Deep Space Nine,” “Star Trek: Voyager” and “Star Trek: Enterprise,” as well as numerous movies and two movies directed by J.J. Abrans of “The Force Awakens” fame. So one can be forgiven for rolling their eyes at the news of yet another “Star Trek” series, set to debut in January 2017 on CBS All Access, the network’s on-demand and live streaming service.

Little is known about the new series thus far. Indeed, even the official Star Trek website offers no information about new characters, storylines or alien races. Still, it’s a safe bet that a franchise with as zealous a fan base as “Star Trek” will not lack for viewers, and the audience is likely to provide the first real acid test of whether or not a traditional network’s streaming service can compete with the Netflixes and the Hulus.

Tales From The Crypt

Between 1989 and 1996, HBO ran the horror anthology series “Tales From The Crypt.” A throwback to the 1950s pulp comic series of the same name, the episodes featured different actors and directors, many of whom had directed classics of the genre themselves, such as “Pet Sematary” director Mary Lambert and “The Texas Chainsaw Massacre” director Tobe Hooper.

In January, a series reboot was announced, with “The Sixth Sense” director M. Night Shyamalan attached. All fine and good, but the series is set to broadcast on TNT, and as such will be subject to an entirely more tame set of standards and practices than it was when its home was HBO, where blood and guts flow freely. It remains to be seen whether fans of the original will tune in to a highly sanitized, TV-13 version of the show.

ABC’s “Twin Peaks” was easily one of the weirdest shows ever to appear on a major network. Created by cult film director David Lynch of “Eraserhead” and “Blue Velvet” fame, the story followed Kyle MacLachlan as FBI agent Dale Cooper as he investigated a murder in the small town of Twin Peaks.

It aired in 1990 and 1991 and inspired the 1992 movie prequel, “Twin Peaks: Fire Walk With Me,” which unlike the show was utterly savaged by critics and even Lynch fans, including “Pulp Fiction” director Quentin Tarantino.

“After I saw ‘Twin Peaks: Fire Walk With Me’ at Cannes, David Lynch had disappeared so far up his own a** that I have no desire to see another David Lynch movie until I hear something different,” Tarantino said.

Despite the drubbing that the movie took, fondness for the show never went away, so the 2014 announcement that Showtime would bring it back was met by the nearly religious frenzy of its fans. There will be at least nine episodes, all directed by Lynch, and star Kyle MacLachlan will return. In November, CBS president and CEO Leslie Moonves said that the new series would premiere in 2017.

Originally airing on Fox, “The X-Files” ran from 1993 to 2002. The show followed FBI agents Mulder and Scully, played by David Duchovny and Gillian Anderson, respectively, as they investigated paranormal and possibly extraterrestrial activity. Though the show was popular and regularly won accolades for its writing, it inspired two feature films, 1998’s “The X-Files” and 2008’s “The X-Files: I Want to Believe,” neither of which were particularly well-received.

Despite the lukewarm reception that the movies received, it was confirmed in March 2015 that another season of the show would go forward, with Duchovny and Anderson on board along with the series’ creator and executive producer, Chris Carter. The tenth season of the show premiered in January, to less-than-glowing reviews, such as that of The Hollywood Reporter’s Tim Goodman, who said frankly, “It’s not very good.”