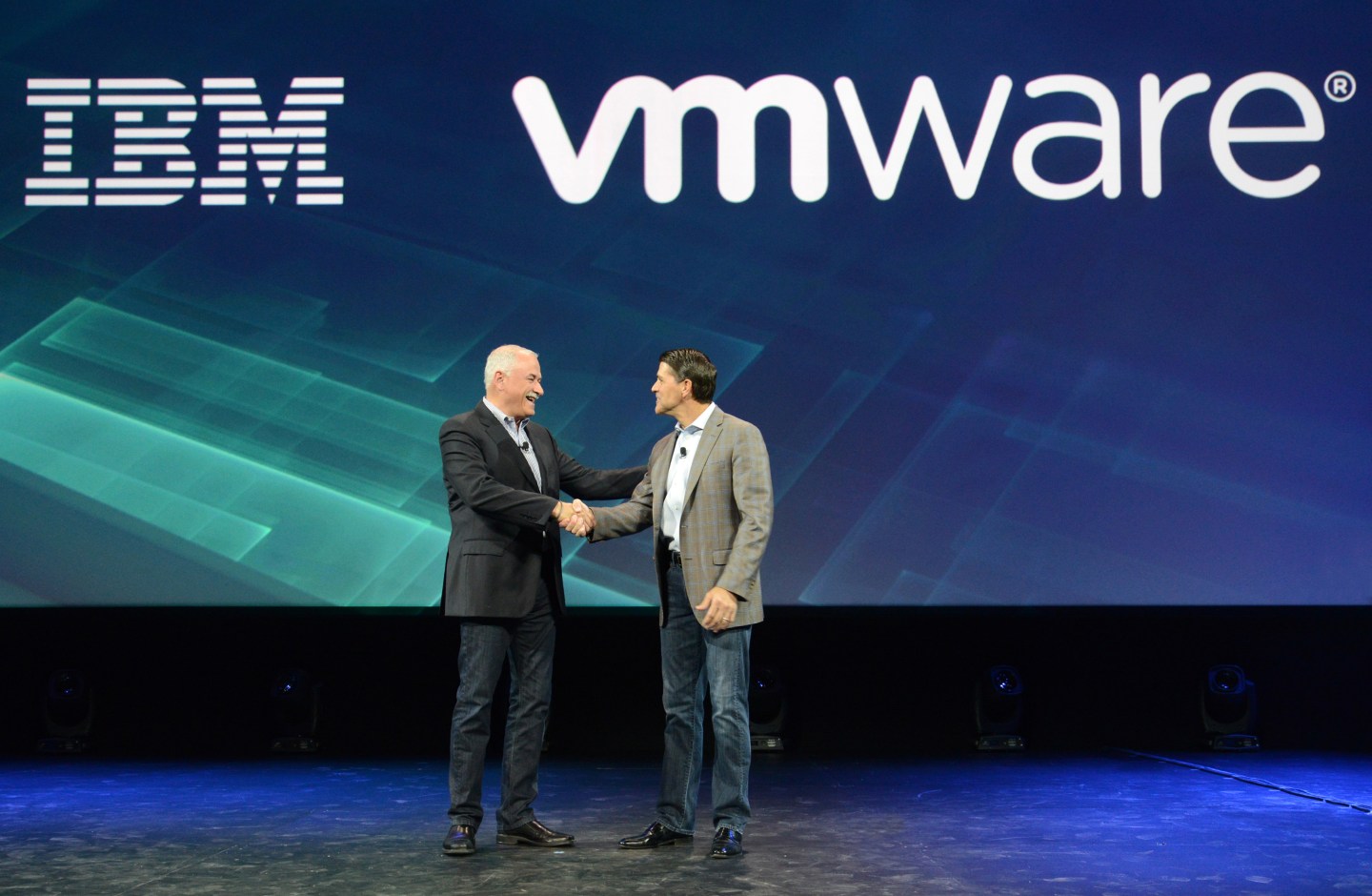 Reasonable people can argue about VMware’s future in cloud-oriented data centers, but every company with any sort of public cloud strategy wants to win over existing VMware vSphere customers. That most definitely includes IBM, which on Monday announced a partnership with VMware, that it said will make it easy for VSphere customers to launch workloads on IBM SoftLayer cloud infrastructure.

So why all this love for VMware (VMW) customers? Well, for one thing there are very, very many of them. Something like 80% of corporate customers run VSphere server virtualization in their own data centers.

Not only that, most of those customers are also looking at a way to put at least some of their data and applications into an enterprise-class cloud where they can take advantage of the flexibility and possible cost advantages that the use of shared computing, storage, and networking resources can provide.

How this Doctor is Using Amazon’s Cloud to Fight Disease:

Ironically, IBM (IBM) is proposing an easy way to launch and manage vSphere workloads in its public cloud at the IBM InterConnect conference in Las Vegas, and that proposal is pretty much what VMware vCloud Air, which launched three years ago, was supposed to do.

But VMware’s decision to narrow the focus of vCloud Air from what was once characterized as a full-on competitor to Amazon Web Services to a more niche offering is what opened up this opportunity for IBM and other cloud players. Amazon (AMZN) Web Services launched tools a few years back to enable VMware administrators to manage both VMware and AWS workloads from the same screen. Ditto Microsoft (MSFT) with Azure.

But IBM’s ambitious promise today is that it can take vSphere virtualized workloads and make them “pushbutton accessible on our cloud,” according to Jim Comfort, IBM’s chief technology officer for cloud, in an interview with Fortune prior to the launch.

“We can do that globally. If you do that with a provider here and one in Singapore we have globally connected network in 49 data
centers,” Comfort added.

Finally, Red Hat Linux Has A Home On Microsoft’s Cloud

So IBM is doing this for plain, ol’ vSphere but Comfort said it can do the same for shops running vSphere plus VMware’s NSX network virtualization technology or vSphere plus NSX plus vRealize management software. Some of these migration capabilities will be available this quarter, IBM said.

IBM is pushing the hybrid cloud message hard in that it says customers can opt to run some workloads on their own infrastructure and some in IBM’s cloud where they can manage it themselves or have IBM do it for them. They can also handle the migration themselves or retain IBM services to do it for them.

Comfort said that IBM can package and price all of this in way that’s attractive to customers. And, if the VMware shop is looking to lessenit’s reliance on VMware’s stack over time, IBM can also transition that customer to its own OpenStack-based services, Comfort said.

If Amazon, which is the leader in public cloud infrastructure—where servers, storage and networking is pooled and shared among customers—has an Achilles Heel it is its lack of a hybrid cloud story. Amazon makes it very easy to move data and applications into its cloud but not so easy to run parts of them in-house and in its own cloud. And while many big companies have put workloads in AWS, many also have reservations about going in whole hog.

For its part, VMware, also a huge proponent of hybrid cloud, is pushing the use of its NSX, vRealize , and Airwatch mobile device management across all the major public clouds, including IBM’s which is part of Monday’s news.

At its show today, IBM will also announce that Github Enterprise software repository and collaboration site will run on IBM’s Bluemix software platform; and a new “event driven” technology called OpenWhisk that looks to be a competitor to AWS’ Lambda. IBM will also demonstrate Swift, the programming language open sourced by Apple, (AAPL) running on IBM’s cloud. This is another step in the Apple-IBM collaboration to bring big-business ready applications to the iPhone.

The IBM-VMware strategic hookup was driven by the mutual self-interest by two companies who see AWS, which appears to be en route to a $10-billion-a-year cloud business, as an existential threat.