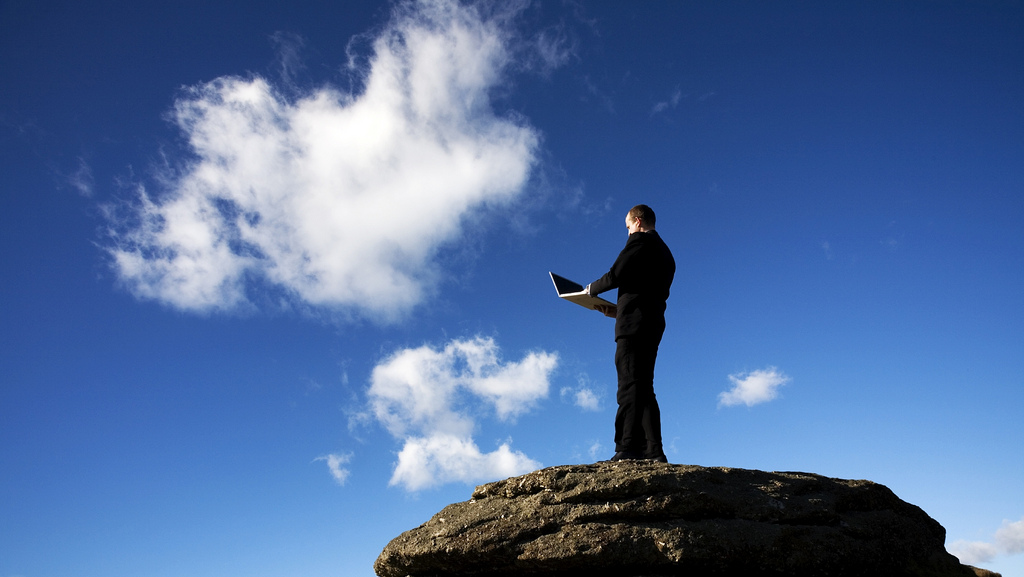 Amazon Web Services still leads the league in public cloud adoption, but Microsoft Azure is making headway, according to a new survey.

That AWS remains dominant is not shocking. But the report, by cloud management company RightScale, did show a shift in the makeup of Amazon’s customers. More big companies moved to the service, but that gain was offset as reported usage among smaller companies dropped.

As the summary of RightScale’s 2016 State of the Cloud Report, based on responses from 1,060 cloud customers, put it:

Overall, AWS is used by 57 percent of respondents, flat from last year. Enterprise adoption of AWS grew from 50 percent to 56 percent while adoption by smaller businesses fell slightly from 61 percent to 58 percent. Azure IaaS grows strongly from 12 percent to 17 percent adoption, while Azure PaaS grows from 9 percent to 13 percent.

To translate, IaaS, or infrastructure as a service, represents the nuts-and-bolts of technology—servers for computing, storage to house data, and networking to move that data around. PaaS, or platform as a service, is a set of software that gives programmers what they need to build, test, and deploy applications. In both cases these capabilities are offered on a pay-as-you-go basis and represent two subsets of the cloud computing model.

For more on Amazon’s cloud check out this Fortune video.

The fact that AWS (AMZN) gained ground among big companies in this sample is noteworthy because it casts doubt on assertions by legacy IT providers—all of whom view AWS as a threat—that big customers still don’t trust important workloads to AWS, or public cloud in general.

In the public cloud model, the provider owns and operates a huge array of servers, storage, and networking that is then shared by paying customers. Amazon jumped into this pool a decade ago and saw tremendous traction among startups and increasingly larger businesses.

That internal IT could be in the form of a traditional server closet or data center. Or it could be a private cloud, which offers some of the flexibility of the public cloud model like the ability of departments to quickly add or take down resources as needed, except that all of that infrastructure is dedicated to that company, not shared.

The combination of private clouds backstopped by public cloud is known as the hybrid cloud approach, And all of those aforementioned tech companies have latched onto it with a vengeance since they want to continue selling their software, servers, and storage to run in customers’ facilities.

It’s not at all coincidental that this hybrid capability is seen as Amazon’s Achilles’ heel. To date, Amazon’s sales pitch is pretty much for customers to send their data and applications to its cloud. There’s not much of a two-way street there.

Last fall, Amazon senior vice president Andy Jassy acknowledged—in what was seen as a pretty major concession—that, some customer applications will run in hybrid mode for quite some time because of regulatory and other issues. Since Amazon does not provide technology that runs in customers’ internal data centers or server rooms, that could be an issue.

Is Hybrid Cloud the One, True Cloud for Business?

Azure’s growth in IaaS is interesting as well since it shows Microsoft making some headway against AWS most basic services that are so wildly popular among techies.

The survey also indicated that companies adopting private cloud increased to 77% from 63% last year. And that, in turn, drove hybrid cloud adoption to 71% from 58% from last year.