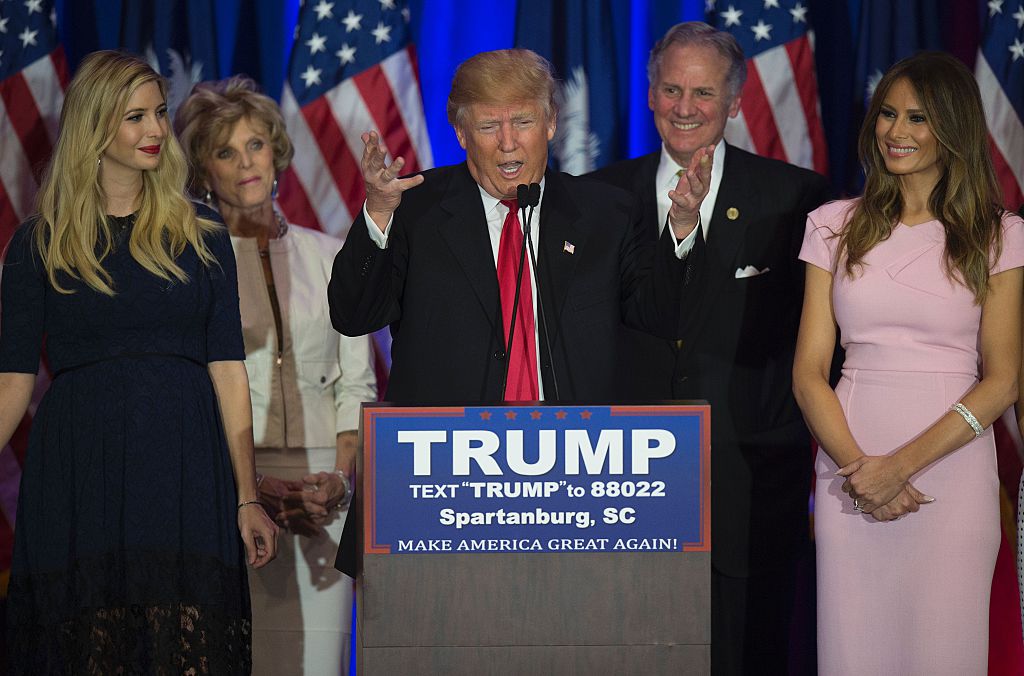 There were a lot of losers in the South Carolina Republican primary. Most of them were candidates not named Donald Trump.

Go ahead and add Apple (AAPL) to the list, too.

Trump, the runaway winner in the Palmetto State, has made his antipathy toward the electronics giant clear. His victory on Saturday came one day after he called for a boycott of Apple products on account of the company’s refusal to help the FBI crack the encrypted iPhone of one of the San Bernardino terrorists.

“Tim Cook is living in a world of the make believe,” Trump told Bloomberg on Friday. “I would come down so hard on him—you have no idea—his head would be spinning all of the way back to Silicon Valley.”

Earlier in the week, the billionaire real estate developer called Apple “disgraceful” and suggested it should be forced to comply with the federal investigation. And last month, Trump slammed Apple’s foreign manufacturing, vowing, if elected, to make the company “start building their damn computers and things in this country instead of in other countries.”

Meanwhile, the GOP field’s Apple fanboy, Jeb Bush, withdrew from the race Saturday night after a distant fourth-place finish in a state where his family claims deep roots.

Tim Cook may not be losing any sleep over the South Carolina results. Yet the early success of an Apple detractor and the collapse of its top booster is no accident.

Before Trump’s rise rewired the race, the GOP pre-primary featured a quiet scramble to build ties to Silicon Valley. Beyond a rich vein of potential campaign cash, the tech sector offered the allure of new-economy credibility.

Kentucky Sen. Rand Paul made an especially early dash for tech industry hearts and minds in 2013. That spring, at a Senate hearing aimed at shaming Apple for its tax-avoidance schemes, he rose to the company’s defense, telling Tim Cook the company deserved an apology from Congress. A week later, Paul received a hero’s welcome when he made his first visit as a senator to Silicon Valley and offered a libertarian-inflected pledge to keep Washington out of the industry’s way.

Paul’s presidential campaign never gained traction, and he withdrew earlier this month after a disappointing finish in Iowa. Ditto for Chris Christie, who dropped out after New Hampshire — but not before winning some fans among the tech elite by emphasizing his ability to forge compromise as the Republican governor of a blue state. And Bush tried to slough off the ultimately toxic notion that he was an establishment retread by referring to himself as a “disruptor,” that technospeak cliche, and in turn defending Uber and other gig economy startups against stricter labor laws.

Bush’s attempt to identify with the tech sector went beyond branding and fundraising. The candidate also embraced the industry’s policy imperatives: advocating a switch to a territorial tax system (while also preserving the research and development credit); backing the Common Core education standards; and defending comprehensive immigration reform despite an anti-immigrant revolt by the base. The positions helped form the spine of a wonky program that Bush, with evident pride, hoped would channel conservative instincts into a modern governing vision.

But touting tech’s priorities and its pricey gadgets turned out to be a bad look at a time when many voters sense the technological revolution is responsible for their insecurity. Trump has fueled his candidacy by exploiting that fear. Explicit in his strongman appeal is the promise that, through sheer force of will, he can reverse the tides of globalization to restore a long-gone economic order. Indeed, it’s right there in his pledge to bring Apple’s manufacturing back to the U.S. — no matter that it’s a pledge he cannot possibly fulfill.

The hopes of conservative techies won’t die with Bush’s candidacy. Florida Sen. Marco Rubio — the field’s Bush 2.0, who scored a surprise second-place finish in South Carolina as his mentor sunk — has arguably gone further than any of his competitors to associate himself with the sector. He devoted a chapter in his book to how regulations should make room for Uber. Over the last two years, he’s delivered a series of speeches to tech audiences to articulate his industry-friendly program. And he’s earned valuable support in return, including a recent $1 million check from Oracle founder Larry Ellison for a super PAC supporting his bid.

Rubio is emerging from South Carolina renewed in his status as the establishment’s last, best hope to stop Trump and Texas Sen. Ted Cruz. True to form, in the encryption debate, he’s offering a position much friendlier to Apple and the tech giants that have rallied to its defense. But Rubio has also shown himself more willing than Bush to accommodate himself to the populist anger convulsing the electorate. If he smashes his iPhone at a campaign rally, Cook can start worrying.