Here’s the Next Battle Over Airwaves Brewing in Washington 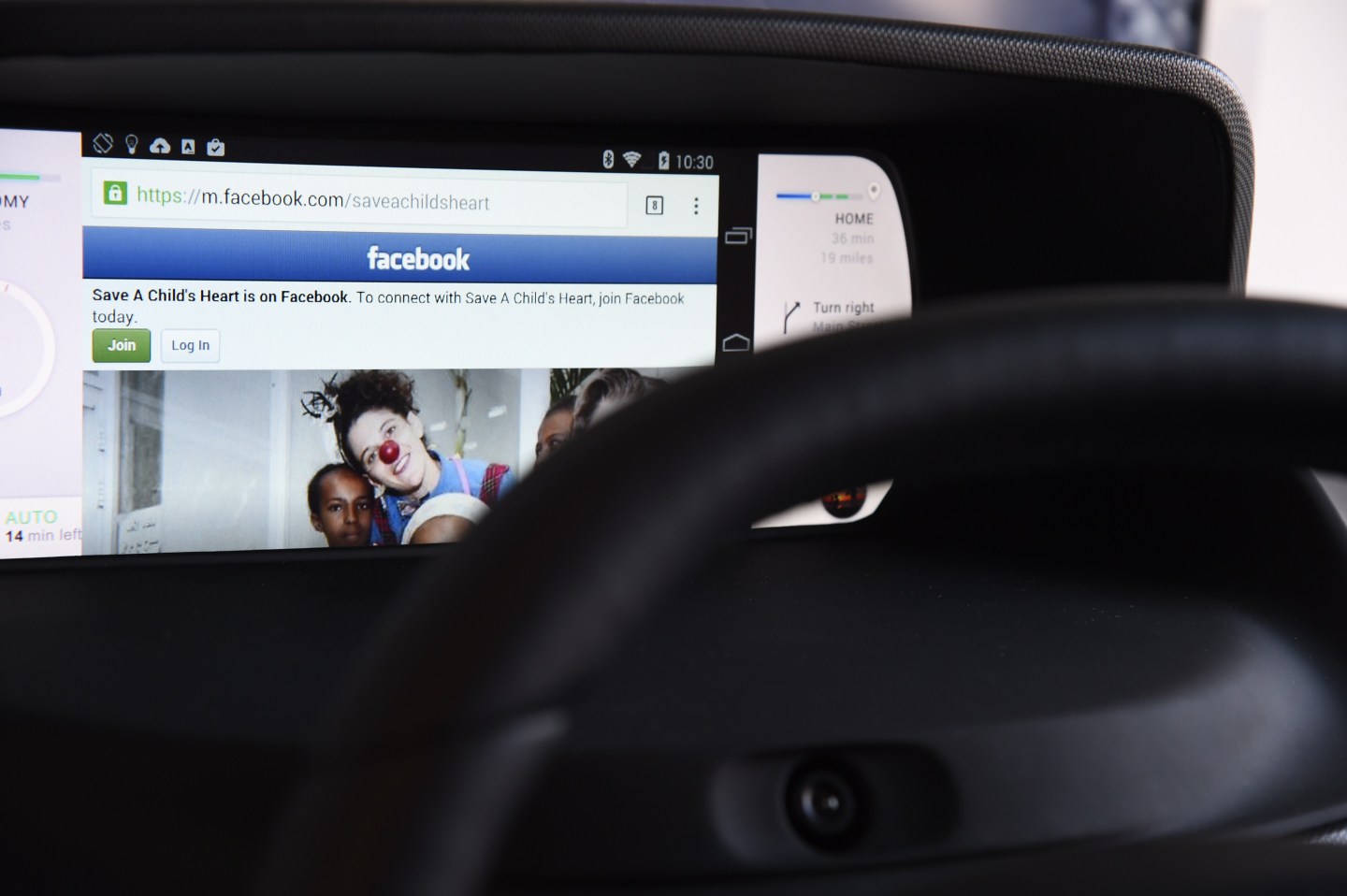 Facebook from a wirelessly connected smartphone is seen on the mockup display of Valeo's Mobi/us autonomous dashboard, a concept for interacting with a self-driving car as well as with one's smartphone, January 6, 2015 at the Consumer Electronics Show in Las Vegas, Nevada. When the car is driving in autopilot mode the driver can watch movies or surf the web on his wirelessly connected smartphone. Depending on the linked smartphone, either Chromecast, Miracast or Apple's AirPlay can be used to wirelessly display and operate the smartdevice. Mobi/us also allows the driver to switch between traditional driving and automonous driving and monitors the driver's hands and eyes to determine that the driver is ready to drive the car manually when instructed by Mobi/us to do so. AFP PHOTO / ROBYN BECK (Photo credit should read ROBYN BECK/AFP/Getty Images)
Photograph by Robyn Beck AFP/Getty Images

Big companies like AT&T and Google along with upstarts like Starry, which is hoping to provide wireless gigabit broadband service to homes, are using airwaves that have long been thought of as undesirable.

And with the Federal Communications Commission trying to complete rules for the spectrum by summer, a band of radio waves that once languished is about to become the focus of the next big fight in telecommunications.

Historically, the so-called millimeter band of radio spectrum has been too difficult to use. But now, as the need for mobile broadband accelerates—and as improvements in the technology make the millimeter band more accessible—big-name companies including Google (GOOG), Microsoft (MSFT), Cisco (CSCO), and AT&T (T) are fighting for a say in how the FCC allocates those airwaves.

Last week, Cisco’s estimated that data traffic traveling over cellular networks would increase 57% globally from 2014 to 2019 to 24.2 petabytes a month. A petabyte is a million gigabytes, or roughly equivalent to 13 years of HD video. All of that data that will travel over some form of radio spectrum.

The most recent big mobile broadband spectrum auction was in 2015, which netted the U.S. government $44.9 billion. While any millimeter auction is unlikely to generate such big bids, it would still be a major money-maker.

Unlike spectrum that sits lower in the frequency range, millimeter spectrum doesn’t travel through walls. It requires a more power wireless signals can’t travel as far, which means the towers that hold the bulky equipment that transmit the signals must be closer together. Building a network is therefore more expensive.

Which means, until recently, the complexities of using this band of airwaves has limited its use to satellites and science projects. Not businesses.

That has changed in part because of our hunger for spectrum, but also because of research in new types of antennas and radios that solve some of the past problems. However, it’s still unlikely that this band would be used for a traditional cellular network.

But AT&T has filed an application to test equipment in Austin, Tex. that would use some of it. The company has been vocal about using millimeter wave technology in the last few years for dense, small cell networks in urban areas to provide more capacity for its cellular networks. Google too, has applied for experimental license in the millimeter wave bands, thought to be for its Project Loon efforts to provide broadband access to rural areas or drone research.

In fact, it is the broadband capability that Starry, a startup by Chet Kanojia, the founder of former on-demand TV startup Aereo, is hoping to use to deliver gigabit broadband to homes as well. By placing transmitters on telephone poles and cell towers in densely packed urban areas and using the millimeter band, operators can transmit huge amounts of data for relatively short distances without the antennas being within the line of sight of another as was previously necessary.

For more about the FCC and AT&T, watch:

AT&T declined to comment about its experimental millimeter wave application. It would only provide a vague statement that said: “AT&T has applied for an experimental license to test a variety of new wireless equipment. As these trials are on-going, we expect to have more information to share in the future.”

AT&T is also one of over more than 100 companies that responded to a FCC request for input in October about how it should regulate some of the millimeter wave spectrum. The initial comment period ended last week, and companies have until Feb. 23 to reply to the comments already on file.

From there the FCC can issue a notice of proposed rule-making to issue formal rules. But it is more likely to schedule workshops and try to reconcile the inevitable conflicting perspectives before setting the rules this summer.

The FCC must decide several big issues including what part of the spectrum to make available in the auction. Commenters in the process differ, with some wanting more of the bands to be made available than are currently on the docket.

Other decisions include whether to make the bands licensed or unlicensed. There is always pressure from carriers and their backers to make more of the airwaves leased to one provider as opposed to opening them to everyone to use for Wi-Fi and Bluetooth.

Deciding whether the U.S. wants to follow along with the international community or go our own way will be another issue the FCC must weigh. In general, trying to link U.S. spectrum policy with global spectrum policy means that companies can sell the same devices both in the U.S. and abroad without worrying about differing radio compatibility.

Another issue for the FCC to decide is the size of the channels in each band to make available. The wider the channel the “faster” your potential broadband speed. For example, AT&T’s would like to see 200 MHz channels, but in some bands, the current channel width is set at 50 MHz. That lets more people participate in the spectrum auction because there are more channels available, but it does mean they might not be able to deliver speeds that are as fast.

Our thirst for live streaming video, Facebook, self-driving cars and other mobile applications are continuing to drive demand for more capacity on mobile networks. Spectrum that has traditionally been too difficult will gain increasing importance in meeting our broadband needs for some time to come. Soon, we’ll be using millimeter wave. But tomorrow we may head even further up the spectrum chart—into the terahertz band.