How to Play Video Games and Win College Tuition 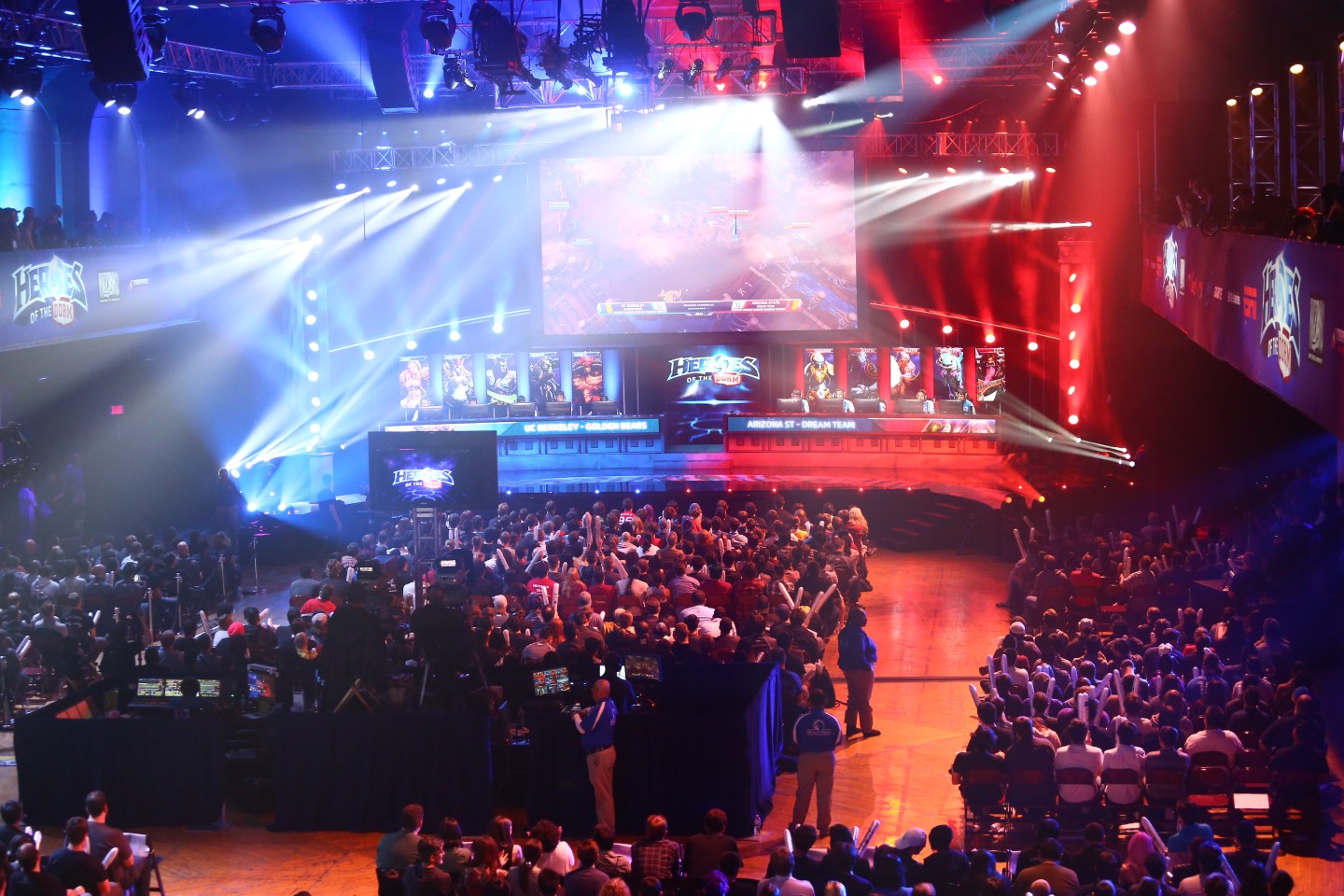 There are a few schools out there that actually offer partial scholarships for eSports, but now any college student can play his or her way into tuition money. Blizzard Entertainment is giving away $650,000 in college tuition money this year as prizes for its popular eSports games Hearthstone, StarCraft II, and Heroes of the Storm.

Blizzard, which is a division of Activision Blizzard (ATVI), just awarded $100,000 in scholarship money to the top players in the Collegiate Hearthstone Championship. Ohio State University won the tournament, which featured 1,024 teams. And the game maker has a $50,000 prize pool for its upcoming StarCraft II Archon tournament, which begins Feb. 8. Hundreds of players have signed up for that college challenge.

But the most popular college eSports title—and the best way for kids to turn gaming skills into scholarship tuition—is the multiplayer online battle arena (MOBA) game Heroes of the Storm.

Adam Rosen, Blizzard’s project manager for eSports for the “Heroes of the Dorm” tournament, says the company wasn’t sure what to expect for last year’s inaugural competition, which pitted college teams against each other over the course of a season.

“We were overwhelmed by the response—889 teams from across the U.S. and Canada participated,” Rosen says. “This year, we’ve already seen hundreds of teams sign up within the first few days of open registration.”

ESPN2 televised last year’s initial tournament Grand Finals between undefeated University of California, Berkeley and Arizona State University in Los Angeles’ Shrine Auditorium. Ratings were so good that ESPN is bringing it back to broadcast this year.

“After watching the tournament play out the way it did, it solidified my belief in the potential for eSports,” says John Lasker, vice president of programming and acquisitions for ESPN Digital Media. “That response and attention also said a lot to us about the Blizzard brand in that they had a clear ability to not only release great, entertaining gaming titles, but also put on a first-class event deserving of national TV distribution.”

While college football and basketball rivalries aren’t going to be replaced any time soon, that same school allegiance has already translated to eSports—at least with “Heroes of the Dorm.” After the tournament, ASU tweeted the date of the upcoming football game against Pac-12 rival UC Berkeley, vowing revenge for their “Dorm” loss. (Berkeley would go on to win that game 48-46.)

“We’ll have more opportunities to showcase more rivalries in ‘Heroes of the Dorm’ this year,” Rosen says. Rounds 64 through 8 will all be broadcast on ESPN3, Twitch, and YouTube, and the “Heroic Four” plus the Grand Finals will air on two nights on ESPN2.

This being college eSports, many of the players from last year’s tournament have graduated. That opens slots for fresh gamers to step into the competition.

Upping the ante this year is more college tuition money for players. This year’s tournament offers more than $500,000 in tuition and other prizes, including a $10,000 prize to the winner of Blizzard’s bracket challenge. When the Grand Finals conclude, and the 2016 “Heroes of the Dorm” champion is crowned, each player on the winning team will walk away with up to $75,000 in tuition.

“These competitors and teams are uniquely skilled and talented,” Lasker says. “In that respect, it’s no different than how we would look at a talented basketball player or team. The best of the skilled and talented work hard to develop their mental and physical abilities to perform at the highest level of competition. Also, Heroes of the Storm is a team competition. It requires strategy, leadership, and teamwork to be successful. In this regard, there are a lot of parallels to traditional and popular college and pro sports.”

For more on the changing landscape of higher education, watch:

“ESports leagues, and tournaments like ‘Heroes of the Dorm,’ present young gamers who might have grown up playing Blizzard games with rewarding opportunities similar to those found in traditional athletics,” Rosen says. “What’s particularly cool about eSports is that you can see players go from just having fun playing a game like Heroes of the Storm or Hearthstone against their friends or others online, to consistently doing well enough in that game to contend in tournaments, and from there their eSports careers can really take off.”

And just like traditional sports, college eSports players can graduate to professional leagues across these titles, and more. And they also get their 15 minutes of fame, or longer, on networks like ESPN and Turner Broadcasting, which is launching ELeague this year with a TBS broadcast component.

Those days of parents telling their kids to quit playing video games because they’re wasting their time are over. Now those kids could be practicing for a scholarship.