Why ESPN Is Investing in ESports Coverage 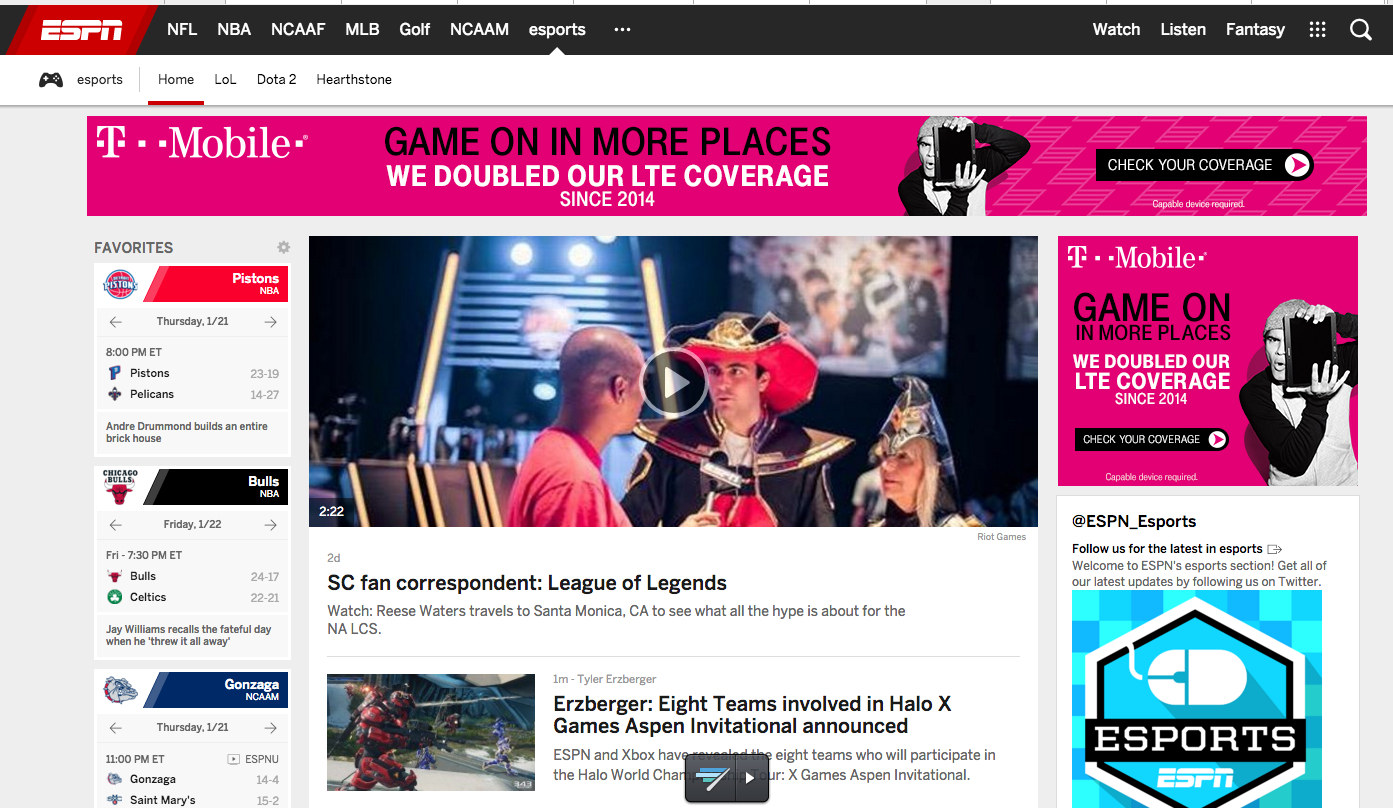 After dabbling with livestreaming, television, and print coverage of eSports, ESPN has launched a new online vertical covering the world of competitive gaming. It’s yet another step toward mainstream acceptance of professional video gaming.

After all, if the self-proclaimed “worldwide leader in sports” is covering top games such as League of Legends, Dota 2, and Counter-Strike: Global Offensive alongside the NFL, NBA, and MLB, eSports and sports will be sharing the same pages for the first time.

“We saw how responsive the fan base was, how tremendous the storytelling opportunities were and, for those of us not already immersed in the industry, how similar it was from a competitive standpoint to what we already cover,” Millman says. “It didn’t seem like that much of a stretch then to get aggressive about creating a digital destination.”

ESPN, a division of Disney (DIS), hired an editor and two reporters from within the eSports community to cover the games, teams, pro players, and breaking news from across the industry.

The eSports industry will grow from $278 million in revenue in 2015 into a $765 million industry by 2018, according to forecasts from research firm Newzoo.

T-Mobile (TMUS) has come in as a sponsor for the eSports section on ESPN.com. And ESPN is cross-promoting eSports through its sponsored “Bank of America Fan Correspondent” segment, which this week covered the opening weekend of the League of Legends Championship Series at Riot Games in Los Angeles.

“We will be doing multiple pieces of content on a daily basis, from text pieces to videos to highlights from events to podcasts,” Millman says.

For more on Riot Games, watch:

The addition of eSports coverage fits within the framework of sports reporting, he says.

“There are so many similarities between eSports and what we traditionally think of as mainstream, stick-and-ball sports,” Millman says. “The intensity level of the competition, the intrigue amongst the ownership groups, the following eSports has. All of it allowed for us to play in a space that is comfortable for us as far as reporting, specifically telling stories about these various disciplines, covering the events and breaking news.”

And the site has already connected with eSports fans. Its new @ESPN_Esports Twitter handle has over 56,000 followers. Millman says a recent story about League of Legends player Lee Sang-hyeok, who’s known as “Faker,” received over 1 million page views.

“It wasn’t just the eSports community that responded and commented on that piece, it was a wide swath of readers and consumers of ESPN,” Millman says. “On the site we have pages that are dedicated to explaining the intricacies of different games, but the more we can share the personalities and drama of the sport, the more we’ll engage an audience that didn’t know much about it before.”

This expansion into a new market comes on the heels of approximately 300 companywide layoffs last October and the closure of the Grantland.com site. But ESPN has been experimenting with eSports coverage over the past few years in various forms.

ESPN3 carried live coverage of BlizzCon and the International Dota 2 Championships over the past two years, as well as the 2014 League of Legends tournament. The network also delivered exclusive live coverage of “Heroes of the Dorm,” with the final airing live on ESPN2—the first live, televised coverage of a collegiate eSports event for ESPN. Over the past few years the X Games have awarded medals for the top Counter-Strike: Global Offensive and Call of Duty pro gamers through a partnership with Major League Gaming (MLG), with coverage across ESPN.

Microsoft (MSFT) is working with ESPN on a Halo 5: Guardians tournament at X Games Aspen at the end of January.