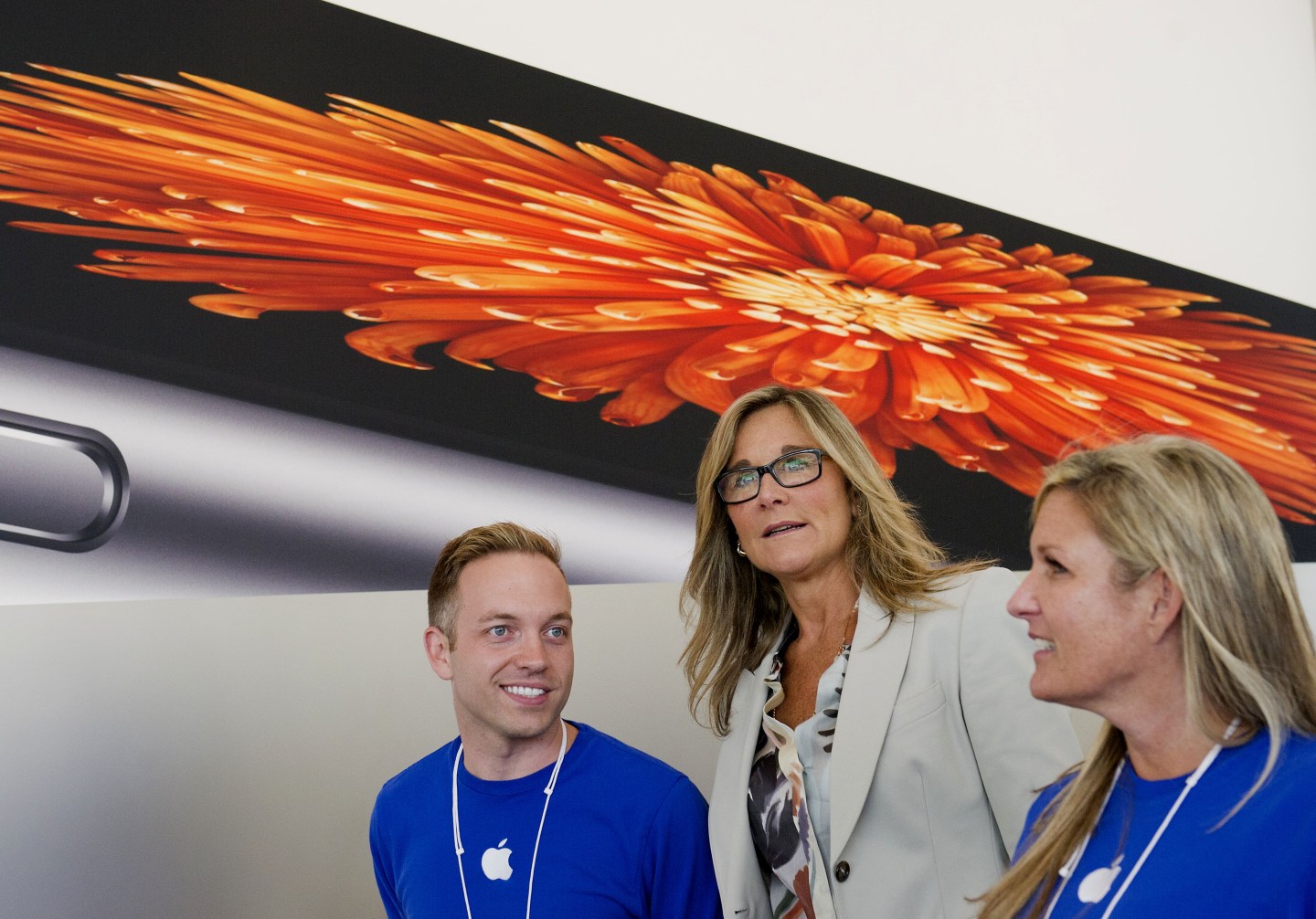 Angela Ahrendts, senior vice president of retail and online stores at Apple Inc., center, tours an Apple Inc. store during the sales launch for the iPhone 6 and iPhone 6 Plus in Palo Alto, California, U.S., on Friday, Sept. 19, 2014. Apple Inc.'s stores attracted long lines of shoppers for the debut of the latest iPhones, indicating healthy demand for the bigger-screen smartphones. The larger iPhone 6 Plus is already selling out at some stores across the U.S. Photographer: David Paul Morris/Bloomberg via Getty Images
Photograph by David Paul Morris — Bloomberg via Getty Images

Apple retail chief Angela Ahrendts knows what it takes to keep her employees happy: Treat them like the “executives” they are.

Speaking to Fast Company in an interview published on Thursday, Ahrendts, who serves as Apple’s senior vice president of retail and online stores, said that the iPhone maker ended 2015 with its highest-ever employee-retention rate: 81%. She said she believes Apple (AAPL) has been able to keep employees happy because they’re treated with respect.

“They don’t feel like they’re just somebody over here working with customers,” Ahrendts said. “I don’t see them as retail employees. I see them as executives in the company who are touching the customers with the products that Jony [Ive] and the team took years to build. Somebody has to deliver it to the customer in a wonderful way.”

Ahrendts, who joined Apple in 2014 after leaving her post as CEO of luxury fashion company Burberry, has approximately 60,000 employees under her command who are strewn across the world in approximately 460 retail stores. She’s also in charge of the company’s online retail store.

Over the last several years, Apple’s retail stores have become the framework by which all other retail stores are judged. The retail stores are open and bright, allowing consumers to see and use the products before they buy. Apple stores also have a Genius Bar, where employees are available to handle problems with iPhones, Macs, and other Apple products. And Apple has built up a retail force that has been commended by countless retail companies as well-educated and friendly. The Apple Store experience is widely viewed as tops in retail.

Ahrendts didn’t create that atmosphere, but inherited it. The late Apple co-founder Steve Jobs was instrumental in creating the retail experience customers now have in Apple stores, and former retail chief and J.C. Penney CEO Ron Johnson helped to expand upon that. Ahrendts, however, has been widely viewed by analysts and fellow executives as the key person to improve upon a formula that has worked for well over a decade.

In an exclusive interview with Fortune last year, Ahrendts said that she spent her first six months on the job evaluating how the Apple retail stores were operating and tried to understand employees. She told Fortune that her focus wasn’t on the product, but rather the people that will ultimately make contact with the customers. Apple’s retail retention rate has gone up under Ahrendts, and she’s single-handedly bucked industry trends by nixing special deals on big holiday shopping days, like Black Friday, to save her employees from the stress.

For more, read: What the heck is Angela Ahrendts doing at Apple?

Ahrendts brings a new and important culture to Apple’s retail stores, but that doesn’t necessarily mean that it always works. By her own admission, Apple has an employee attrition rate of 19%, which, while low, is something the company wants to improve upon. And Ahrendts and Apple CEO Tim Cook told Fortune last year that they both would like to attack diversity issues in technology.

“If we’re able to provide teaching to large groups, particularly underrepresented groups, then we can move the dial in a major way,” Cook said. He added that a retail store could be the ideal place to launch such an experiment.

Still, while Ahrendts wants to believe Apple’s retail store employees are “executives,” there’s one issue: They’re not really executives. Ahrendts earned $73.4 million in stock and cash in her first year at the company and made over $25 million in compensation last year. Apple’s employees make a far, far cry from that.

For more about Angela Ahrendts, watch:

However, Ahrendts told Fortune that “there’s not a retailer in the world that pays what we pay to service customers.”

But as Ahrendts argues in her interview with Fast Company, money isn’t ultimately the deciding factor for becoming an Apple employee. Indeed, she argues that employees have the ability to “feel connected” to something bigger, to “one Apple.”

“The culture is so strong,” she said. “The pride, the protection, the values.”