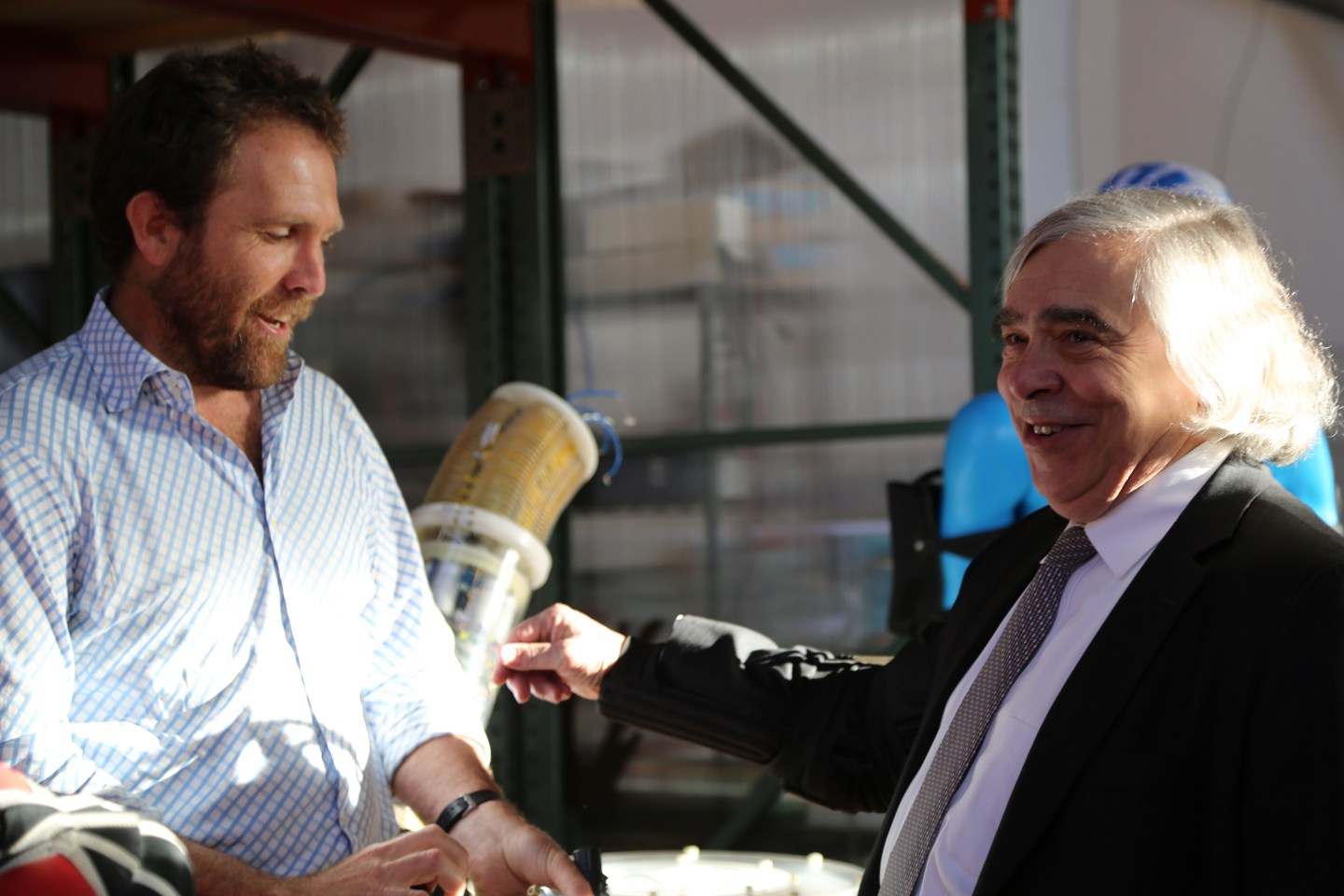 Inside a converted factory, down a back alley in San Francisco’s Mission District, U.S. Energy Secretary Ernest Moniz tries on a robotic arm that uses fabric and air to give the wearer super muscles. While being strapped in by the founder of the lab that created the arm, Moniz breaks into a wry grin, well aware of the coordinated photo opp he’s just stepped into.

Thanks partly to an ability to deflate tense situations, Moniz was instrumental in helping negotiate the landmark Iran nuclear deal as well as the first-of-its-kind Paris Climate agreement. Combined with his signature founding fathers hairdo, he’s emerged as a bona fide cabinet celebrity in recent years.

Late Tuesday afternoon, the Secretary arrived at the headquarters of Otherlab, a research and development shop meets Silicon Valley incubator, to check out the futuristic projects inside and meet the ambitious entrepreneurs who lead them. A handful of Otherlab teams have received grants from the Energy Department’s ARPA-E program, which funds early stage, high risk projects focused on innovation in energy.

At the start of the tour, Moniz told the lab’s founder, Saul Griffith, that he was there to see “neat stuff.” What he saw was a new type of solar tracker, temperature-changing fabric, a desktop milling machine, and a natural gas tank shaped like an intestine.”

In an interview with Fortune after the tour, Moniz explained ARPA-E as “quite a different way of doing business for the government, and you see the other end of it here.” The grants are typically in the range of hundreds of thousands of dollars to a couple millions dollars and are dispersed to dozens of teams all over the country.

Moniz, a nuclear physicist and MIT professor, has always been supportive of energy tech innovation and research, but in recent months has seemed to make it one of his signature issues. He told Fortune: “I can assure you that when the administration budget is proposed we will certainly honor to seek a doubling of [energy] R&D.”

He’s referring to a pledge by a group of 20 countries, announced at the beginning of the Paris talks in December, to double national and state energy budgets for research and development. That move, combined with the news that Bill Gates and a group of fellow billionaire investors would increase investments in early stage energy technology, almost stole the show in Paris.

The U.S. currently spends roughly $5 billion on energy R&D. Moniz is trying to convince Congress to bump that up to $10 billion over the next five years. To get that done, he might need to bring that robot arm to the Hill. With President Obama’s final term near its end and a Republican controlled Congress, long-term big spending initiatives could be a tough sell.

However, it’s energy innovation that Moniz sees as crucial to keeping countries on track to meet increasingly ambitious greenhouse gas reduction goals. The Paris agreement has been lauded as an important first step, but it won’t stop the world from warming more than two degrees.

To keep reducing emissions, Moniz says energy innovation will be particularly important to help lower the cost of cleaner energy technology like solar, batteries, and ways to capture carbon emissions from coal plants. Energy tech development, which can help drive business and jobs, is also the rare climate change issue that is bi-partisan in Congress, notes Moniz later during an onstage interview at the Commonwealth Club on Tuesday night.

Energy technology development can also be independent of volatile oil prices, Moniz told Fortune, “because we’re talking about a much longer time horizon.” Oil prices have plummeted over 70% since last Summer, and fell below $30 for the first time in 12 years recently. Moniz emphasized, “We’re in this for the long term.”

A recent Bloomberg New Energy Finance report found that investors poured a record $330 billion in clean energy in 2015, including wind and solar projects, despite the plunge in oil prices. Because oil dominates transportation, it has little direct effect on the power generation industries.

But Moniz also said that the rock bottom oil prices of late have clearly had a short term impact on certain sectors like slowing electric car sales and the deployment of next-generation biofuels. But he said there’s no reason to think oil prices will stay so low for long.

He seems to take an unusually long-term view of the world, despite the fleeting nature of both politics and Silicon Valley—the two worlds he straddled on Tuesday. Some of the ideas and startups that cycle through Otherlab could be gone before Moniz leaves office when the new administration takes over in 2017.

When it comes to nuclear power in the U.S., he tells Fortune that the big decisions will be somewhere between 7 to 10 years out. That’s when many of the nuclear plants that were built in the ’70s and ’80s will need to start to be replaced. Utilities will have to start deciding which new nuclear technology to use, or not use. “That’s 100 gigawatts of capacity and zero carbon capacity,” Moniz said.

When it comes to other technologies, Moniz sees change happening much more quickly. Self-driving cars “are coming at us much faster than expected,” Moniz said at the Commonwealth Club while noting that they could open the door to electric vehicles and new more efficient urban design.

Will we see Moniz spending more time with Bay Area’s tech community as his tenure is rounding down? Well, this summer, he plans to help bring together a meeting of the Clean Energy Ministerial in San Francisco, where global leaders of clean energy will discuss the future, and 1,000 clean energy technologies will be showcased.

The conference and the emphasis on energy tech innovation will help push the world to meet the commitments in Paris, said Moniz. It’s no coincidence that it’s being held in the world’s tech and innovation capital.