Box Gets Cozier With Microsoft 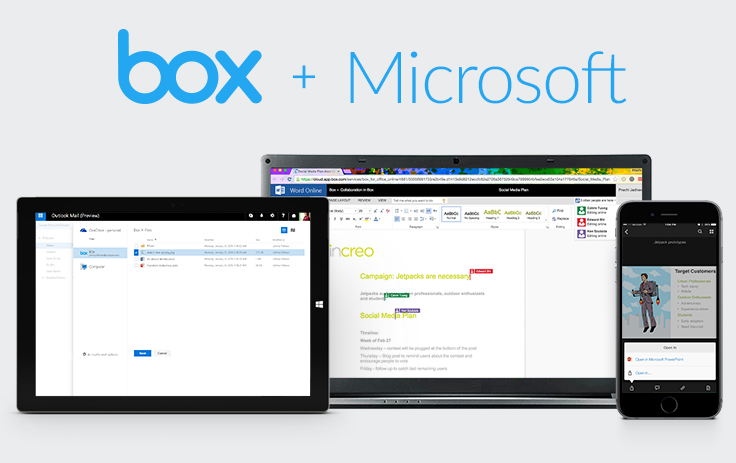 If you scour the customer account lists for Box (BOX) and Microsoft (MSFT), you’ll find plenty of overlap—one reason that the two companies started working together about 12 months ago.

This week, the companies are getting even more serious about that partnership. Their goal: Make it tougher for business users to tell where Microsoft’s productivity applications stop, and Box’s file-sharing service begins. “We think this is pretty indicative of what enterprise software is going to look like,” Box co-founder and CEO Aaron Levie told Fortune. “Customers have been clamoring for this.”

Box counts on partnerships with big companies such as AT&T (T) , IBM (IBM), Microsoft, and Salesforce (CRM) to give it more credibility with businesses. From a technical standpoint, the Microsoft alliance requires substantial resources, Levie said, with developer teams from both companies sharing ideas and software code proactively.

So far, that collaboration has taken the form of application software updates from both companies. This week, however, Box and Microsoft are introducing several significant new features that demonstrate an even deeper commitment. They include a feature for Office Online that automatically saves changes made to Word, Excel, and PowerPoint documents to the Box cloud storage service. Additionally, Outlook.com has been integrated in a way that makes it simpler for users to attach a document stored on the Box service to an email message.

“We want customers to be able to mix and match in whatever way they want,” Levie said.

Box and Microsoft have stopped short of selling products together, Levie said. That’s the major way in which this partnership differs from Box’s 10-year commitment to IBM. (The IBM-Box sales arrangement could bear fruit during Box’s current quarter, which ends Jan. 31. As of its latest earnings call, there were 100 potential deals in the pipeline.)

Box currently has about 54,000 paying customers, including huge corporate accounts such as Eli Lilly, General Electric, and Flextronics.