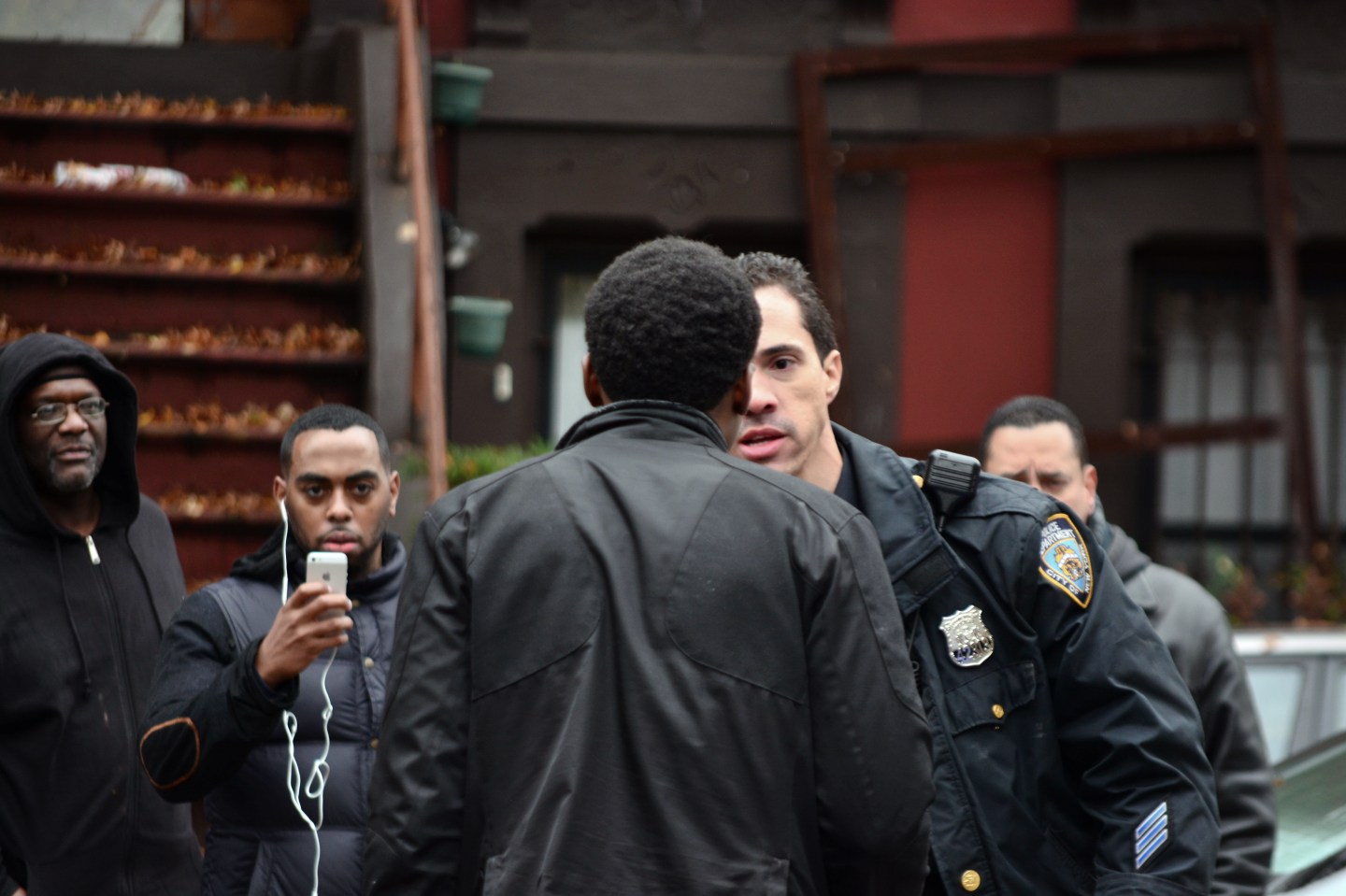 With tensions still flaring across the United States after a series of caught-on-camera police violence against citizens and attacks against law enforcement officials, a new virtual reality film offers users multiple perspectives of a traffic stop gone bad.

Perspective: The Misdemeanor, which premiered at the Sundance Film Festival’s New Frontiers exhibit this weekend, tells the story of a routine traffic stop of two black men by two white cops. Using Samsung’s (SSNLF) Gear VR headset, viewers see the same scenario from four different perspectives (the two officers and the two men they stopped). Each perspective lasts about five minutes, offering a 20-minute story that can be viewed in any order.

Morris May, founder and CEO of Specular Theory studio, and director Rose Troche collaborated on this second project in the series, which uses 360-degree cameras to put the viewer into the roles of the characters from a first-person perspective. They debuted the first chapter, Perspective: The Party, at Sundance last year and took on another timely topic: college date rape. Viewers used Facebook’s (FB) Oculus Rift to watch the incident from the perspectives of a male college student and a female college student.

This year, Troche says there has been so much going on with police violence that they wanted to illustrate what happens you enter a situation where there are biases on both sides.

“What was really saddening to me is that it seems like such a polarizing topic for so many people that has developed into an ‘us or them’ mentality,” Troche says. “The mentality is so black and white, when there are many gray areas. I wanted to try to change the conversation—even if it’s ever so slightly—so that we talk about that gray area.”

To see which films were hottest in 2015, watch:

May says virtual reality is the ultimate empathy machine and the possibilities are endless.

“Imagine being able to be anyone, doing anything,” May says. “No one even knows what the creative possibilities are at this point. People don’t usually have empathy for someone they see getting shot on TV, but when you are actually placed in the first person point of view of a boy seeing your own brother get shot right in front of you—that is impactful.”

Before writing the script and filming the action, Troche conducted interviews with young people of color and with a number of police officers to understand how each side feels about the topic.

“Often, the police officers are truly fearful for their life, and that perspective gets lost in the media most of the time,” Troche says. “Everyone is pointing fingers and it isn’t doing anything to push the dialogue to make these things better.”

With virtual reality technology advancing so rapidly, even last year’s The Party was already dated by the time it debuted at Sundance. It had been shot for the first version of the Oculus Rift developer kit, but the industry had moved on to the second version.

May says his team has been designing new technology with each project. For The Misdemeanor, they created 360-degree cameras that attached to each actor’s head. In postproduction, the perspective was digitally lowered so the viewer sees the events at eye level.

They also used Dolby (DLB) Atmos to create directional sound that allows viewers to hear all around them, which is the first time this technology has been used in virtual reality. May says one thing they learned from working on these films is that sound is crucial to storytelling in virtual reality.

Even with Skybound Entertainment distributing its episodic film, Gone, on Samsung Gear VR and over 30 virtual reality experiences at Sundance this year (up from a dozen last year), it’s still very early days for storytelling in this new medium.

“There still are not that many filmmakers that have access to the technology or the skill set that is required for VR, so while there is a growing volume of the experiences, the quality isn’t rising as quickly at this time due to the steep learning curve involved with the medium,” May says.

Of course, that will change. Facebook launched its own Oculus Story Studio at Sundance last year, which has released a pair of computer-generated virtual reality shorts. And Sony(SNE), HTC(HTC), and other big companies are investing in virtual reality storytelling, in addition to video games and other experiences.