Friday’s Oil Rally Is A Thing of The Past 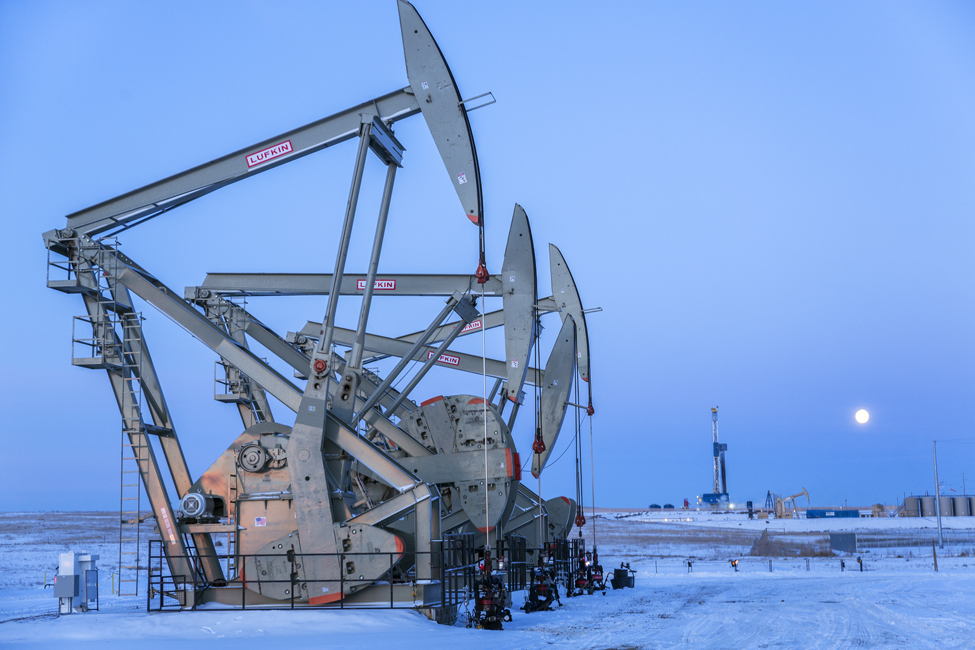 New pump jacks bringing up sweet crude oil from the Bakken shale deposits in the Williston Basin, some ten miles north of Williston, ND. This drilling pad is on the Smith Farm, and is managed by Statoil.
Photograph by George Steinmetz for Fortune Magazine

Remember the great crude rally of Jan. 21? Ah yes, those were the days. Or rather, that was the day.

The oil bears were back out in force again on Monday after Iraq said oil output had reached a record high in December, adding to the overhang of supply in the global market and wiping out much of the gain made in one of the biggest-ever daily rallies last week.

Fields in central and southern Iraq produced as much as 4.13 million barrels a day, the government said, sending prices down as much as 4% as traders put on fresh negative bets.

“The news that Iraq has probably hit another record builds on the oversupply sentiment,” said Hans van Cleef, senior energy economist at ABN Amro in Amsterdam.

Elsewhere, the chairman of Saudi Aramco, the state-owned giant that produces nearly 10% of world output, said that his company hadn’t reduced investment despite the collapse in prices to their lowest levels in over 12 years.

“I’ve continued to encourage fiscal discipline in my role as chairman of Aramco,” Bloomberg quoted him as saying. “In our investments capacity, oil and gas has not slowed down.”

Khalid Al-Falih had triggered Friday’s rally with comments at the World Economic Forum that prices below $30 a barrel were “illogical”–but traders had chosen to ignore Al-Falih’s omission of any concrete steps to limit oversupply.

Mohammed el-Badri, secretary general of the Organization of the Petroleum Exporting Countries, said in a speech in London Monday that: “It is crucial that all major producers sit down to come up with a solution.”

However, there seems little chance of that in the near term. Indonesia’s top bureaucrat to OPEC said support among the organization for taking steps to prop up prices is slim, with only one member country supporting an emergency meeting over the matter.

The damage inflicted by low prices on producing nations is becoming more evident by the day. Earlier Monday, Russia confirmed that its economy shrunk by 3.7% last year, overwhelmingly due to the fall in oil prices.

The Russian government gets over half of its tax revenues from the oil and gas sectors, which also generate over three quarters of the country’s export revenues. Falling export revenues, combined with $56 billion in net capital outflows over the last year, drove the ruble to record low of nearly 85 against the dollar last week. It had rebounded on Friday in parallel with oil, but was down over 1.2% at 79.13 by 0530 ET.

UPDATE: This articles has been updated to include extracts from Mohammed el-Badri’s speech.