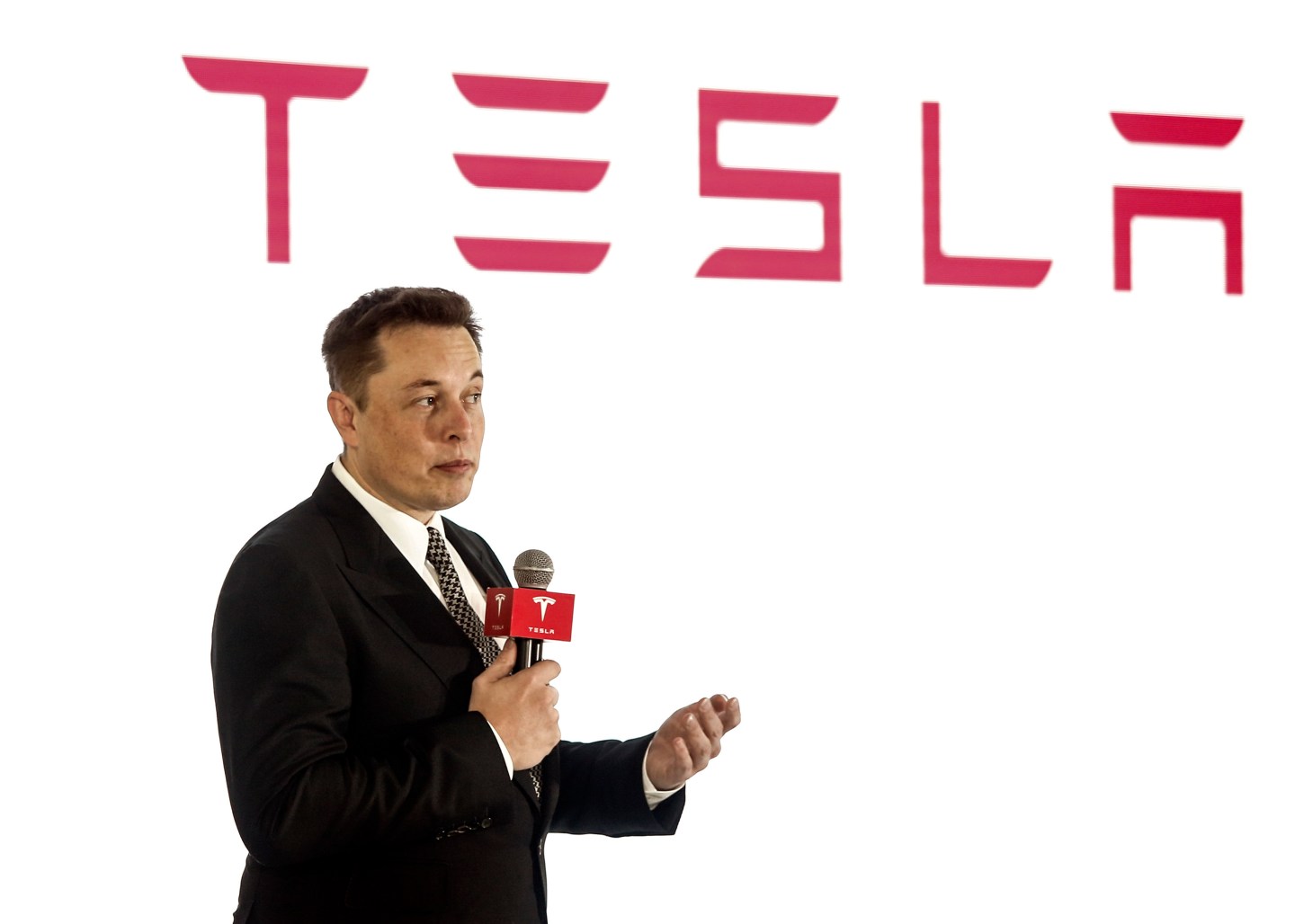 BEIJING, CHINA - OCTOBER 23: (CHINA OUT) Elon Musk, Chairman, CEO and Product Architect of Tesla Motors, addresses a press conference to declare that the Tesla Motors releases v7.0 System in China on a limited basis for its Model S, which will enable self-driving features such as Autosteer for a select group of beta testers on October 23, 2015 in Beijing, China. The v7.0 system includes Autosteer, a new Autopilot feature. While it's not absolutely self-driving and the driver still need to hold the steering wheel and be mindful of road conditions and surrounding traffic when using Autosteer. When set to the new Autosteer mode, graphics on the driver's display will show the path the Model S is following, post the current speed limit and indicate if a car is in front of the Tesla. (Photo by ChinaFotoPress)***_***
Photograph by ChinaFotoPress/Getty Images

Electric vehicle sales have already slowed as oil prices have dropped nearly a third in the past 12 months. The average price for regular has fallen from $2.74 per gallon in June to $1.85 a gallon as of Monday, according to the U.S. Energy Information Administration.

But Musk argued that Tesla’s luxury, higher-priced electric vehicles will better withstand the effect of cheap oil prices than its lower-priced rivals. Musk didn’t elaborate, but the assumption is that consumers of his high-priced luxury cars—they start at $70,000 before incentives—aren’t buying them just for fuel savings.

Automakers that produce models that come in gas or electric will be hardest hit, Musk predicted. Under that scenario, consumers have no compelling economic reason to pick the electric vehicle over the gas-powered one.

Major automakers such as Ford and General Motors (GM) are adding more plug-in hybrid and all-electric cars to their portfolio. And while, electric vehicle sales may slow, it’s not exactly hurting their bottom line.

GM delivered a 8% more vehicles in 2015 than the year prior largely because of the high demand for SUVs, crossovers, and trucks. A similar story played out at Ford (F).

“Overall low gas prices are good for our business” because pickups are a big part of Ford’s business, Ford CEO Mark Fields said during a Fortune Brainstorm Tech event in January. However, he did add an important caveat: Consumers know that gas prices will eventually rise, so Ford’s aim is to have the best fuel economy in every segment it’s in.

Unlike Tesla, which is a pure all-electric business, major automakers are investing in both fuel sources, some more heavily than others. GM, Ford, Volvo, and now Volkswagen have all made public commitments and investments in developing electric vehicles.

GM CEO Mary Barra unveiled the new Chevrolet Bolt EV at CES, the annual consumer electronics trade show held in Las Vegas in early January. By this time next year, the hatchback will be in full production and sitting in showrooms across the U.S. Audi introduced its first all-electric car, the A3 Sportback e-tron, to U.S. markets this year and has plans to produce an all-electric SUV by 2018.

For more on Elon Musk’s views on fossil fuels:

Cheap oil has already forced the Obama Administration to reexamine its electric vehicle goals. U.S. Energy Secretary Ernest Moniz said Thursday that sales of electric vehicles in the United States may not top one million until 2020, in part due to low gas prices.

President Barack Obama set a goal in 2008—when gas prices hovered round $4 a gallon and he was still just a candidate—to have one million plug-in electric vehicles on the roads by 2015. He repeated that goal during his 2011 State of the Union address. But only 400,000 electric vehicles have been sold in the U.S. to date.