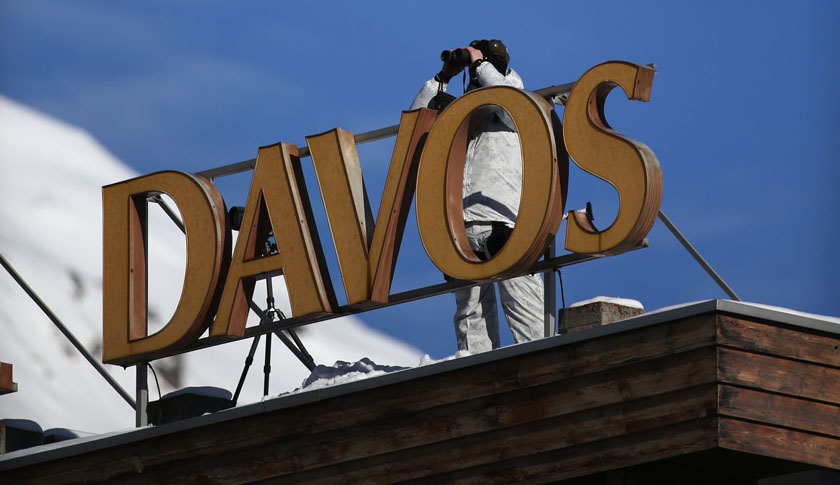 A member of the Swiss Police force uses binoculars to look out across the town from the rooftop of Hotel Davos during security operations ahead of the World Economic Forum (WEF) in Davos, Switzerland, on Tuesday, Jan. 20, 2015. This week World leaders, influential executives, bankers and policy makers will attend the 45th annual meeting of the World Economic Forum in Davos that runs from Jan. 21-24. Photographer: Simon Dawson/Bloomberg via Getty Images
Photograph by Simon Dawson — Bloomberg via Getty Images

After three days of hyper-networking at the World Economic Forum in Davos, a few common themes have emerged. I offer four of them here with a disclaimer: What happens in Davos isn’t always fully connected with what’s happening in the rest of the world.

The markets are not predicting recession. Among the CEOs here, there is little evidence of panic. Most believe the economy will slow in 2016, particularly in China, but they aren’t bracing for a full-blown global recession, and they certainly don’t see anything comparable to 2008.

The European Union is in trouble, not for economic reasons, but due to concerns about migration and security. A British exit from the European Union is now rated as a 50-50 possibility, and other countries could well follow. Angela Merkel, who was named by our sister publication TIME as person of the year in 2015, is seen as an endangered species in 2016.

Digital transformation is as much about people as technology. I moderated two private CEO-level discussions focused on the digital transformation of industries, and in both, the human challenges trumped technological ones. Companies struggle to create cultures that can embrace rapid technological change, and governments struggle in response to publics more likely to focus on future risks than future benefits.

Transformation is big business. The Swiss shops that normally line the main street in Davos have been temporarily eradicated in favor of networking lounges offering comfortable seating, free wi-fi, good coffee, and giant signs promoting the companies that want to power the Fourth Industrial Revolution. Accenture’s occupies nearly half a block; Flex and Infosys the same. Salesforce has storefronts on both sides of the street. Data-miner Palantir has constructed its own building, as has Facebook. Snow boot and chocolate stores are no longer easy to find.

Also today, we are releasing a story from February’s Fortune magazine about the significant challenges faced by black men in the executive suite. You can read it here.