At Davos, Companies Use Lingerie Boutiques and Hairdressers to Woo Global Elite 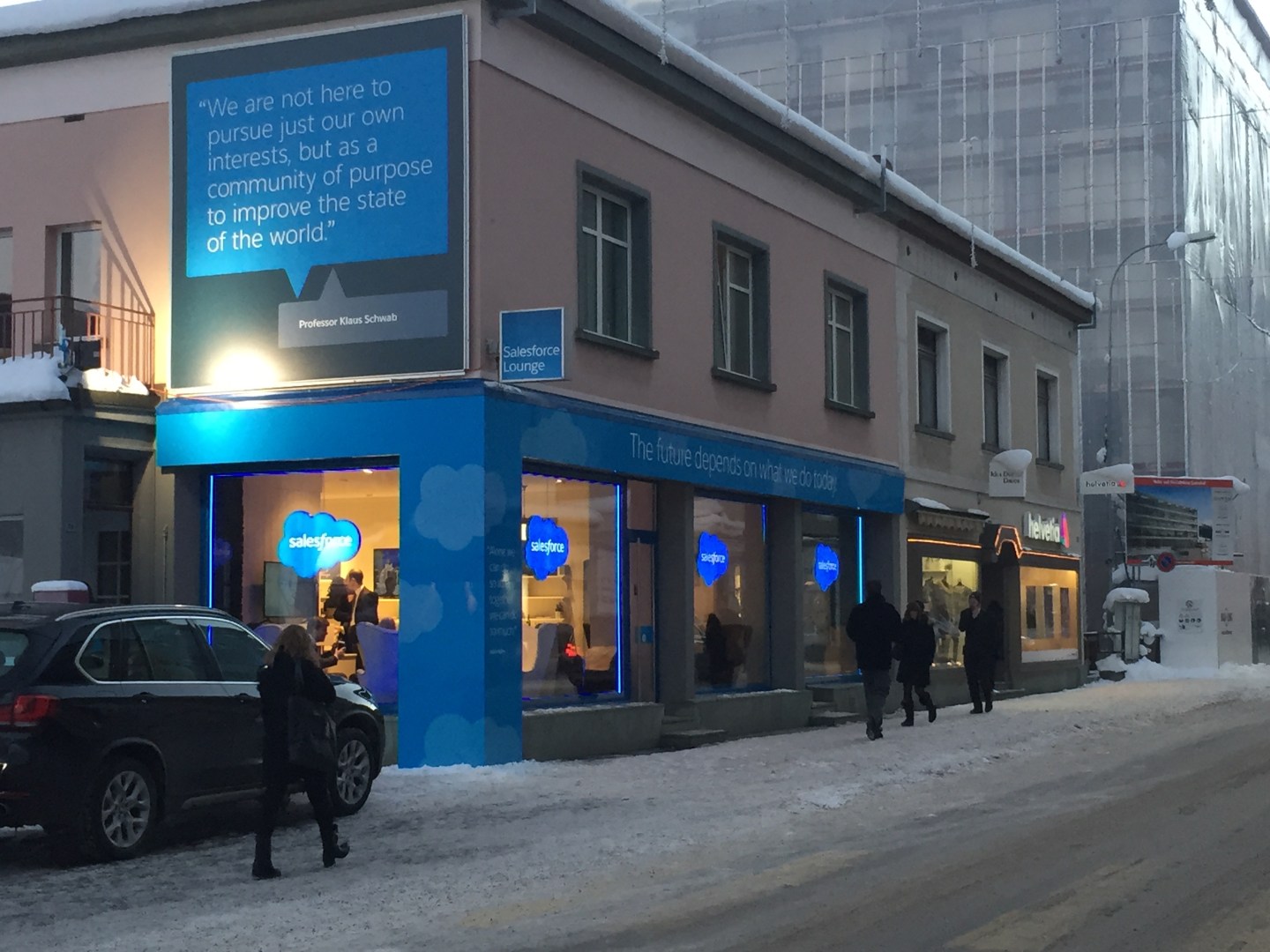 At the World Economic Forum, Salesforce is using a lingerie boutique to market itself to the global elite gathered in Davos, Switzerland this week.

Where bras, underwear, and pajamas are usually on display, there are computers, local kids, inspirational sayings, and a coffee bar. In the windows hang neon versions of the enterprise software company’s blue logo, and a big blue sign over the door.

Salesforce has rented out the underwear store, along with a book store across the street, for the week. There’s no way to tell that the 500 square foot store usually sells underwear. On Thursday, Salesforce was using the converted space to teach local kids how to program, an initiative it has started with CoderDojo, a non-profit that teaches kids about technology. Next week, the bras come back.

Salesforce is not the only company with a Davos pop-up. Up and down the main commercial street in Davos, the Swiss Alp town that hosts the annual confab for CEOs, politicians, and top policy makers, companies have rented out retail space, replacing the local shops and turning the typically quiet ski village into a marketing destination for some of the world’s largest companies. Gone are the usual cuckoo clock stores.

More than 2,500 people participate in the World Economic Forum. Thousands of others head to Davos for the week for meetings, parties, and to network. The stores line the route from the confab’s main conference center to the morning and evening events, which are held at restaurants, hotels, and, increasingly, the pop-up stores.

Among those who have rented out stores and converted them are Microsoft, Accenture, and Infosys, among others. Palantir, the secretive data mining startup that has achieved unicorn status, built its own temporary building, with its name in big letters and a modern wood-paneled exterior. Facebook also put up its own building, a glass house. A number of companies, including Mastercard and SAP, have rented meeting space in a converted hairdresser shop.

Most of the corporate pop-ups have cafes. But some of the conference’s more exclusive meetings take place in back rooms at the converted retail spaces. On Wednesday morning at the Microsoft Cafe, Vice President Joe Biden met nearly 20 CEOs and top executives, including Coca-Cola’s Muhtar Kent and Dow Chemical’s Andrew Liveris. The meeting was a roundtable on lesbian, gay, bisexual, and transgender rights sponsored by Human Rights Campaign and hedge fund firm SkyBridge Capital, as well as Microsoft.

The World Economic Forum started more than 40 years ago. It was originally a conference for small German business owners. But it has since become an annual must-attend event for the world’s most powerful business people and policy makers, and it has come to dominate the town of Davos. Companies have long rented out meeting space in the city’s main hotels, including the Steingerberg Grandhotel Belvédère, which hosts many of the event’s biggest parties. The pop-ups stores are a recent addition.

Marc Honicke, who owns local realty Colmac, says he rented out the first retail space to a corporation looking for meeting space in 2004. He says it was a financial services firm, but won’t say which one. The first year, the retail space was used as private office space. The next year, the company rebranded the front of the store. Others soon followed suit. You would think the retailers of this normally quiet ski town wouldn’t want to vacate their space during a week when thousands of visitors come to town. But Honicke says World Economic Forum attendees tend to spend most of their time hobnobbing, and very little time shopping. “You know how much most retailers that stay open make during the WEF?” says Honicke. “Nothing.”

Honicke won’t quote prices. But others said the cost to rent the stores for the week runs from $25,000 to as much as $500,000. And that’s just the rent. Companies also have to pay to clear out the stores and redesign them for the week, as well as put everything back in place when they are done. (Full Disclosure: Time Inc. has rented out a storefront for the week, with logos of Time and Fortune in the windows.)

Infosys, the technology outsourcing firm based in India, has rented out a 900 square-foot furniture store for the week. During the day, the space houses a restaurant, meeting space, virtual reality headsets, and a robot arm that serves beer. Infosys hosts nightly parties in the space, including one with over 300 people on the invite list. There is also a morning panel on artificial intelligence. “We wanted to show off that we are about technology and more than just outsourcing,” says Infosys executive vice president Rajesh Murthy.

Salesforce is one of the few companies that has two spaces. On the second day of the World Economic Forum, the company used the space to host local children and teach them about computers. The children were working on computers, building and programing circuit boards that can test moisture levels in plants. The company recently gave $200,000 to CoderDojo, a non-profit that goes around the world teaching children about coding. “The World Economic Forum comes to these kids’ backyard and they typically have no interaction with it,” says Suzanne DiBianca, who is the head of salesforce.org, the company’s philanthropic arm. “We think this is very much in keeping with the mission of WEF to make the world a better place.”