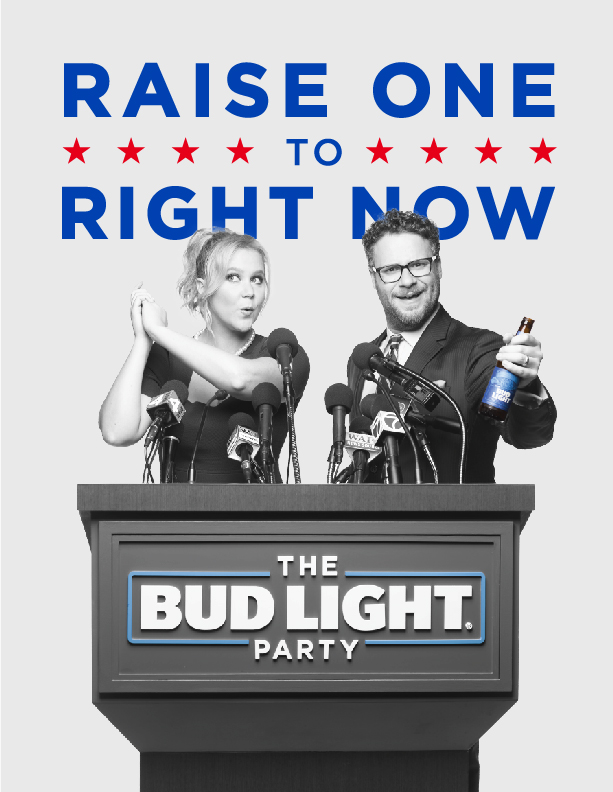 There is a new, independent political party that is launching in 2016: the Bud Light Party.

Anheuser-Busch InBev (BUD) on Friday unveiled a new campaign that will feature comedians Amy Schumer and Seth Rogen in a political-themed ad it is calling “Raise One to Right Now.” The ad will kick off during Super Bowl 50 and will run throughout most of the year. Comedian Michael Peña will also appear in later ad spots.

“We’ve done a lot of culturally relevant campaigns, but the election to my knowledge is not something we’ve ever leveraged,” Bud Light vice president Alexander Lambrecht told Fortune. “We are excited about the Bud Light Party as a platform”

The quirky campaign will debut in a 60-second ad. It is part of Anheuser-Busch InBev’s broader Super Bowl ad strategy, which also includes separate advertisements for sibling brands Budweiser, Michelob Ultra and Shock Top. For Michelob, it is the first Super Bowl ad since 2010 while for Shock Top, it is the first ad AB InBev has ever commissioned for the big game.

AB InBev has been a Super Bowl advertiser since 1975 and has been the exclusive alcoholic-beverage partner for 28 consecutive years. It has committed to buying three and a half minutes in ad time, the same amount as last year. At an estimated $5 million cost for a 30-second ad, the cost to AB InBev could be as much as $17.5 million.

With that investment comes a lot of attention. The average audience last year was around 114.4 million viewers, making it the most watched broadcast in U.S. TV history.

A potentially favorable response to the ad campaign could help the brand reporter stronger sales. Bud Light’s sales to retailers have slipped the past two quarters, as it and other major beer brands face volume challenges as consumers are lured to Mexican beers like Corona, craft competitors, and the wine and spirits categories. Still, Bud Light by far remains the most popular beer in the U.S.

Lambrecht said the tone of the ad campaign is light and won’t be politically charged in any way.

“We’re beer, we are supposed to be fun,” says Lambrecht. Some of the print ad spots that Fortune was shown included “The new candidate” and “I back the Bud Light Party.”

The campaign will also help sell consumers on Bud Light’s new packaging, which it debuted late last year and will begin to appear on retail shelves by April.