For Ted Cruz and Chris Christie, Their Wives Are Their ‘Secret Weapon’ 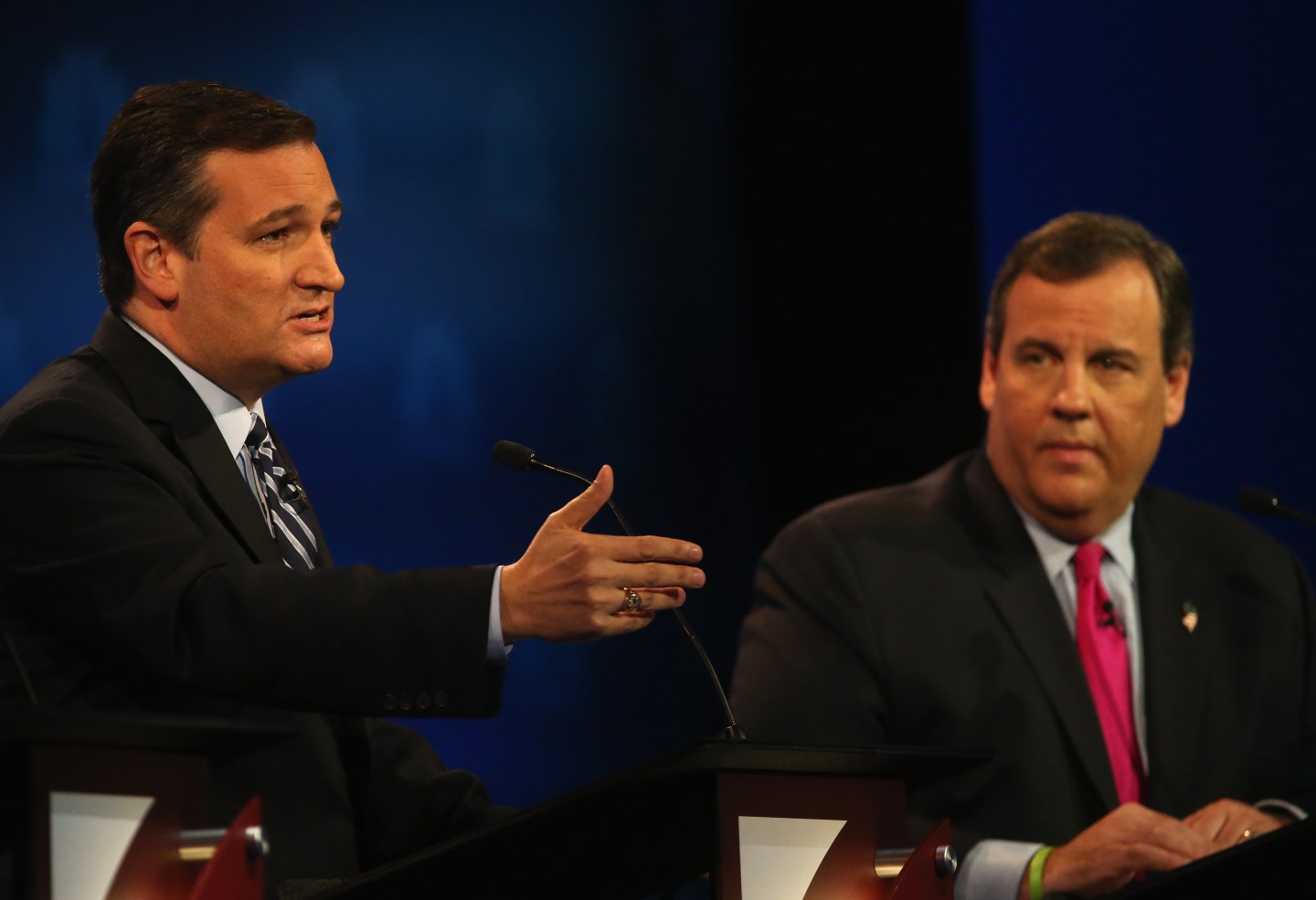 Politics is a business—a big one. And every presidential campaign needs a business model – a multi-year plan that lays out the source of revenues (fundraising), capital expenditures (signs, haircuts), and marketing budgets (advertising). And for the business-minded, campaigns can fall into recognizable buckets: Barack Obama in 2008 was the crowd-funded, social media-fueled disruptive start-up. Mitt Romney in 2012 was the self-funded private equity baron who depended on big money establishment investors. And so on.

But every presidential candidate must also have a personal business model. That is to say, she (or he) must pursue a career and financial path that sets the candidate up with the right mix of professional experience – public and private sector – and personal assets. Elective politics may not exclusively be a rich person’s game. But most people who pursue politics are well-off, or aspire to be. And so they have to arrange their affairs so that they can pursue power while maintaining the type of lifestyle that well-educated executives and their children have come to expect. And, here, too, the campaigns fall into recognizable buckets.

In this campaign season, the dozen-odd serious candidates present an array of choices. In a series of articles, Fortune will explore these personal business models used by the candidates. In our first, we explore what might be called the “Wives of Wall Street” model, used by New Jersey Governor Chris Christie and Texas Senator Ted Cruz.

This was the model pioneered by Bill Clinton in Arkansas in the 1980s: high-achieving, yuppie lawyer on the make makes his mark in politics and public service while highly credentialed spouse makes bank in the banking sector. The female bread-winner allows the husband to spend his prime working years in office, and running for ever-higher office. They can be public servants while living like one percenters.

After graduating from Seton Hall University School of Law in 1987, Chris Christie got involved in New Jersey politics and worked as a lawyer and lobbyist. He shifted into the public sector in 2002, when he was appointed U.S. Attorney for New Jersey. And has remained there ever since: he quit the post in late 2008 to run for Governor, and was elected in 2009. His public-sector salaries have been decent by American standards–U.S. Attorneys can make about $150,000 annually. And his salary as Governor is a maximum of $175,000. But by New Jersey yuppie standards, that’s not very much. Especially if you foreswear living in the free governor’s mansion, Drumthwacket, and prefer to live in a 7,000-foot McMansion in Mendham, New Jersey. (It has a Zillow Zestimate of $2.377 million.) And it’s especially tough to make it on a meager Governor’s salary when you have four kids, including two in private universities (son, Andrew is at Princeton, daughter Sarah at Notre Dame) and send the other ones to private schools.

The First Lady of New Jersey is also a player on Wall Street. A graduate of the University of Delaware, she holds an MBA from Seton Hall University and has worked as a bond trader at Cantor, Fitzgerald. In 2012, she joined Angelo Gordon & Co., the giant hedge fund and private equity complex.

How much does she make?

Ted Cruz attended Princeton University and graduated from Harvard Law in 1995. In the 20 years since graduating from law school, he has worked as a lawyer in private practice for about five of them and been on a federal or state payroll the rest of the time. He clerked for two years: for appeals judge Michael Luttig and then Supreme Court Justice William Rehnquist.

After a cup of coffee at law firm Cooper, Carvin & Rosenthal, he joined George W. Bush’s successful 2000 campaign, and held posts in the Justice Department and the Federal Trade Commission. He moved to Texas in 2003, where he served as the state’s Solicitor General through 2008. (The current salary of the solicitor general of Texas is $151,000.)

So how does a family of four – Cruz has two daughters – maintain residences in both the Houston and Washington, DC area on less than $200,000? Especially when the family cashed in its personal holdings of about $1 million to fund what was then a quixotic Senate campaign in 2012?

Heidi Cruz met her husband when they both worked on the Bush campaign. A graduate of Claremont-McKenna College, she has an MBA from Harvard Business School. When the couple moved back to Texas, she joined Goldman, Sachs as a private wealth manager in 2005. (That’s what used to be known in the old days as a stockbroker.)

How much does she make? By Wall Street standards, her earnings at Goldman were merely good. On the Cruz’s joint tax return from 2010, it appears her salary was around $360,000. Cruz hasn’t released his 2013 or 2014 tax returns. His personal disclosure form has a line for salary for Heidi Cruz from Goldman Sachs, but doesn’t say what it is. But it is likely substantially higher. According to her LinkedIn profile, Heidi Cruz in 2013 was promoted to managing director—the final step on the ladder before becoming partner. According to Glassdoor.com, the typical managing director at Goldman has base salary of about $376,000 and total compensation –including bonus and stock – of about $600,000 per year.

Beyond the cash and security such a perch provides, Sen. Cruz has benefitted from other perks that Wall Street players get – like cheap and ready access to loans. This week the New York Times reported that the couple helped self-fund Ted Cruz’s 2012 campaign in part by taking up to $500,000 in loans from Goldman Sachs, Heidi’s employer.

In the weeks to come, Fortune will explore the other models used by the presidential candidates.