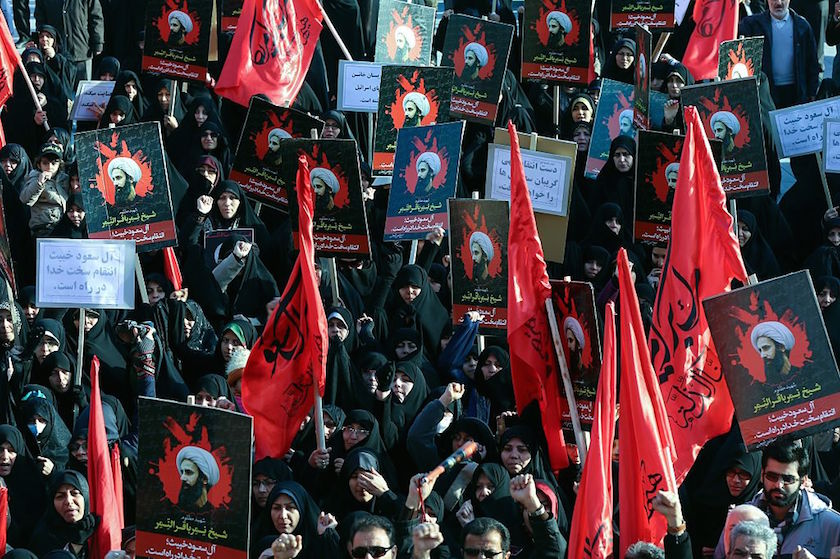 Increased tensions between Saudi Arabia and Iran shouldn’t be interpreted as a bullish signal for world crude prices. While things may look ugly at the moment, with both sides recalling their ambassadors and turning up the hostile rhetoric, neither side is truly willing to risk disrupting the flow of oil out of the Persian Gulf. To do so would not only be politically foolish, it would be economically ruinous for both nations.

The oil markets started 2016 with a bang, with the price of Brent crude, the international oil benchmark, gaining as much as 3.3% on Monday. Traders attributed the bullish move to a diplomatic crisis that broke over the weekend between Iran and Saudi Arabia, which seems to be getting more complicated by the hour.

On Saturday, Saudi officials announced it had executed 47 prisoners. Among those beheaded was Sheikh Nimr Baqir al-Nimr, a Saudi national and a Shia Muslim cleric who had strong ties with the Shia establishment in Iran. He was arrested and sentenced to death last year for his participation in the 2011 protests against the Saudi government. Sheikh Nimr called for better treatment for the nation’s Shia minority, which has been marginalized for years by the majority Sunni population in Saudi Arabia.

The execution of a Shia spiritual leader by the Saudis upset the Shia Muslim theocracy in Tehran. Nimr had spent some 10 years in Iran studying under the tutelage of Persian scholars and had developed respect for the Islamic Republic during his time there. When he returned to his homeland, he began to openly criticize the Sunni Muslim ruling Saud family, calling for more autonomy for the nation’s Shia minority, which is located mostly in the nation’s eastern province, which also just happens to be where the bulk of the nation’s oil fields are located.

Dissent of any kind in Saudi Arabia is frowned upon by the ruling Saud family and is usually dealt with a swift chop to the neck. Among the 47 executed over the weekend, most were Sunni Muslim extremists who belonged to the Al-Qaeda terrorist machine, which aims to overthrow the house of Saud. There was little sympathy for those militants, many of which had murdered innocent people, including a freelance cameraman on an assignment for the BBC, Simon Cumbers, back in 2004.

But Nimr and the six other Shia men executed for their participation in the largely peaceful 2011 protests drew condemnation from human rights groups, many of which saw the execution as a largely political move by the Saudi government.

“The death sentence against Sheikh Nimr Baqir al-Nimr is part of a campaign by the authorities in Saudi Arabia to crush all dissent, including those defending the rights of the Kingdom’s Shia Muslim community,” Amnesty International officials said in a statement on Saturday. “The killing of Sheikh Nimr al-Nimr in particular suggests they [the Saudi government] are also using the death penalty in the name of counter-terror to settle scores and crush dissidents.”

On Saturday night, Iranian hard-liners reacted to the news of the death of Sheikh Nimr by storming and torching the Saudi embassy in Tehran. The embassy was vacant at the time of the attack, and no diplomats were hurt or taken hostage. But there was considerable damage done to the building.

Storming embassies is an old trick used by the Islamic Republic to settle scores with foreign governments. They did it to the U.S. embassy back in 1979, when the Carter administration refused to deport the Shah back into the clutches of the Islamic revolutionaries. It also happened at the British embassy in 2011, when the UK government banned all financial institutions in the United Kingdom from doing business with their counterparts in Iran.

In response to Saturday’s attack on the Saudi embassy, the Saudi government announced Sunday that it was severing all diplomatic ties with Tehran. On Monday, the government stepped up its rhetoric, announcing that it would also suspend all air traffic and all trade with the Islamic Republic until it starts to act like a “normal nation.”

There is now growing concern among oil traders that tensions between the two OPEC producers could quickly turn into a military confrontation, leading to a major disruption to world oil supplies. But while both sides are sure to hurl lots of insults and sanctions at one another in the coming days, neither seems ready to go to war—at least not yet. The sanctions imposed by Saudi Arabia are mostly symbolic. There are no commercial air links between Iran and Saudi Arabia and trade between the two nations is almost nonexistent, as they are both primarily oil exporters.

To be sure, relations between the Saudis and the Iranians have never been especially cordial, but they have become significantly worse since the hawkish King Salman bin Abdulaziz al-Saud ascended the throne of Saudi Arabia in January 2015. He is determined to halt the spread of Iranian influence throughout the Middle East and is willing to use force, if necessary. Over the past year, Saudi troops have engaged in a ruthless bombing campaign against Iran’s proxies in Yemen and have armed rebels fighting against government Iran’s allies in the Syrian civil war.

But fighting via proxy is far different than fighting directly with your adversary. Saudi Arabia may have the latest and greatest weaponry from U.S. military contractors, like Lockheed Martin and Boeing, but they are still wary of engaging in a direct fight with their much larger neighbor. Sure, they will bomb rebels in Yemen who don’t have an air force and crush unarmed Shia protesters in Bahrain, but they aren’t ready to actually fight an adversary who could actually fight back.

While the hard-liners in Iran would love to attack Saudi Arabia, they aren’t suicidal. On Sunday, Iran’s supreme leader, Ayatollah Ali Khamenei, said in a religious speech that “divine vengeance will befall Saudi politicians” for the death of Sheik Nimr. In doing so, Khamenei essentially passed the buck from Iran to God to exact vengeance.

Khamenei knows that any attempt by Iran to disrupt the oil trade in the Persian Gulf would lead to an immediate response from the U.S. fifth fleet based in Bahrain. During the Iran-Iraq war, U.S. naval vessels shielded Kuwaiti oil tankers carrying Iraqi crude through the Persian Gulf. Tanker attacks by Iranian aircraft came to a halt quickly thereafter. They pretty much ceased all together following Operation Praying Mantis, in which U.S. military delivered a crippling blow to the Iranian navy. While the U.S. is likely not happy with the Saudis angering Iran, they also won’t likely stand for an Iranian assault on one of their most important allies.

Iran and Saudi Arabia have been at odds ever since the Arab invasion of Persia back in the 7th century. But both sides know how much they can get away with without rocking the boat. And this isn’t the first time Iran has stormed and torched the Saudi embassy. Back in 1987, the deaths of Iranian pilgrims on Hajj in Saudi Arabia led to a similar attack by hardliners in Tehran. Saudi Arabia cut off diplomatic ties with Iran and the two shook their fists at each other, but nothing came of it. Expect a similar outcome today.