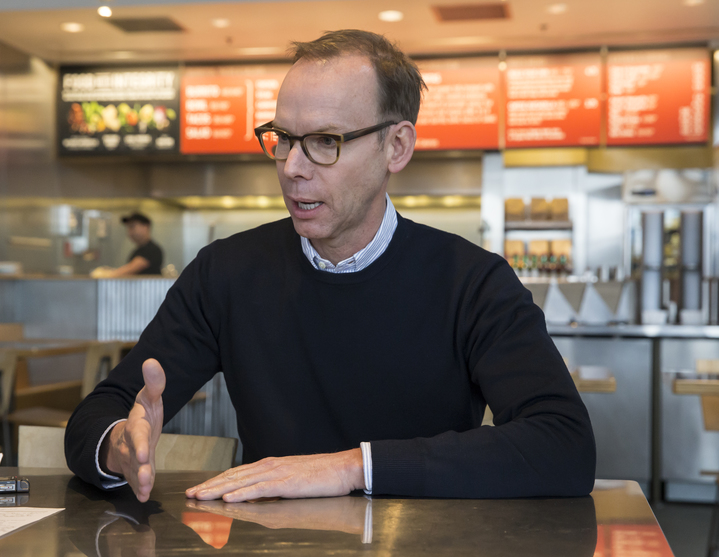 Chipotle Mexican Grill founder and CEO Steve Ells speaks during an interview with the Associated Press in a Chipotle restaurant on Tuesday Dec. 15, 2015, in Seattle. Ells was visiting restaurants in the Pacific Northwest to discuss new food safety protocols with employees after an E. coli outbreak sickened 50 people in the Northwest. (AP Photo/Stephen Brashear)
Stephen Brashear — AP

Chipotle (CMG) founder Steve Ells is continuing his campaign to assure customers his restaurants are safe.

The company took out full-page advertisements Wednesday in 61 newspapers around the country, apologizing for the recent food-borne illness outbreaks that have been linked back to the burrito chain. A recent norovirus outbreak in Boston has sickened more than 140 people, while prior to that an E. coli outbreak affected 52 people in nine states.

“I’d like to take this opportunity to apologize on behalf of all of us at Chipotle,” wrote Ells. “The fact that anyone has become ill eating at Chipotle is completely unacceptable to me and I am deeply sorry.”

In the bare-bones ad, which prominently features the text with only a grey image of the company’s logo, Ells said that he is reviewing Chipotle’s food safety processes and is implementing changes. He went on to share specific steps the company is taking “to be sure all of the food we serve is as safe as it can be.”

Ells said the company ran a “farm-to-fork risk assessment” of every ingredient and restaurant protocols in partnership with “preeminent” food-safety experts. The chain is implementing wide-reaching testing of ingredients for contaminants, which he said is unprecedented for the industry due to the large quantity of tests. Chipotle will also provide more food safety training for employees and add cleaning steps to ensure its kitchens are germ-free.

“In the end, it may not be possible for anyone to completely eliminate all risk with regard to food (or from any environment where people congregate), but we are confident that we can achieve near zero risk,” Ells wrote.

The ad ran in major newspapers across the U.S., including the New York Times, Wall Street Journal, and USA Today—the top three U.S. newspapers by circulation. Those three publications alone reach an average of 8.5 million readers every day, according to data from the Alliance for Audited Media.

Ells also appeared on the Today Show last week to apologize for the outbreak, and Chipotle (CMG) has warned that the problems will likely dent sales this quarter. Same store sales could drop between 8% and 11% because of the incidents.