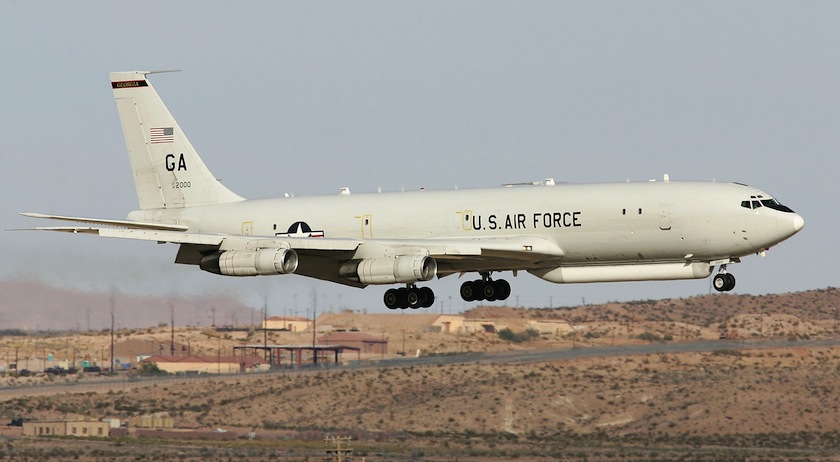 NELLIS AFB, NV - APRIL 25: A United States Air Force E-8 JSTARS (Joint Surveillance and Target Attack Radar System) lands at Nellis Air Force Base while participating in the Joint Expeditionary Force Experiment 2006 (JEFX 06) April 25, 2006 in Las Vegas, Nevada. JEFX is a biannual test of new systems and technologies by every branch of the military in an attempt to speed their introduction into the modern battlefield. This year's tests involve about 1,400 personnel from the United States, Great Britain, Canada and Australia studying new technologies during mock combat over the Nevada desert and center on finding better ways to communicate critical information between armed forces. (Photo by Ethan Miller/Getty Images)
Photograph by Ethan Miller — Getty Images

The Pentagon’s chief arms buyer last week approved the next step in a multibillion-dollar competition to replace the 16 existing Joint Surveillance Target Attack Radar System aircraft, or JSTARS, which have flown over 100,000 combat hours and are approaching the end of their service life.

James said in a statement that the Air Force’s plans would allow replacement of one of the highest priority weapons programs for U.S. military commanders at an affordable cost.

Three teams are competing for the work: Northrop Grumman (NOC), which built the existing planes and is teaming with General Dynamics (GD); Lockheed Martin (LMT), which is working with Raytheon (RTN) and Canada’s Bombardier; and Boeing (BA).

He said the Air Force would also begin efforts to award up to two contracts for work on new radar systems, and was on track to release a draft request for proposals for the engineering and design phase of the program in early 2016.

“JSTARS recapitalization is absolutely necessary for the Air Force to continue providing a combat-proven capability to the warfighter,” Leese said, noting that the cost of maintaining the planes was growing as the fleet aged.

Senator Johnny Isakson and 12 other senators urged Defense Secretary Ashton Carter in a letter dated Friday to protect funding for the JSTARS program in the fiscal 2017 budget request that is being finalized this week.

“Due to high demand over the years and increasing maintenance requirements, it is becoming increasingly difficult and costly to keep aircraft available to meet operational and training requirements. This leaves a growing capabilities gap that is unacceptable,” the senators said.