retail ·How I Got Started

No Rest for the Mattress Firm 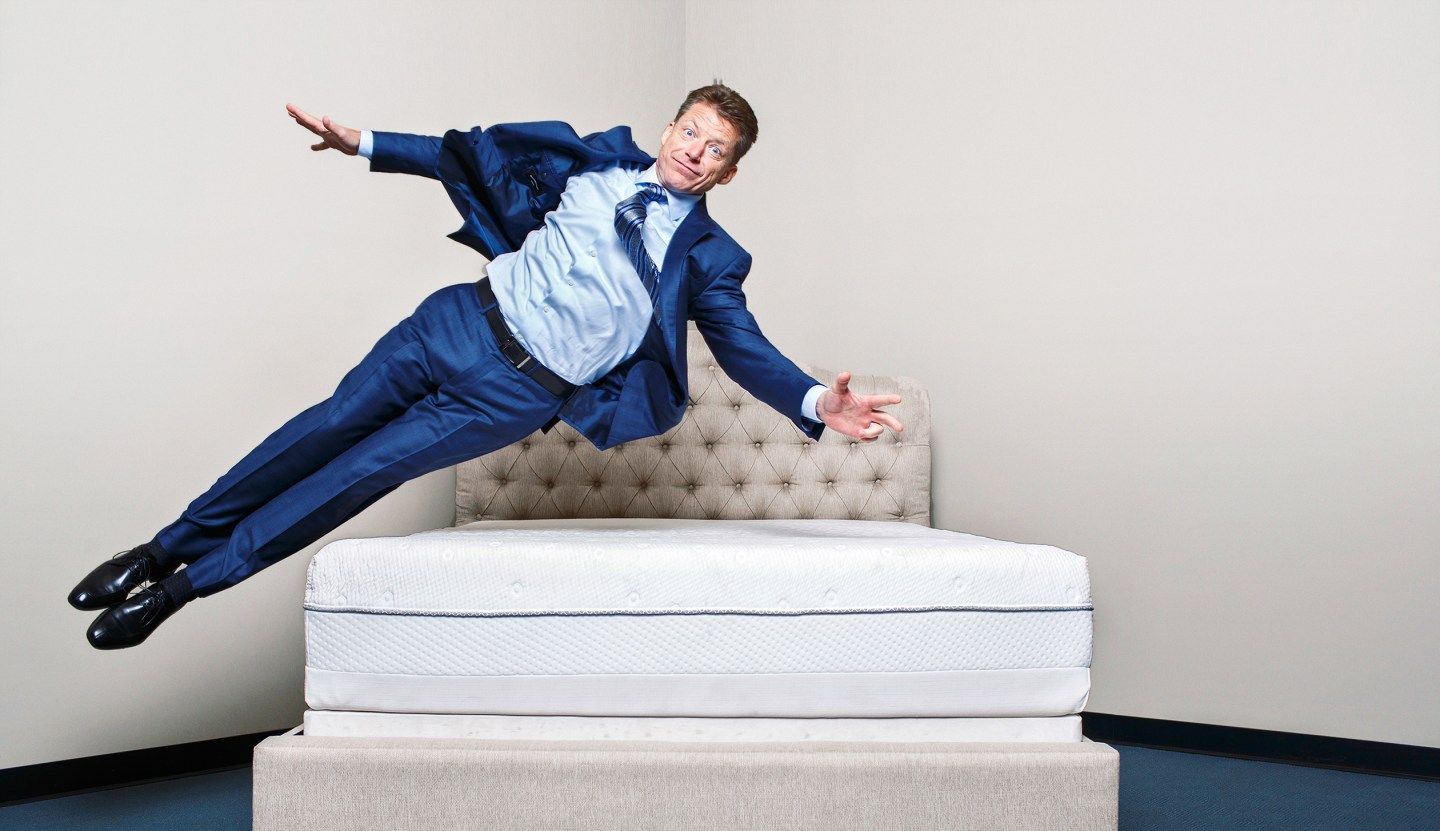 Steve Fendrich, co-founder of Mattress Firm is photographed at one of the company's retail stores in Alpharetta, Ga. on Wednesday, November 18, 2015.
Photograph by Melissa Golden for Fortune Magazine

Nobody knows the value of a good night’s sleep better than Steve Fendrich, 54. With two college friends, he opened a small mattress store in Houston in 1986, scraping out a living by transporting beds on the top of his car and heating frozen meals on its dashboard for lunch. That store grew into Mattress Firm, the largest specialty mattress retailer in the U.S., with more than 2,400 stores in 36 states after an acquisitions binge (not counting the recent news that it plans to acquire the Sleepy’s chain). It estimates sales of $2.4 billion in 2015 and profits of $50 million. Fendrich’s story:

I didn’t know there was such a thing as the mattress business when I graduated from college. I grew up in Sioux Falls, S.D., and got an accounting degree from the University of South Dakota, where I met Harry Roberts and Paul Stork, my future partners in Mattress Firm (MFRM).

Harry had a brother-in-law, Jack Smith, who owned the American Bed Co., a chain of mattress stores in Houston. The three of us went to work for him and learned the business.

It was the infancy of bedding specialty retail, and in 1983 I ran an American Bed store in Chicago. In 1985, I became comptroller of the company and moved to Houston. As I dug into the financials, I saw that capital needs were greater than the cash coming in.

Paul, Harry, and I decided we could do better. So in March 1986, I left, and Harry and Paul soon followed. American Bed filed for bankruptcy later that year.

We were all 25 and passionate about doing things our way. We each put in $5,000, figuring we’d each get our own store eventually. Harry had his $5,000, Paul borrowed from his mother, and I borrowed $5,000 from my grandmother.

Back then, mattress stores were often in rundown areas with tile or concrete floors and mattresses encased in plastic. We persuaded a shopping center to give us space and opened on July 4, 1986. We put in carpeting and took the plastic off the floor models so customers could lie down on the actual product. We sold Sealy, Serta, Spring Air, and Dreamline, and our most expensive bed was a queen for $499.

We aimed to offer a higher level of service and a better delivery system. In Houston it took 12 days for delivery from a department store. With us, you could buy the mattress and get it the same day. When needed, I’d put a mattress on top of my car and follow the customer home.

We took a high-energy approach to selling a product that people hate to shop for. Each time we made a sale, we were so excited, one of us would call the other two and detail how the sale happened. As we expanded and managed different stores, it became, “This week my store’s going to sell more than yours.” It was fun and competitive.

We didn’t pay ourselves for the first 14 to 15 months. The most important thing was to pay our vendors and our people. There was a time in late ’86 when the brakes went out on Paul’s car. He asked if the company could loan him $400 to fix the brakes. We said no.

Paul lived a ways from the store, so he needed a car to get to work. I said, “I’ve got an American Express card you can charge it on. Hopefully, in 30 days we can pay it off.” But we couldn’t, and American Express said, “Cut up the card.” I paid the bill off over time, but to this day, I don’t have an AmEx card. It’s in my wife’s name.

Back then we lived on the cheap. We couldn’t afford a refrigerator or microwave, and since we had to be in the store from 10 a.m. to 8 p.m., we couldn’t go out for lunch. So we’d pick up Lean Cuisine frozen dinners that we’d leave on the dashboard of the car. By noon, the containers were so hot you couldn’t touch them.

We always wanted to elevate our offerings, and in 1988, Stearns & Foster came to us, wanting a partnership. That changed our price point to well over $1,000, so it was a defining moment. By the late ’90s close to 40% of our sales were Stearns & Foster, and we became a high-end store. We learned that to sell a lot of $1,000 beds, we had to have $2,000 beds in the stores so people could tell what better beds felt like.

We had failures along the way. For example, in 1990 we decided to sell living room furniture. But the merchandizing and fashion part of it was beyond our expertise. We later closed the furniture store and got back to what we do best.

We started to get offers for the business. In 1999 we had more than 250 stores and were doing $300 million in annual sales. The three of us were in our thirties with young families when Malachi Financial made an offer. We thought long and hard and took it.

I became a consultant, then CEO of Sleep Country USA, which was later sold to Simmons Bedding. In 2008, Simmons promoted me to president and COO. Two years later we restructured the company and sold it.

I was out of a job, and the first person I called was Steve Stagner, Mattress Firm’s new CEO. Steve wanted to accelerate growth and made me chief strategy officer. He wanted Paul and Harry back too, so now Paul runs our Mattress Pro chain, and Harry and his brother own close to 40 stores as franchisees. In 2011 we took Mattress Firm public.

I’m happy to be the founder and not at the helm. I work on mergers and acquisitions. I had a wonderful partnership with Paul and Harry. We created a lot of jobs. We’ve got great people taking care of our baby now, and I feel good about that.